Wood Bison Thrive in 2016
Only One Known Mortality 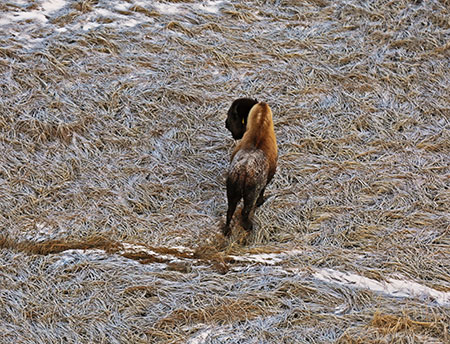 Wood bison 124 looking healthy and fat as she forages on sedges several miles outside of Quinhagak, Alaska

In mid-April of 2016, ADF&G biologists spotted the first wild-bred, wild-born, wood bison calf in over a hundred years in the Lower Yukon/Innoko area. This milestone marks the beginning of a viable, wild, and growing population of wood bison in the USA and Alaska.

The stock used to reintroduce wood bison to Alaska had been in captivity over many generations (since 1957) in order to save this unique northern subspecies from extinction. Some people had doubts that the bison would become wild again and prosper in their old homelands after such a long time behind fences with supplemental food, water, and shelter.

In the first few months after release, some bison died as natural selection chose the strongest and culled the weakest. Now, the bison fit for life in the wild remain, and robust young calves are increasing the population of the 130 that were released. 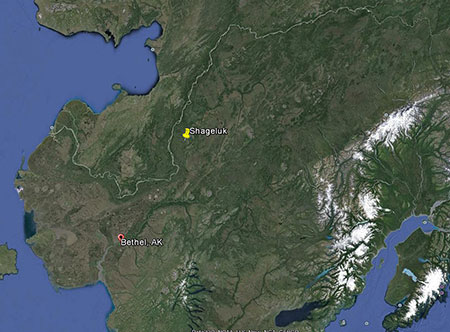 Southwestern Alaska has a wealth of good wood bison habitat. In 2015, 130 bison were introduced near Shageluk. The Yukon River is the prominent river crossing the photo from the top right corner to the left edge. While most of the herd is within 50 miles of Shageluk, some animals have ranged north along the Yukon and even swum the river multiple times, and one bison traveled more than 200 miles south to the Bering Sea coast south of Bethel.

The summer of 2016 was rainy for the wood bison herd, with high water covering some of the grazing meadows available to them in 2015. However, vast areas of un-grazed habitat were still available. The daily movements of the wood bison have settled somewhat since 2015. During the summer of 2015, the bison were racing around their new home, exploring what was available to them in the form of food, cover, and other habitat requirements. This exploration paid off in the winter of 2015-2016, because the bison were able to feed in high density sedge meadows, pass through the winter with very few mortalities, and come out of the winter in good body condition.

During summer 2016, movements of the wood bison stabilized and appear to be more in line with normal movements of other wild bison herds. In June of 2016, the wood bison of the lower Innoko and Yukon Rivers were already grouping up for rut. Wood bison biologist, Tom Seaton, hiked in to observe several groups in June and found body condition to be excellent on most animals. Rut occurred in July and early August, and with the good body condition, stable movements, and large groupings, a prosperous calving season is expected in 2017. 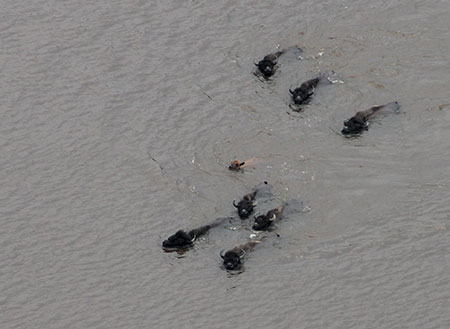 Nearly 99 percent of the bison have stayed within 50 miles of their release point near Shageluk. Wood bison number 124, a young cow, was the exception. She traveled more than 200 miles south of the main herd before she was illegally shot and killed on Jan. 27, 2017, near the village of Quinhagak. Alaska Wildlife Troopers are investigating the incident, and a local man has been charged.

A wanderer that captured the hearts of rural communities across western Alaska, Bison 124 was a young cow known for its extensive exploration of the Yukon, Kuskokwim, and Innoko drainages. Residents of Grayling, Anvik, Shageluk, Holy Cross, Kalskag, Aniak, Russian Mission, Akiachuk, Kwethluk, Tuntutuliak, Eek, and Bethel welcomed the animal and enjoyed watching it explore new habitat.

"This is a sad loss,” said Tom Seaton, a state wildlife biologist who oversees the wood bison restoration project. “Many local residents have called to express their disappointment with this restoration setback." 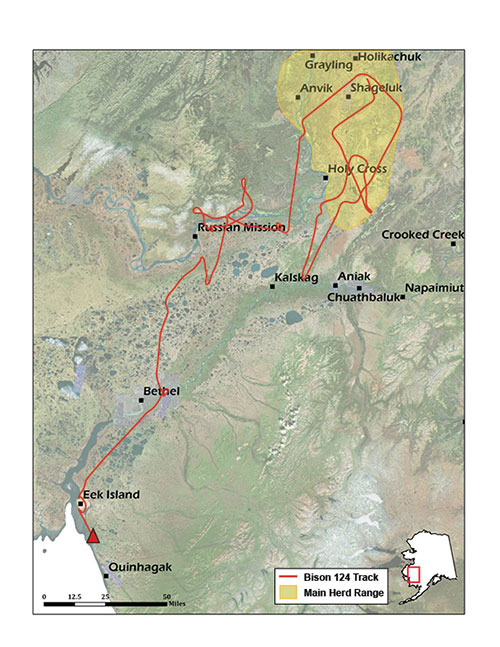 The travels of Wood Bison 124

In her travels, she found many areas of good wood bison habitat. She spent the summer of 2015 away from the main herd, ranging south along the Kuskokwim River between Aniak and Kalskag. Then she returned to the main herd near Shageluk in late summer 2015.

In the fall of 2015, she began traveling south again, away from the main herd. She spent the first half of the winter near Russian Mission, then the last half of the winter (early 2016) near Kwethluk. She continued moving south and by August of 2016, she had been sighted by folks near Aniak, Kalskag, Bethel, and Tuntatuliak. In late August of 2016, she was all the way down to the mouth of the Kuskokwim, on Eek Island. During her travels, citizen scientists in these various communities documented her movements, provided pictures, and reported her location as well as other important information like body condition.

She continued moving south. During an aerial survey in November 2016, biologists saw her near Quinhagak on the coast of the Bering Sea. She apparently remained in that area for several months before her death.

The landscape near Quinhagak. Wood Bison 124 is near the lower right corner.

While bison 124 was exploring the Bering coast, 98 percent of the herd has remained within 50 miles of their release point near Shageluk. During the last eight months of 2016 there were no known mortalities in the herd, an amazing thing for any group of wild animals. The population is increasing and currently has about 138 individuals. The excellent body condition of these animals suggests that this experimental population is well on its way to succeeding in the wild.

Visit the ADF&G website to learn more about the wood bison reintroduction, and wood bison as a species.