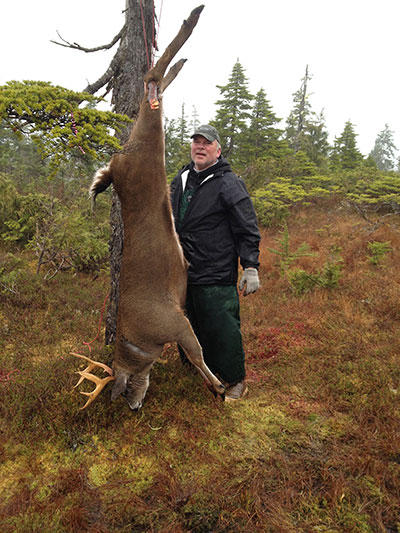 Author Mark Stopha with a Southeast Alaska Sitka black-tailed deer. For Alaska residents, proxy hunting regulations are in place allowing resident hunters to harvest certain fish and game species for residents with a disability or who are at least age 65.

Southeast Alaska provides year round harvest opportunities. Deer and moose hunting in the fall, trapping in the winter, hooter hunting in the spring, and fishing in the summer. Spring and summer are fiddlehead, berry and mushroom picking time, too, along with all the beach greens. If you accept rain as something to embrace, you’ll love it here. Southeast Alaska's wild resources are so abundant they provide a surplus that allows those who can harvest to share with those who can’t. Hunting for others extends my time in the woods and satisfies a community need.

For Alaska residents, proxy hunting regulations are in place allowing resident hunters to harvest certain fish and game species for residents with a disability or who are at least age 65. For deer, a proxy hunter and the beneficiary both get their hunting licenses and harvest tickets, and jointly submit a Proxy Hunting Authorization form at an ADF&G office or other issuing location. Proxy hunters carry both their own licensing and the beneficiary licensing while proxy hunting. The proxy hunter must also destroy the “trophy value” of the deer antlers. In addition to deer, proxy hunting is allowed for caribou and moose in some areas, as well as for some fish and shellfish. My description is a summary only. The regulations are specific and detailed, so be sure you read them.

Of course, you can share your harvest with anyone you like under your own license and bag limits as well.

We proxy hunt for Paul, an 80-something in Petersburg. When I say “we”, I mean my group of extended family and friends who participate in the harvesting process - transport by boat to a hunting spot, hunting the deer, packaging the meat, and delivering the meat. Once I started proxy hunting, it become a long term commitment. People you hunt for look forward to receiving venison. And what’s better than spending more time hunting deer?

I met Paul in West Africa of all places, when he came to visit his daughter in Sierra Leone. She and I were both working in the fisheries sector in the Peace Corps. When I returned to Alaska, I renewed my friendship with them and they've been like family ever since. The daughter went on to become the first female Rhode Scholar from Alaska and lives with her family in Kenya. Paul's other daughter set nets in Yakutat in the summer and lives with her husband, an NPR reporter who got his start at KFSK in Petersburg, in the Middle East the rest of the year. Pretty big stuff for Petersburg kids raised by a teacher who still lives in the house he built. 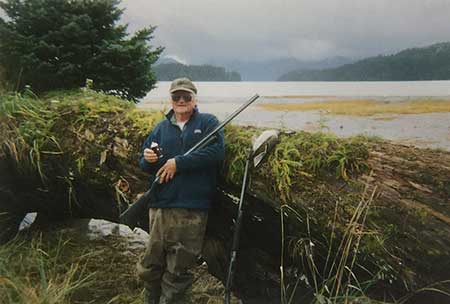 We used to make an annual duck hunting trip to Paul’s secret spot on the Stikine River flats. Over the years, that tradition transitioned to watching the Superbowl every year in Petersburg. He always makes a fuss to cook venison when I visit.

Paul lived a life of fitness in the outdoors. He ran the two-mile in track at Cal in college pursuing his geology degree in the 1950's. During his college summers, he was a smoke jumper in Montana and Idaho. When he graduated from college, he served in the Army Corps of Engineers clearing mine fields and building bridges in Korea. After the war, he came to Alaska and was on the team of the first ascent of Mt. La Perouse while working as a geologist. He surveyed the pipeline from Glennallen to Thompson Pass in 1975 and 1976. Only after all that did he become a high school teacher at Petersburg High school. He started a surveying class that culminated each year in a helicopter trip to LeConte Glacier to survey the glacier. The data he and his students collected still provides baseline climate change information decades later. He was even named Alaska Teacher of the Year, which I only found out after happening upon a plaque on a back wall in his home. He's one to brag about his students, his daughters, and grandsons, but pooh-pooh’s his own accomplishments.

He and his late wife were avid hunters who kept their freezer stocked. As he got up in years, hunting got restricted to duck hunting, which is about when I came along. As the years went by, he gradually gave that up, too. He's still in good health and commercially hand-trolls for salmon, with his family rotating in as deckhands. If you ask him old he is, he'll say "I'm 84, but I have the body of an 83 year old". That always kills me.

I approached him a decade ago about proxy hunting deer. His daughters were fishermen, but not hunters. I knew he missed getting deer like he used to. It was somewhat of a delicate conversation. Hunters and athletes see old age coming but can't look it in the eye. After some thought, he agreed.

If you are used to spending your time gathering food, you make a trip to the pantry or the freezer for your protein. Going to the store means buying meat raised under unknown conditions, fed unknown food, by an unknown farmer. Most people don't think of it this way, of course, because to them, the store is where food comes from. For a hunter, thought, buying meat at the store could make you feel a just a little less self-reliant than when you got your own. You know were Tongass venison comes from. What it ate. It lives in the same woods as you do. Although the ability to harvest may pass, the link to the land remains strong. 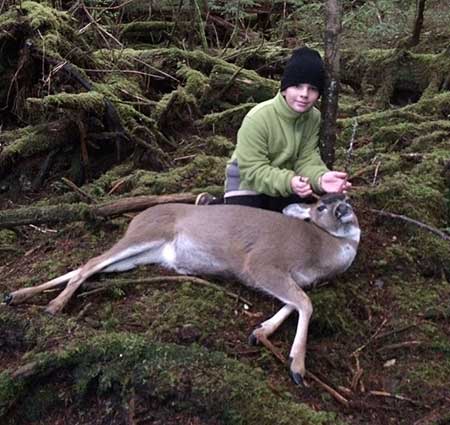 I’m sure it was best when he harvested it himself. He remembers the boat ride to the beach. Anchoring the boat offshore. Rowing the punt to the beach. Climbing a familiar trail with his wife through the rainforest to their favorite muskeg. Blowing the deer call. Seeing the movement first. Then the antlers working their way to them above the brush. When the deer was in full view, a clean shot, never hearing the gun fire or feeling the kick. They'd dress the deer, butcher and load it into their packs, and make the trek back to the boat. As he eats the venison now, he knows I got it the same way, and never see it as a chore. It’s the reason we live here.

We both take satisfaction in the meat exchange. Me, of providing for a friend. And him, for the health the lean protein provides for his still healthy body. The savory flavor of the meat he’s eaten much of his life continues his lifelong connection to the land, community and friends. These connections only grow stronger as the years go by, even as his knees, and now mine, creak a little more.

We also share our deer with Tom, a Marine who grew up in Juneau and served six tours in Iraq and Afghanistan. He doesn't live in Alaska anymore. He needs to be near specialized medical attention due to his war injuries. He's the first veteran injured in war who I knew was from the same town as I was. I grew up in the 1970's in northern Appalachia in the little town of Bolivar, New York. I only found out in my adult years that many of my mentors and cousins were Vietnam War veterans. They never talked about it then and many probably still don't, except to each other. They were our Little League and Midget Football coaches and umpires. They took us fishing. Their wives sold hot dogs in the concession stand. Their volunteering made my little town a great, safe place to grow up and just be a kid.

I was a bit hesitant to ask Tom, a stranger who I knew was in peak physical condition before his injuries, if he’d like some salmon and venison. As a member of my community, I hoped to share what I could with him, even though I'd never met him and regardless of what the war was all about. I remembered what all the Vietnam veterans had done for me growing up. I worked on the same floor with his Aunt Laurie. She helped me get in touch with her nephew and his family. Their reply was- of course! 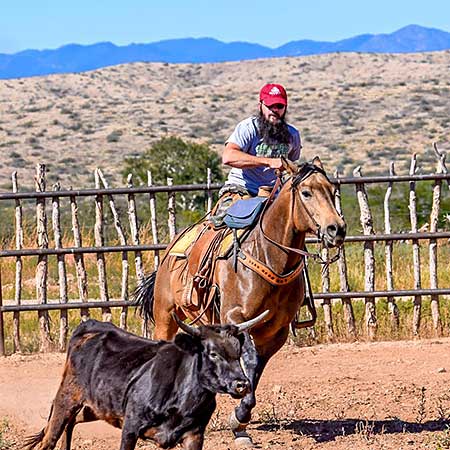 We shipped several boxes to him at Walter Reed. He shared the contents of venison and smoked salmon with his fellow patients.

After years of rehab, he's now got a house in North Carolina designed to allow him to live independently. His parents also moved there from Juneau to help him in his recovery. I've learned many lessons from sharing fish and game with the Marine. The first is that a soldier's injuries don't just affect him. His mom and dad have been with him since he returned from Afghanistan. First at Walter Reed. Now in North Carolina. The parents alternate as they can between jobs in Juneau to both make a living and care for their son. The second is attitude is everything. Tom is now riding a horse, learning rodeo (see photo). The third is that Tom is not a soldier. He's a Marine. In Tom's words "nobody knows this but we are particular about that."

Community Service takes many forms. Many of these activities mean signing up for something, working in a crowd, and attending meetings with strangers. Many hunters are more comfortable alone or in smaller gatherings of friends and family. Hunting for others provides an intimate community service, out of the spotlight. Just you and your neighbor. Of the gathering activities such as hunting, fishing and berry picking - hunting seems to be the first to go with the onset of age or a loss of mobility. In addition, you can buy salmon and berries at the store. Wild venison only comes from a hunter. The gift of venison fulfills a year round need and is appreciated at every meal.

More on Proxy hunting in Alaska.http://www.adfg.alaska.gov/index.cfm?adfg=huntlicense.proxy

Mark Stopha is a former salmon troller and direct marketer. He’s currently a fishery biologist for ADF&G in Juneau.