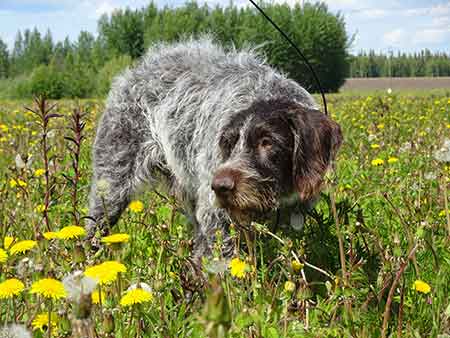 Kobuk on point: Kobuk is one of many pointing dogs volunteering in the summer of 2016 to locate ptarmigan chicks. Staff with ADF&G’s Small Game Program have been working with passionate dog trainers, ADF&G staff, and colleagues from Norway to develop the first formal brood survey project throughout Alaska.

Mack was running over the high alpine grass and crowberries with his nose to the ground. As his search intensified he focused entirely on the scent. After mere seconds Mack froze, dead in his tracks, head swung to the left, nose pointing at the target. Mack and his owner were conducting a high alpine brood survey for ptarmigan, and he had just located one hen willow ptarmigan and her brood of six chicks. Mack is no ordinary ADF&G volunteer, he is one of many pointing dogs being used by the ADF&G’s Small Game Program to conduct the first year of brood surveys for ptarmigan and grouse in Alaska.

Brood surveys can be successfully used by grouse and ptarmigan managers to better document chick survival and recruitment into the hunted population (population productivity). The primary goal is to estimate the number and size of broods on any given year, particularly in areas that are heavily hunted. The first two to three weeks after a chick hatches can be the most challenging period of their life. Grouse and ptarmigan broods can suffer 40-100 percent mortality depending on weather, predator abundance, food availability, and cover. Hunters and managers alike can be much better informed about population productivity by estimating the number and size of broods immediately prior to the hunting season.

Over this past winter, Program staff members have been working with passionate dog trainers, ADF&G staff, and colleagues from Norway to develop the first formal brood survey project throughout Alaska. Many of the volunteers are part of large organized dog training groups like North American Versatile Dog Association, the Arctic Bird Dog Association, and the Verein Duetsch-Drahthaar Group North America; others are volunteers unaffiliated with any club but excited to help and to offer their dogs to support the management of Alaska’s upland game birds. 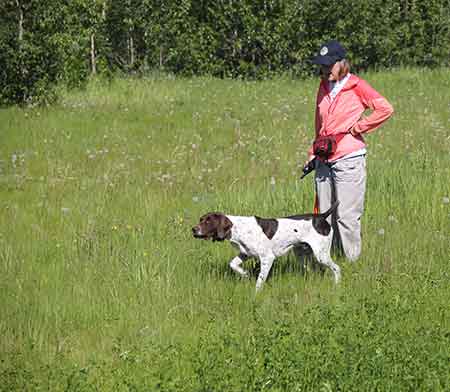 Over the winter of 2015-2016, nearly 20 dog trainers and avid grouse and ptarmigan hunters signed up as volunteers. The data they collect give biologists insight into estimates of population productivity and areas used by broods.

In Norway, these surveys are used as the primary means to monitor grouse and ptarmigan populations. For nearly fifty years, 500 volunteers have completed surveys in their local communities and have used it as an opportunity to train their dogs. Our Norwegian partners were extremely helpful in developing the current protocol in Alaska.

However, without the engagement of passionate local Alaskans this project would never have hit the field. Over the winter of 2015-2016, nearly 20 dog trainers and avid grouse and ptarmigan hunters signed up as official State of Alaska volunteers. There were several meetings with the group to discuss and tweak the protocol, timing and logistics, and finally drive out to the field locations to conduct surveys in late June and July.

For the first year of the project, Program staff focused on locations that receive some of the heaviest grouse and ptarmigan hunting pressure. Specifically, we were interested in documenting brood numbers and size for rock and willow ptarmigan near Eagle Summit (Steese Highway), Denali Highway, and Hatcher Pass. We were also interested in sharp-tailed grouse broods near Delta Junction.

By late June and July we were ready. The weather was cooperating and broods seemed to be experiencing ideal conditions for high survival rates. Volunteers (dogs) and their owners were ready and excited after having many months away from pointing grouse and ptarmigan. Once at the survey locations, the dogs were eager to show up their owners and begin the work.

By the end of the season, volunteers had walked nearly 90 miles of survey transects; who knows how many miles the dogs covered… It’s safe to say the dogs deserved an extra helping of dinner at the end of each day. The dogs were highly successful and pointed many brood groups. Their owners, in addition to walking up and over many steep ravines, shrubby creek bottoms, and wet grass were also able to provide very positive feedback on how to make the project more successful. 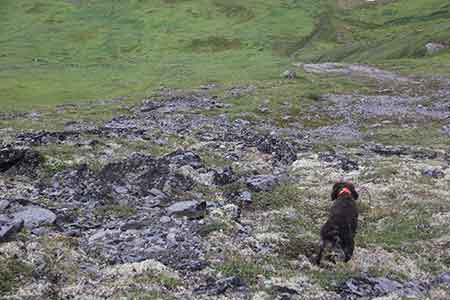 For the first year of the project, Program staff focused on locations that receive some of the heaviest grouse and ptarmigan hunting pressure - documenting brood numbers and size for rock and willow ptarmigan near Eagle Summit (Steese Highway), Denali Highway, and Hatcher Pass; sharp-tailed grouse broods near Delta Junction.

The data that these volunteers collected will give Program staff and local ADF&G biologists considerably more insight into these popular resources. Biologists will now have yearly estimates of relative abundance as well as population productivity. In addition, biologists will have a better understanding of areas utilized by broods and be much better informed when interacting with the hunting public.

The Program has begun to rely heavily on passionate, engaged, and informed volunteers to complete several large projects. Despite being a very “small” program (two fulltime staff statewide), it has been able to provide a considerably larger value to the hunting public, managers, and the regulatory process through the countless hours and dedication of its volunteers. It is these volunteers that have become the ambassadors for the Alaska Small Game Program. This year alone volunteers have logged nearly 500 hours for the benefit of research, spring breeding surveys, and of course summer brood surveys.

If joining this tireless team interests you or someone you know please contact your local small game biologist in Fairbanks (Cameron Carroll, 907.459.7237) or Palmer (Rick Merizon, 907.746.6333).