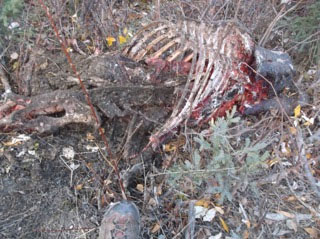 A caribou carcass next to the Taylor Highway near Eagle.

The gut piles on the road near Eagle have gotten so bad Teresa Balboni can’t even walk her dogs.

“We’ve never seen so many black bears here before,” she wrote. “All these people leaving carcasses right on the road, it brings the bears right in.”

She said at times it was so bad her husband, who drove a snowplow and road grader for the Department of Transportation, “…would have to grade the carcasses off the road, that's how heavily burdened the road was with kills.”

Most hunters in Alaska are not dressing out or butchering game animals on a road. Some are, and it can be a problem. In this case, caribou hunters along the Taylor Highway in eastern Interior Alaska are the culprits, but the problem occurs throughout Alaska and is not limited to caribou. The fix is simple.

“I tell people that I run into on the Taylor Highway, ‘Don’t gut your animal on the road or the side of the road - drag it into the woods, away from trailheads or campsites and campgrounds,” said state wildlife biologist Jeff Gross, who is based in Tok. “It’s not that heavy an animal. That’ll keep viscera off the road, and it’ll keep the majority of the blood off the road.”

Gross said it’s a chronic problem on the Taylor, which runs from Tetlin Junction near Tok to Eagle, near the Alaska-Canada border. It is particularly problematic during the fall caribou hunt which takes place right along the highway.

“Road hunting is real popular for Fortymile caribou,” he said. “Preferably they’d be shot well off the road, but we know that’s not always the case.” 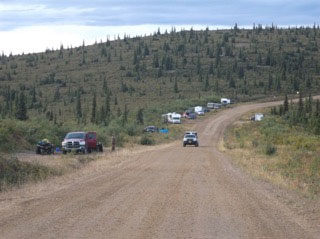 “It puts a real negative image in tourists’ heads about hunters and hunting in Alaska when they’re passing gut piles in and on the road,” he said. “Plus it can draw predators. It’s up to hunters to put a good face on hunting. Unfortunately around Tok we also have a number of places where people discard carcass remains just off the road, within a quarter to half-mile from peoples' residences.”

“Hunters can go to a landfill. Or in the Interior there are sparsely populated areas well away from communities where hunters can discard carcass remains in the woods. But hunters should make sure it’s well away from any public road, trail or campground. Just use common sense.”

In Southeast Alaska, the biggest problem is fish-related waste. In Juneau, it’s illegal to hunt big game or shoot within a quarter-mile of a road, so hunters are unlikely to be dressing game by a road.

“A lot of the calls we get are fish carcasses,” said Juneau-based wildlife biologist Stephanie Sell. “It smells horrible, and it attracts bears. We do get some calls for carcasses and bones, and sometimes people wonder if it’s human remains. There are a few problem hot spots where people will dump a carcass, and we’ve been called about bones right in town. We encourage people to drag a carcass as far off the road as possible where it won’t be an attractant issue.”

The sea is also an option, she said. “We live on the ocean, and you can dump them overboard. Guts will float, so puncture them. It’s kind of gross but it’s got to be done. A hide will float. You’ve got to consider if it might wash up somewhere around people.” 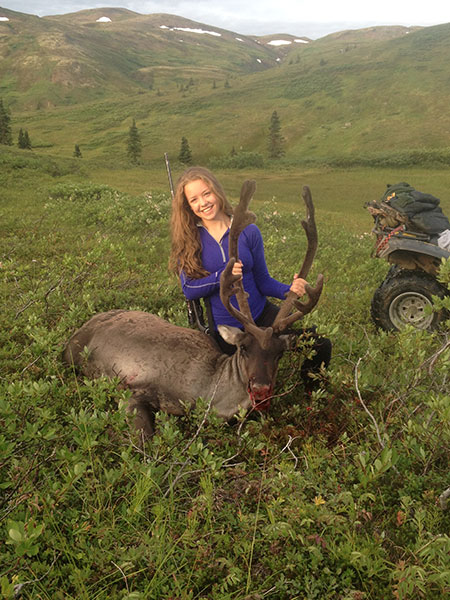 In many parts of Alaska, away from homes and camps, carcass disposal is not an issue. Sarina Mancari, 15, and her first caribou, harvested in Unit 13. Steve Voth photo

Freezing is a great way to dispose of anything smelly. Double-bag it, freeze it, and then put it in the trash on the day of pick up.

In Anchorage and the Matanuska-Susitna Valley, where large numbers of people live in close proximity to bears, illegally discarded fish waste appears in vacant lots, in greenbelt parks, and on local lakeshores.

“We had one instance a couple of summers ago where a guy got charged by a brown bear off of Fairview Loop outside of Wasilla,” said Palmer wildlife biologist Tim Peltier. “We went in to investigate and found the bear had been defending a pile of (illegally discarded) salmon carcasses.”

Anglers and dipnetters on the Kenai and in Southcentral have good options for dealing with fish waste.

Fish waste can also be deposited at other Kenai Peninsula transfer facilities, including those in Cooper Landing, Kasilof, and Ninilchik, but in smaller quantities; all fish waste must be bagged in plastic trash bags with a limit of two bags dropped off per day.

Matanuska-Susitna Borough Solid Waste takes residential, non-commercial fish waste at all facilities, but it must be bagged. The central landfill location serves Palmer/Wasilla, with transfer stations located in Big Lake, Butte, and Sutton.