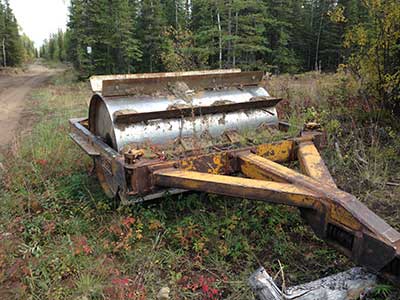 Aspen is a botanical Phoenix, flourishing in the wake of destruction. The lush growth that emerges after an aspen stand is burned or crushed is ideal for moose and grouse, and that benefits moose and grouse hunters.

The state has partnered with the Ruffed Grouse Society on a habitat enhancement project near Tok, and this winter more than 250 acres were treated. It’s the second year of a five-year project that aims to treat about 750 acres. Treatment basically means a bulldozer pushes through an aspen stand with the blade down, pulling a heavy rolling drum. The drum is studded with chopping blades. The dozer blade snaps the trees off at the base and the roller chopper breaks them up.

Peter Talus is the fire management officer for the state Division of Forestry in Tok. In fall and winter, he can turn his focus from fires to habitat enhancement. He and his crew have been working with Fish and Game and the Ruffed Grouse Society on the project.

He said this winter they treated about 16 acres per day, about twice what they did last winter. That’s with a D-5 and a D-6 cat, each pulling a roller chopper. “That’s about eight acres per machine,” he said. “It’s pretty flat here but there’s micro terrain, little drainages, and some old fire-killed material in there that’ll slow them down.” 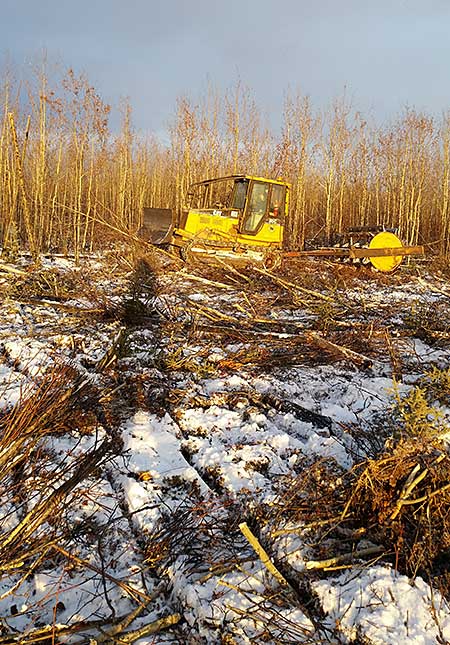 Roller chopping aspen at 15 below.

Winter is the best time for the work and produces the greatest return.

“We like it fifteen-below to zero, that’s ideal,” he said. “The stems snap really good with the blade, and the roller chopper chops everything up. The stems break easily when it’s cold and they’re green. If it’s up in the 20s or so, that’s too warm. You’re pushing stuff over and it’s not breaking. If the root base is frozen in the ground, it’s pretty easy to snap off the stem.”

He said the success of the enhancement is apparent a few years later. It’s also apparent if the treatment was done in summer or winter, as areas treated in winter are noticeably more productive. In winter, when the trees are dormant, all the nutrients are in the root system, and the root system can put it all back into the new growth the next growing season. The frozen ground also protects the root base from being torn up and crushed. 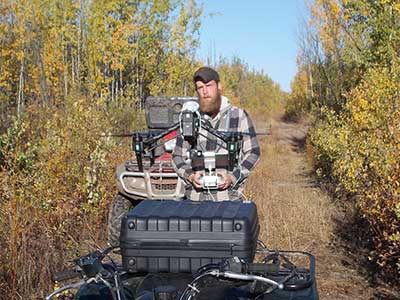 Drone operator Rion Sabin watches closely as his drone lifts off. Sabin gathered aerial images to help with project planning and to identify the species of trees in specific stands.

Jeff Wells is a state wildlife biologist in Tok. He said the treated areas are blocks of land ranging from five to 40 acres in size. They used an aerial drone to help identify the blocks.

“The reason a drone was used was because we’d identified this general area to do some habitat work, then we needed to identify specific areas to roller chop,” he said. “We had satellite imagery, but some was old, and some images were taken before the trees had leafed out. It was hard to tell if it was dominated by aspen or spruce, and we want to target aspen. We needed more up to date imagery taken at a time when there were leaves on the trees. “

“We contracted an individual here locally to fly the drone and take photos. He’s got it hooked up to an iPad, so essentially whatever the camera is seeing you’re seeing as a live feed on the iPad. Then you just capture the stills and bring them into ArcGIS to identify areas to rollerchop.” 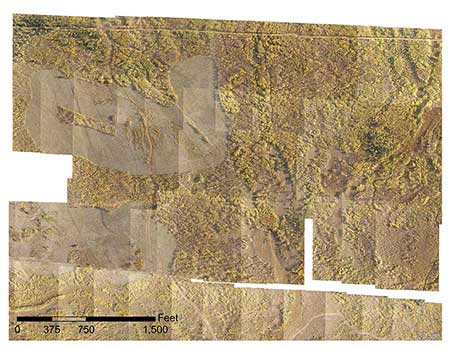 Photos taken by the drone creating a composite image of the landscape. The smoothed-over areas have been treated.

He said about 120 acres were treated last year, so close to 400 acres have been treated so far. The habitat work is within the area burned in the 1990 Tok River Fire, and the result will be a mosaic of habitat. Ruffed grouse rely on aspen stands that are a mixture of age classes. The diversity of age classes provides different things to grouse throughout the year. Younger, denser stands of aspen provide excellent cover for broods of chicks in summer, hiding them from predators. Older aged aspens provide breeding and wintering habitat.

In winter grouse are primarily eating buds and catkins. In the fall they eat berries and forbs – low-growing green plants. In the spring during the breeding season male ruffed grouse are drumming and need drumming logs and overhead cover from avian predators. Young grouse need good sources of protein and rely heavily on arthropods in their first few weeks, especially grasshoppers. They need good cover as well as food. Cover is important to ruffed grouse, especially in the summer. 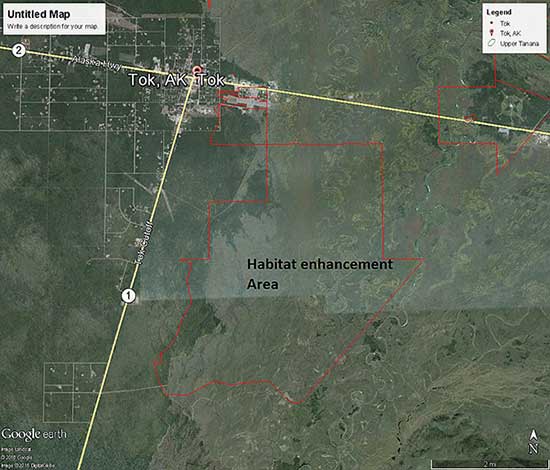 This Google Earth image shows the Alaska Highway running diagonally across the center of the picture, and the Glenn Highway coming up from the south and intersecting at Tok. The light area east of Tok (basically the entire right half of the image) is the 1990 fire, known as the Tok River fire. That area in the upper right corner that looks like a compass rose is an old coast guard Loran station. The big river is the Tanana.

Wells said the habitat work will benefit the local moose population by creating new browse in an area that is important wintering habitat. Both migratory and non-migratory moose winter in the lower Tok River Valley, with the migratory moose typically traveling 100-plus miles to areas south of the Alaska Range to calve and to areas within the upper Tok River to rut.

The project is likely to also benefit moose hunters by potentially attracting local moose into areas accessible by highway vehicles or ATVs during the fall hunting season.

DNR has produced a very nice video of the project.