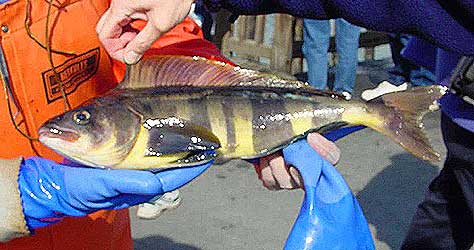 There are nearly 500 species of fish swimming around in marine waters of Alaska, including many that are rarely seen by sport, subsistence, or commercial fishermen. Some are downright uncommon or rare, some lurk in waters far offshore or deeper than most folks care to fish, and other may simply have habits that make them unlikely to get caught. On the other hand, there are a lot of fishermen out there. They are bound to catch something unusual once in a while.

Besides the uncommon resident species, some fishes are occasional visitors. The last two years seem to have generated more of these mystery fish reports than usual. The cause is undoubtedly “The Blob.” I’m not referring to the creature from another planet portrayed in the 1958 movie of that name, but rather to an area of water that was up to 10°F warmer than usual and covered most of the northeastern Pacific Ocean from Mexico to the Bering Sea during 2014 and 2015. It allowed fish that usually prefer warmer water down south to take a vacation in Alaska. 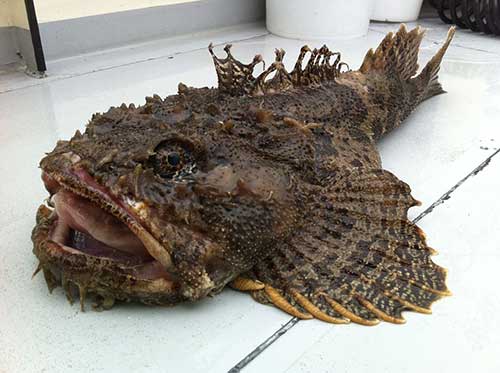 As a fishery biologist for the Department of Fish and Game, I occasionally get letters or emails from folks who catch these uncommon species and either want to know what it is or just want to brag a little. The photos they send are sometimes shot in low light, or at a bad angle, or are missing the part of the fish that is most needed for positive identification. Nevertheless, it’s a welcome challenge, and sometimes requires collaboration with other staff or outside experts to nail down the species with confidence. I thought it would be fun to pass on some of the photos and a few interesting details on these mystery fish. Let’s start with some Alaska resident species.

Atka mackerel Pleurogrammus monopterygius are a member of the greenling family Hexagrammidae. They are a handsome fish, yellowish-gray in color with dark vertical bands. Found widely throughout the Gulf of Alaska and the Aleutians, they are most common in waters southwest of Kodiak. However, every once in a while a portion of the population seems to shift to the north and more Atka mackerel show up in the sport fishery around Seward and Homer. 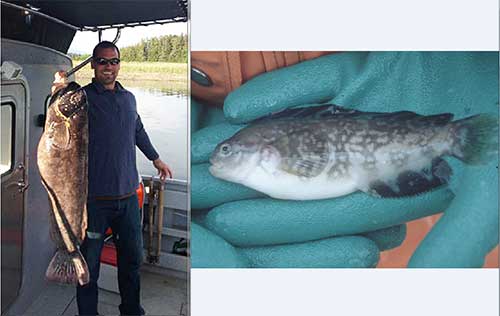 A juvenile prowfish from Prince William Sound, ADF&G photo, and angler Jon Geary of Juneau with a 33-inch prowfish he caught off the north end of Admiralty Island in 2013, photo courtesy Jon Geary.

Few things generate as much interest as a grotesque fish. In 2012 Carmen Hewitt from Seward caught a 36-inch “beauty” of a bigmouth sculpin Hemitripterus bolini in Montague Strait. Bigmouth sculpins are found throughout the Gulf of Alaska and along the deep edge of the Bering Sea, usually at depths of 50-150 fathoms of water. The bigmouth sculpin is a member of the sailfin sculpin family Hemitripteridae. They are closely related to the sculpin family Cottidae that includes 43 commonly found marine species in Alaska, including the well-known red and yellow Irish lords Hemilepidotus hemilepidotus and H. jordani.

Prowfish Zaprora silenus are interesting and unusual looking fish with a blunt face (much like a wolffish) and bright white, yellow, or blue pores on the head. They are widely found throughout the Gulf of Alaska and Bering Sea but are not commonly caught, perhaps because they feed mainly on jellyfish. Juvenile prowfish can sometimes be seen hanging out under jellyfish in nearshore waters. Jon Geary of Juneau sent a photo of a 33-inch prowfish he caught off the north end of Admiralty Island in 2013.

In 2009, Joe Tromblee caught a giant wrymouth Cryptacanthodes giganteus in a crab pot in Tutka Bay in 425 feet of water. The fish was 5½ feet long. Wrymouths are eel-like fish, common throughout the Gulf of Alaska. They burrow in soft silt, making tunnels with numerous exits and feeding mostly on invertebrates. Knowing that, it doesn’t seem so unusual to catch one in a crab pot.

The ragfish Icosteus aenigmaticus is another unusual species, and is found throughout the Gulf and in deeper waters of the Bering Sea. Ragfish have a mostly cartilaginous skeleton and are limp and flabby, but can reach lengths of 7 feet. Although the juveniles of many species look similar to adults, this is not true for ragfish. Juveniles are grayish, with deeper bodies, numerous blotches and spots, and pelvic fins. The adults are more elongate, purplish-brown in color, and lack the pelvic fins. I first received a photo of an adult ragfish in 2006 from some Southeast Alaska deer hunters who encountered a five-footer on the beach at low tide. Two adult ragfish also washed up on Lena Beach near Juneau in 2013. Sport fishermen caught juvenile ragfish near Sitka and Valdez in 2015. And another adult ragfish was found by a Department of Transportation worker washed up on the beach in Gustavus in January 2016. 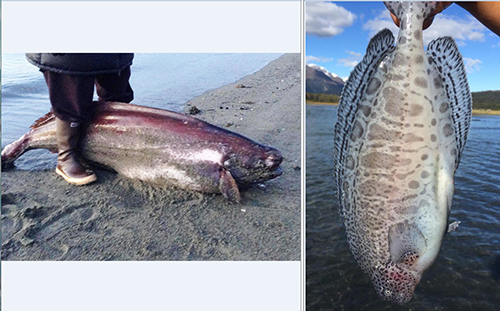 Adult ragfish washed up on a beach in Gustavus in January 2016, photo courtesy Jeff Jarvis; Fish in hand is a juvenile ragfish from Valdez Arm, photo ©2015 Pheng Thongdy, used with permission.

For more mystery fish, see part two of this article.

Scott Meyer is a fishery biologist based in Homer.