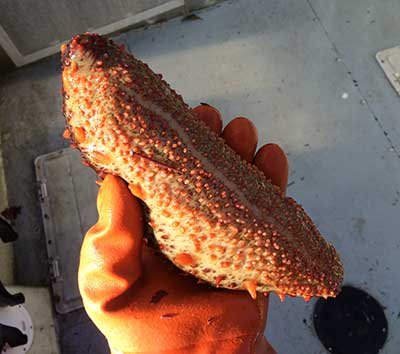 A fresh sea cucumber. California or northern sea cucumbers are found on the sea floor and spend their time getting nutrients from the mud they “lick” up with their tentacles. All photos by Scott Walker.

When people think of Alaska shellfish they usually think of king crab, Dungeness crab, snow crab and shrimp. Pictures of large fishing boats in the Gulf of Alaska come to mind. But there is another side of Alaska’s shellfish industry, small boats with small crews that battle the stormy seas of Southeast Alaska. These hardy individuals are the divers that harvest red sea urchins, California or northern sea cucumbers and the famed geoduck clam.

I don’t know how many times I have heard. “You’ve have got to be kidding me, people eat that stuff?? Yes they do, and they pay dearly to satisfy their shellfish cravings.

These “other” fisheries are classified as miscellaneous shellfish fisheries. These harvested shellfish are as desired and expensive (price per pound of roe or meat) as the choicest prime rib or the most succulent fresh lobster, when sea food markets are at high levels.

And each year, more of these “other” shellfish are consumed domestically as the United States population becomes more internationally diverse and traditional North Americans learn of their unique taste and positive health benefits.

Each of these fisheries requires that you don a thin suit of neoprene-like material and jump into Alaska’s frigid waters. You don’t see that happen on Dangerous Catch, at least not purposely. In addition, Southeast Alaska’s dive fisheries began in the fall and continue into the winter with ocean temperatures at a bone chilling 42- 45 degrees F. Once underwater, you race around collecting as many critters as you can, shoving them into a bag that you then have to drag around until it’s full. You do this as fast as you can during openings that are only a few hours in length. 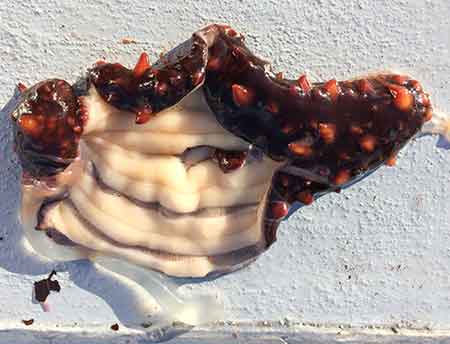 After harvest, the cucumbers are sliced lengthwise. Five strips of pure white meat can be scraped off of the inside of the sea cucumbers skin. Both the skin and the meat are sold.

California or northern sea cucumbers (Parastichopus californicus) are found on the sea floor and spend their time getting nutrients from the mud they “lick” up with their tentacles. They consist of a bag full of water with minimal internal organs. After harvest, the cucumbers are sliced lengthwise and a bunch of water and what little guts are present squirt out. Five strips of pure white meat can be scraped off of the inside of the sea cucumbers skin. The remaining skin is boiled and salted. The small amount of pure white strips of meat is frozen. Often times the skin is more valuable than the meat. The skin is ground up and used as seasoning in various types of soups for Asian recipes. Sometimes, the entire animal is boiled and salted. Amazon.com offers 8 oz. of dried “Alaska wild caught red sea cucumbers” for $115. In the 2015 commercial sea cucumber season, Southeast Alaskan fishermen received an average of $4.00 a pound for an animal that on average weighs half a pound and will provide a few tablespoons of meat and a dried skin the size of a ball park frank. 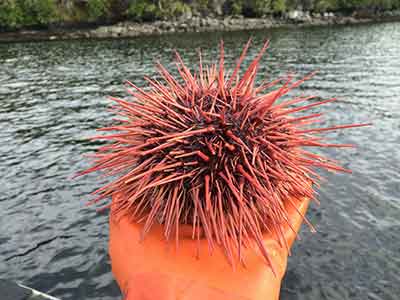 Red sea urchins (Strongylocentrotus francisanus) are found on underwater rocks and spend most of their time eating kelp. Alaska also has green sea urchins, but they tend to be too small to be commercially viable. Sea urchins consist of a hard circular shell called a “test” full of organs along with five skeins of roe called uni. The skeins of roe look like sections of a tangerine and may be brown, orange or yellow. After harvest, the urchin test is broken in half with special tongs and the skeins of roe are scooped out with a spoon and placed into a small wooden box. The value of the roe depends on its color and appearance. A beautiful yellow will fetch top dollar. A brown color will be almost worthless. Unfortunately, a diver cannot tell the color of roe until the urchin is opened. For this reason divers “crack open” a few urchins underwater to make sure they are harvesting good quality roe. An average red sea urchin weighs a little less than a pound. The preferred size is around 4 inches in width. To make money, the fishermen tries to harvest urchins that have at least a roe content of 10% of the total weight of the animal. In 2015, divers for sea urchins received around $0.60 a pound. The price to the consumer varies depending on color, condition and size but can fetch prices more than $100 a pound. Appearance is everything when prices are set for urchin roe and each segment must be uniform in size and color. 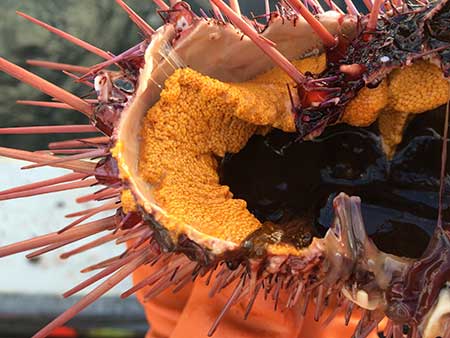 Inside a red sea urchin, showing the valuable skeins of roe, known as uni

Geoduck clams (Panopea generosa) are the world’s largest burrowing clam. Many North Americans have eaten clams so this oddity isn’t so odd after all. Who doesn’t love clam chowder? Geoducks live deep in the sand, up to 3 feet in depth, and use a large siphon to filter food out of the water column. Unfortunately, this behavior also makes them susceptible to Paralytic Shellfish Poisoning. But don’t worry as the state of Alaska tests for this and commercially harvested clams are safe to eat.

Getting top dollar for this clam depends on the animal getting shipped out of Alaska alive. A dead geoduck gets a fraction of the value of a live geoduck clam. In 2015, divers received around $4.50 a pound. A harvested geoduck averages around 2.5 pounds so it ends up being 10 to 15 dollars an animal. A good diver on a good bed can harvest two animals a minute or more. In recent years, divers got as much as $20.00 a pound during portions of the season.

Geoducks take a little more effort to collect. You can’t just swim along the bottom and pick up clams like you do cucumbers and urchins. A geoduck is dug out of the sand using a water pump to liquefy the sand. Once the sand is liquefied by the water jet, the diver than reaches into the sand and pulls out the clam. The harvested clams are then brought back to the dock and immediately boxed for shipment to market, often on the other side of the world. By the time these animals get to the consumer they may cost up to $100 each. They may be served as sushi in high end restaurants or put into an aquarium where patrons can point out the geoduck that they want.

A geoduck, known as a "gooey-duck."

The curious foodie can find sea urchins on Japanese and Korean menus as uni, it is served raw as sushi and sashimi. In Mediterranean cuisine, it’s known as ricci on Italian menus. Sea cucumber is popular in Korea as trepang, and is also called sea ginseng. In Japan it’s known as namako. In Chinese dishes it is usually sold as a dried product and then reconstituted for use in soups.

We will never know the true value of these shellfish since they have such a variation in pricing and travel to so many places around the globe. But there is no doubt that they are some of the most expensive seafood to consumers that is harvested in Alaska.

Scott Walker is the Area Management Biologist for the Division of Commercial Fisheries and is based in Ketchikan.