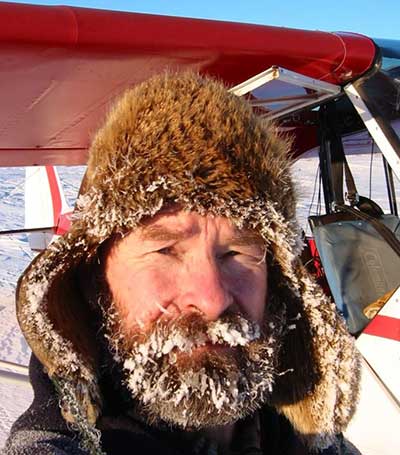 Jim Dau, a widely known and respected caribou biologist in Northwest Alaska, has decided to retire after 28 years of service with the Kotzebue Fish and Game office. His initial involvement with Game Management Unit (GMU) 23 began in the late 1970’s, working with the University of Alaska-Fairbanks Reindeer Program, Larry Davis of Nome, and Bob Dieterich (then State veterinarian), and the reindeer and reindeer herders of the Seward Peninsula. He learned to ride a snow machine by accompanying Larry Davis as they tended Larry’s large reindeer herd. Jim also spent several summers herding Davis’ reindeer, on foot, with only a small transistor radio tuned to KNOM for company.

In 1988 Jim began work with ADF&G in Kotzebue as the Assistant Area Biologist in GMU 23, and soon became acting area biologist. During this time he learned how to fly and became one of the most respected pilot/biologists in the state of Alaska. In 2007 he switched from area biologist to become the lead caribou biologist for Region V, continuing his work with the Western Arctic Caribou Herd, Alaska’s largest caribou herd. He has conducted research on caribou migration, calving, seasonal range use, and techniques for aging caribou through the use of caribou jaws.

“His steadfast determination to acquire information about caribou has led to one of the most coveted datasets on caribou in existence,” said former area biologist Charlotte Westing.

In addition to Jim’s research efforts he has provided information and education on wildlife diseases and parasites by creating a field pocket book that can be used by Alaska residents. He believes in engaging students in science. He started bringing students to Onion Portage to collar caribou to get them involved the science that used to understand the herd. He has also coordinated efforts to conduct monitoring and management for moose, musk ox, Dall sheep, brown bear, wolf and caribou. 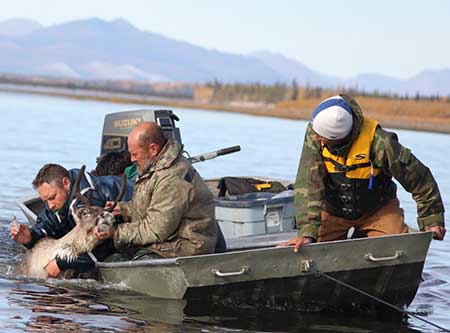 In Jim’s nearly 40 years of work with ADF&G and the University of Alaska he has created lasting bonds between ADF&G and the local 40 communities that are nestled in extent of the Western Arctic Caribou Herd. “Jim really values the input of the local people and sees the information they provide as being a valuable complement to the science he produces,” said Charlotte Westing.

Fish and Wildlife Service Outreach Coordinator Brittney Sweeny said, “Jim got to know local people, listened to and learned from elders, and shared his knowledge through (probably thousands of) meetings, radio announcements, and village visits.”

Long-time colleague Peter Bente describes Jim as “Extremely dependable and safe.” Jim was awarded the Governor’s Award Coworker Recognition 2011. His kind and humble demeanor along with his extensive knowledge regarding wildlife made him an invaluable asset to the people and the wildlife of the state.

Congratulations to Jim on his retirement; his contributions to and hard work for the people of the state and the wildlife will be long lasting and fondly remembered.