Landing a Lamprey
A Fickle Fishery Opens on the Yukon 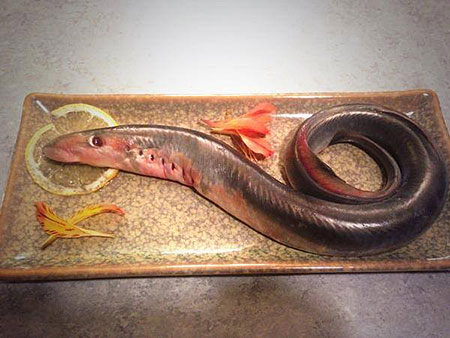 A lamprey has the place of honor as a table centerpiece. Lampreys have rich, fatty meat. Lampreys are a subsistence food to some Native Alaskans, prized by gourmets in some Asian and European cultures, and valuable as a high energy food for sled dogs. Photo by Sean Larson.

The annual run of lamprey is headed up the Yukon River.

But to catch one, you’ll need good, solid river ice, and perfect timing. For almost 15 years, Emmonak-based Kwik’pak Fisheries has tried to operate a commercial lamprey fishery on lower Yukon sometime around Thanksgiving. But General Manager Jack Schultheis said, more than other fisheries, this one is hit or miss.

“It’s not a run like salmon that goes on for days or weeks,” he said. “The lamprey run goes on for hours, and then that’s it.”

Lamprey swim upriver to spawn. But unlike salmon, lamprey bunch together in one big horde as they move upriver, and run under the cover of ice.

Fishermen at Mountain Village started the commercial lamprey harvest on November 17th, when a few thousand pounds of lamprey were taken. That harvest was curtailed by a lack of adequate river ice to give fishermen access to the main channel, according to Schultheis. 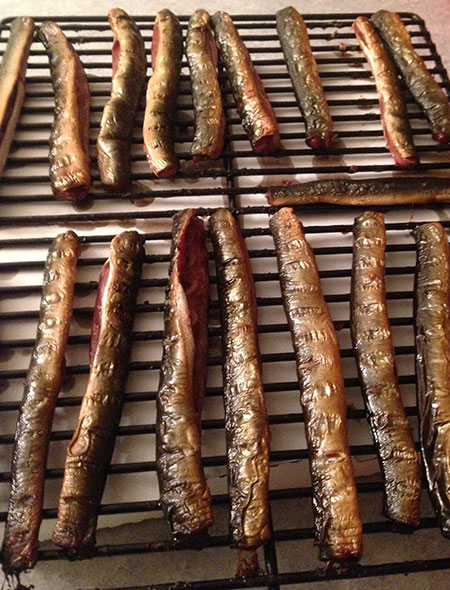 A subsistence harvest also took place at Russian Mission over Thanksgiving weekend. The lamprey run was described as “thick,” with each fishermen going home with three or four buckets of lamprey. The lamprey are expected to reach Holy Cross around December 1st, and Grayling by December 7th. Kwik'pak hopes to buy a larger amount of lamprey at Grayling for export.

The unpredictable nature of the lamprey harvest makes it hard to commercialize, according to Schultheis, because buyers want a steady supply year after year. Nevertheless, Yukon River lamprey gets shipped far and wide for a variety of purposes.

“Some of them go to Europe, some of them go to Asia, and some of them go into the bait market in the lower 48. And that all hinges on how much volume we get. When we get a lot of lamprey, then it is feasible to ship overseas – that’s in 20,000 pound increments. It’s gotta be a really good year to get that kind of volume.” 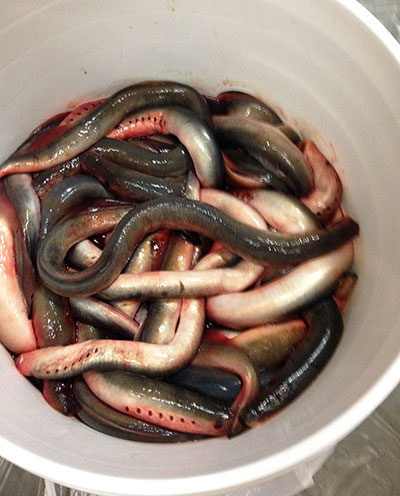 A bucket of lampreys. Photo by Sean Larson.

By those standards, 2014 was a very good year, with just over 40,000 pounds of lamprey sold commercially. The parasitic creatures are typically caught with long handled dip nets, or impaled on long poles fixed with spikes.

Lamprey also have a long history of subsistence use in certain villages, where they are commonly referred to as eels. Nearly half of their mass is fat, making them a good high-energy food for sled dogs. As human food, they are often smoked and jarred.

And their skins can be used to make bags or even parkas. The Field Museum in Chicago has a 19th century lamprey-skin parka from Anvik, containing about 200 lamprey skins sewn together in panels.

Tim Bodony is a journalist with KIYU, where this story was first broadcast. It is used with permission.