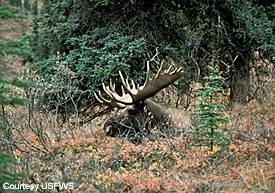 As hunters across the state venture out into Alaska’s forests and tundra in hopes of filling their freezer with moose meat, hunters in the Lower Kuskokwim have bit the bullet and hung up their rifles. They are entering the first year of a self-imposed five-year moose-hunting moratorium they hope will significantly improve their moose hunting in the future.

“The main stem of the Lower Kuskokwim is one of the few places left in Alaska that has outstanding moose habitat and extremely low numbers of moose,” said Roger Seavoy, the Bethel area biologist for the Alaska Department of Fish and Game.

Seavoy explains that moose are relative newcomers to the area. Biologists and locals have noticed that over the last 75 years or so Alaska’s moose have expanded their range westward into completely new territory on the Seward Peninsula, the Lower Yukon River, and Dillingham area drainages. Some older hunters can still recall their shock the first time a moose stepped out of the willows.

Moose are also trying to move down into the willow-rich lowlands of the Lower Kuskokwim but have encountered an obstacle – people hungry for moose meat. Eager hunters with jubilant families have been harvesting moose at a rate that keeps the moose from establishing a local breeding population. Year after year many are forced to spend a lot of time and gas money traveling upriver to reach more established moose populations, while their own villages are surrounded by excellent–but empty–moose habitat.

For five years representatives from the Lower Kuskokwim villages met with biologists from Fish and Game and the Yukon Delta National Wildlife Refuge to discuss how to increase their local moose population. Villages on the Lower Yukon had faced a similar situation, and in 1988 opted to try a five-year moose-hunting moratorium. Their success helped influence the decision of the Lower Kuskokwim Advisory Council. 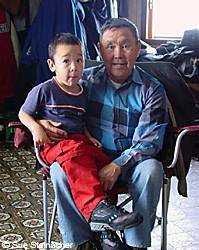 Robert Nick of Nunapitchuk with his grandson and future moose hunter, Kenyon Alexie.

Robert Nick of Nunapitchuk described the meetings. “We talked about a moratorium at many meetings. There was some controversy so it was discussed and tabled many times. Fish and Game and refuge folks kept communicating and providing information to the tribes. Last fall (2003) our Lower Kuskokwim Advisory Committee saw that almost all of the villages were in support of a moratorium, so they passed a resolution and brought it to the Alaska Board of Game. And now we have the moratorium.”

People know it won’t be easy. Thad Tikiun of Bethel expressed his concerns. “It’s hard to tell a person not to shoot. A lot don’t have full-time jobs, and I understand they need the meat – but they’re not starving. The moratorium is a good idea.”

James Charles, an Elder from Tuntutuliak looked past the hardship the moratorium will cause in the present to the future. “Supporting the moratorium is not only for me and my village – it’s for the whole region, for everybody. We older people may not go out hunting much anymore, but the moratorium is for our kids and their kids – the next generation.”

Jack Kinegak, a hunter from Tuluksak expresses his support for the moratorium. “The Lower Yukon is an example. They’ve already gone through the hunting closure and seen substantial results. They are living proof of what unity can bring us on the Lower Kuskokwim. If we all work together we can make our own moose population grow.”

And so the hunting rifles are set aside for now.