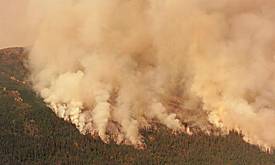 A recent fire that occurred in Unit 13 - same type of habitat that the Taylor Highway Complex fire is in.

Wildlife biologists are trying to determine the best way to assess the impact of this summer’s massive wildfires on critical winter range of the Nelchina caribou herd.

The Nelchina herd ranges through east-central Alaska and numbers about 38,000 animals, up from about 30,000 just a few years ago. The herd’s summer range is in the Glennallen area (game management unit 13) between Anchorage and Tok. In the winter, most of the herd moves northeast to an area near the Alaska-Yukon border along the Taylor Highway between Mount Fairplay and Tetlin Junction.

The animals do more than subsist through the winter. They actually fatten up, pawing through the snow to eat lichens. A study in the late 1990s showed that caribou returning in April from their winter range along the Taylor Highway weighed more than when they left their summer range in Unit 13 in October. When they stayed in Unit 13 all winter, they lost weight.

But this summer a series of fires known as the Taylor Highway Complex turned black spruce forests carpeted with energy-rich lichen into black sticks standing on bare black ground. Once the carpet of lichens has burned off, it takes 50-60 years for them to regenerate to the point where they are of value to caribou. 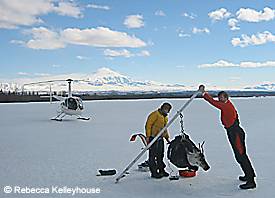 Wildlife biologists weighing a caribou in the spring.

Bruce Dale, an Alaska Department of Fish & Game biologist who studies Nelchina caribou, says it will be interesting to see how many caribou leave Unit 13, where they go and what they do when they get to the burned areas.

“This is a natural process,” Dale says of the fires. “They’re well adapted to this sort of thing.”

Still, researchers want to seize this opportunity to learn more about how caribou react to such changes. Dale has put together a study plan to try to document the effects. By collaring 40 calves and following them for three years, he can compare feeding activity with the recently completed five-year nutritional study. 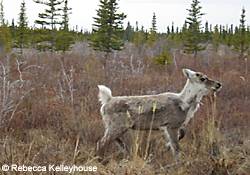 A four-month old caribou calf scurries off after being captured and weighed by wildlife biolgists.

The effects of widespread fire on caribou populations have long been debated within the scientific community. Most of the literature cites massive fires in the early 1900s as the primary factor in the disappearance of caribou on the Kenai Peninsula. But market hunting to feed hungry gold mining camps also is believed to have played a major role there. Caribou were reintroduced to the Kenai through a series of transplants from the Nelchina herd in the 1960s and again in the 1980s.

There are always winners and losers among wildlife species as the result of fires. While the Nelchina herd may suffer, Dale says the Forty-Mile herd may prosper. The Forty-Mile herd ranges near the Yukon River, north of the Nelchina herd, and the fires farther north burned through summer range used by the herd. Unlike lichens, summer forage preferred by caribou will quickly regenerate and flourish after a fire.

The species that stands to benefit most from the fires is moose, which thrive on the re-growth that follows fires.