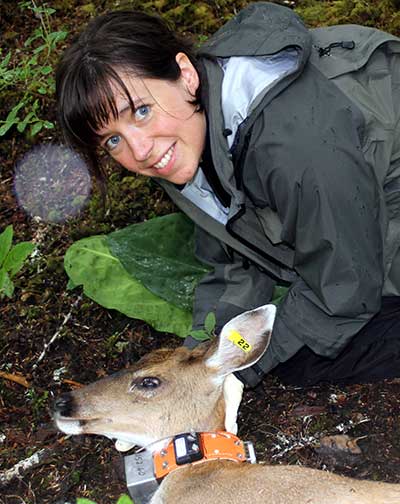 “We were guessing we lost 85 percent of the northeast Chichagof population, and we guessed we’d need five years to recover,” he said. “It’s been seven, but we’re here. We’re back in business.”

Mooney conducted an early morning goat survey in late July and flew about 25 miles of alpine ridges on central Baranof Island, from Blue Lake (near Sitka) to Annahootz Mountain. He counted 178 mountain goats, and even more deer.

Baranof is adjacent to Chichagof Island, and along with Admiralty are collectively known as the ABC islands. All three were hard hit by those lingering snowy winters, (especially Chichagof), and the deer Mooney saw on Baranof are a good sign for the region. He thinks the population is back at pre-crash levels.

Mooney has been studying deer right around Sitka, and over the past year or so he equipped nine deer with GPS/VHF collars. The GPS unit stores the animal’s location at regular intervals. Collars are programmed to fall off on a predetermined date, and the VHF transmitter allows a biologist to locate the collar. 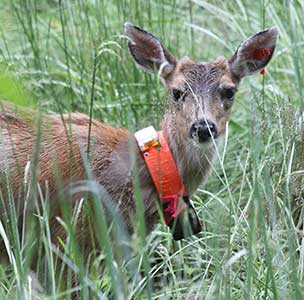 Mooney used deer calls to lure in the animals, then darted them with an immobilizing drug to capture, examine and collar them. He recently retrieved three collars, and has six “on the air” now. Four collars actually call in every two weeks and automatically download the data.

He also has up to nine trail cameras deployed to help monitor deer movements. He’s comparing deer right around the community of Sitka to deer about seven miles north of town at Starrigavin Valley (near the ferry terminal).

“We’re looking at some home range differences between what you’d call resident deer around Sitka, an urban area, and then out at Starrigavin,” he said. “That area was logged pretty heavily in the 1950s, and now it’s second growth. A bunch of thinning has been done; there is a trail through the area and a number of silviculture treatments applied. Between the collars and the cameras we’ll see if we can get a sense for what’s going on out there. And we’ll bring the students into it.”

For the past decade or so, Mooney has involved high school biology students in hands-on wildlife management practices. He’s had GPS/VHF collars on brown bears in the Sitka area, and he loaned the class a VHF radio receiver so they could go out in the field and find the bears’ general location in real time. After the collars were recovered, he shared the GPS data so students could use the coordinates to plot bear movements “It gave the kids some ownership of the bears,” Mooney said. “’This bear was right behind my house on this particular date.’ We thought we’d do the same thing for deer, let them see their movements across the habitat. For this deer project, education was the big thing for us, hands-on science and hands-on biology.

Mooney said former students have stopped by his office to tell him how cool it was to have those experiences when they were in high school.

“They go to college and they come back - and they’re the ones that’ll be on the city council debating garbage ordinances affecting bears in town.”

The trail cameras provide insights into the movements of the deer, and last year Mooney found that sometimes what they don’t show is telling.

“We had nine trail cameras out in Starrigavin Valley, and between July 14 and Sept. 14 we didn’t record any deer on any cameras. Not one. It shocked us,” Mooney said. “We were looking and calling, and didn’t have anything come in. We had bears come – and we got pictures of bears. Then after mid-September, we started seeing the deer coming down, does and fawns, and the bears and their cubs were moving up the hill and out of the valley. Fish runs were starting to dry up, the bears were headed up to their dens, and there’s still plenty of vegetation up there.”

Conventional wisdom holds that most Sitka black-tailed deer tend to have fairly small home ranges, and they spend their lives in their home range. Others move seasonally between a summer range in the alpine and sub-alpine, and a winter range closer to sea level. But there are exceptions. 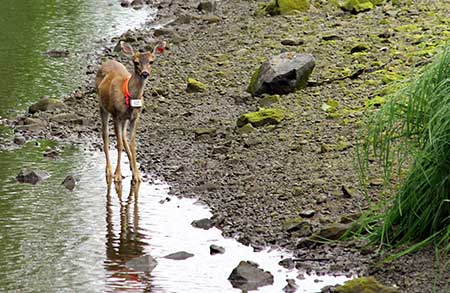 Mooney collared a young doe last year at Starrigavin Valley, but she didn’t stay there. She worked her way to town, about seven miles, and over the past year she has continued moving back and forth between town and Starrigavin, in a route paralleling the road, and around Harbor Mountain in between. It doesn’t seem that she’s established a typical home range.

Another deer, a Chichagof buck, moved 100 miles over the course of a fall and winter and spring in a big loop. “He took a walkabout and ended up in the spring where he’d been in the fall,” Mooney said. “He’s the only one that flat out took off like that.”

“That’s how you get your dispersal,” he added. “It’s not a lot of animals but some will take off and go. We have 13 documented moose (since about 1998) on north Chichagof that have swum over from Glacier Bay. One made it all the way to Slocum Arm, and ended up on Baranof Island on Clear Creek, in Kelp Bay. He couldn’t have picked a worse area for bears. No one ever saw him after he was seen in Kelp Bay. He was a nice looking bull, he traveled a long ways.”

Mooney said that none of the moose that have crossed Icy Strait have lived, as far as he knows.

“Chichagof doesn’t have enough good habitat, not a lot of willow, not to the extent you need to support moose. They get weakened after winter, and then in the spring bears get them. Or those big bad snow years.” 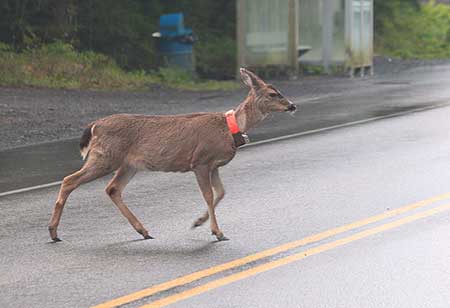 Mooney is curious to learn more about the movements of Sitka’s urban deer. What does their home range look like? How is it modified by having quality food sources? They have to contend with cars and dogs, but they benefit from abundant food resources – crabapple trees, ornamental bushes like rhododendrons and lilacs, bulbs and flowers, and birdfeeders and gardens.

“Some deer are right near the center of town, and they know what they’re doing,” Mooney said. “They learn to stay out of trouble, and they get dog smart in a hurry, they have to.”

Deer can be the bane of gardeners, and Mooney said many use a fence at least six feet high to exclude deer. They’re good jumpers, and they’ll also get down on their bellies and crawl under a fence. The Sitka Fish and Game office even loans out a device for gardeners to try, a motion and infra-red triggered alarm that flashes lights and plays sounds like a barking dog, whistles and horns. Mooney said it works well on both deer and bears because the sounds change each time and the animals don’t become accustomed to the same thing. It also serves to warn the homeowner that an animal is in the yard or garden.

“Deer are fun to watch and people love them, until they destroy your garden,” Mooney said.