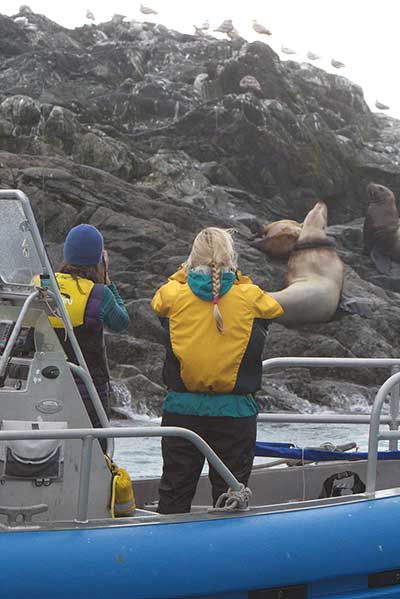 Steller sea lions are curious by nature. They will play with trash they encounter in the ocean, and a sea lion swimming through marine debris can become entangled. Loops of synthetic material are especially hazardous to marine animals.

Imagine a young sea lion playing with a plastic packing band floating in the ocean. The band slips over the animal’s head and lodges around its neck. Initially there isn’t a problem, but plastics are durable and outlive sea lions, so as the animal grows, the band becomes tighter around its neck, eventually cutting into the animal’s flesh. Lacerations, respiratory distress, and infection can follow, and eventually the animal may strangle or starve to death. The Alaska Department of Fish and Game’s (ADF&G) Steller Sea Lion Research Program has documented more than 300 sea lions with neck entanglements in Southeast Alaska during the past 15 years.

A team of scientists from ADF&G and NOAA Fisheries recently sighted a sub-adult male sea lion with a packing band around its neck at the Inian Islands, a sea lion haulout in Icy Strait southwest of Glacier Bay National Park in Southeast Alaska.

“In the past, there was nothing we could do to alleviate the suffering of such a large animal,” said veterinarian Kate Savage, of NOAA Fisheries Alaska Region Protected Resources. “Drugs used to immobilize terrestrial mammals are dangerous when applied to marine mammals. If the animal enters the water, they are at risk of drowning.”

“We’ve documented hundreds of sea lions that have plastic material partially or completely embedded in their neck,” said Lauri Jemison, a wildlife biologist with ADF&G. “We’ve tracked some of these animals over multiple years, and have watched the injuries get worse over time. The animals are clearly suffering from these deep, open wounds.” 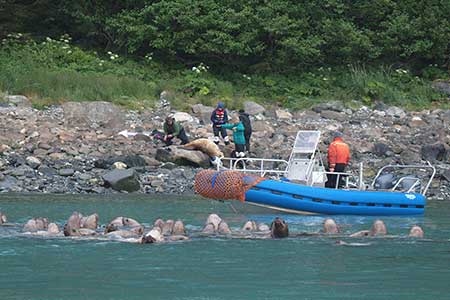 After removing a fishing lure (flasher) tight against the animal's mouth, the capture team applies tags and collects samples from a sub-adult male sea lion while Tom Gage monitors from skiff along with a group of curious animals. Photographer John Skinner

In 2010, after a team of scientists successfully used a new drug combination to chemically immobilize adult female Steller sea lions, Jemison and biologist Kim Raum-Suryan decided it would be worth developing the skills to attempt disentanglements of sea lions in Alaska. The logical and efficient approach was to piggy-back this work along with ADF&G’s annual Steller sea lion research trip in Southeast Alaska, where the scientists already had extensive experience working with sea lions. The first step, however, was to obtain necessary permits. Michael Rehberg, ADF&G’s Steller Sea Lion Research Program leader, worked with NOAA’s Marine Mammal Health and Stranding Response Program to pave the way for this work. Thanks to these efforts, and the financial support of World Animal Protection for 2015 disentanglement field work, State and Federal scientists are now using a new drug combination for helping animals such as the 1,400 pound, 7-year old male sea lion found at the Inian Islands. The new drug combination, pioneered by veterinarian Martin Haulena and others, allows the animal to maintain its breathing, even when the animal enters the water. This is the third year biologists from ADF&G and NOAA Fisheries Alaska Region collaborated to put the new technique to work disentangling Steller sea lions in Southeast Alaska.

“We can dart the animal with the newly devised cocktail, which includes a sedative as well as components to alleviate pain and stress, that subdues the animal quite quickly,” said Savage. “Once we have disentangled the animal, we can also reverse the effects so the animal is up and about very quickly.” 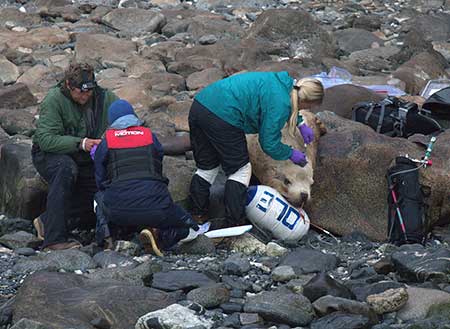 Kim Raum-Suryan glues a satellite tag to the head of a sea lion. Photographer John Skinner

July 7 was a lucky day for an entangled Steller sea lion. There were low clouds, gusty winds, and a steady blowing rain. The six team members were divided into pairs, two each in the skiffs, and two on shore. They spotted their target high on a beach, tucked against a rock with about a dozen other sea lions nearby. ADF&G’s Greg Snedgen and NOAA’s Kate Savage were dropped off on the north side of the beach where there were no animals, and skirted the back edge of the beach until they were in the woods behind the target animal. From there they were able to crawl around the boulders to within three yards of the entangled animal.

After carefully filling the dart with drugs and placing it in a Dan-Inject dart gun, Savage set the pressure and when the animal was perfectly in sight, slowly squeezed the trigger. The dart struck the sea lion in the right flank, a perfect shot. The animal alerted, looked around, moved a short distance down the beach, and then lay down again. Once he stopped, he rested his head against a rock and fell asleep. The capture team waited about 15 minutes before approaching the animal. While Savage began monitoring vital rates, Snedgen quickly cut free a thin plastic packing band that was embedded about two inches into the animal’s neck. Thickened scar tissue on each side of the plastic strap indicated it had been in place for quite some time. The sea lion was given a dose of antibiotic to help him heal from the infection.

The biologists took hair and skin samples, measurements, and glued a satellite tag to the animal’s upper back to track his movements. They also applied a small white plastic tag to each fore-flipper for long-term identification, and used hair dye to mark the number “762” on each side of the animal’s body to provide easy visual identification from a distance. The hair dye and the satellite tag will only last until the animal molts in the fall. 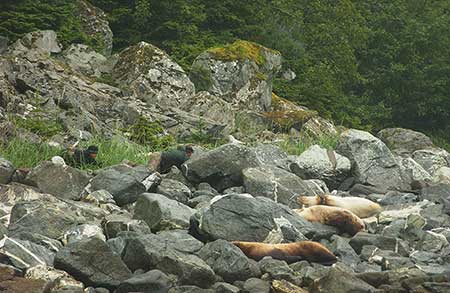 After Savage administered the reversal dose, it took about two minutes for the animal to begin moving his head. Soon he was up and swaying back and forth, then sluggishly moved towards the water, lying down and resting several times as he continued to the water’s edge. Within 10 minutes after waking, the animal entered the water. After one shallow dive, he appeared fully awake and alert, and swam away along the coast.

The State and Federal team has used the same method to successfully remove fishing flashers (lures) from the throat and mouths of three other Steller sea lions as well as removing another packing band from a fifth animal.

“Other marine mammal groups across the country are now interested in using this remote sedation technique to disentangle seals and sea lions,” Rehberg said. “We are providing those groups with expertise and insights from our experiences.” In addition to disentangling sea lions as opportunity allows, the ADF&G team is gaining important experience in handling chemically-immobilized sub-adult and adult sea lions, a technique that had been put on hold for ~15 years until the safe drug cocktail was developed.

Although marine mammal biologists are pleased with the new process, they say the best way to reduce marine mammal entanglements is to “Lose the Loop!” “We can all be a part of the solution by being responsible with our trash,” said Raum-Suryan. “The simple act of cutting any loop of synthetic material before discarding it in the trash could prevent neck entanglements if that trash ends up in the ocean.” Use of biodegradable products or those with less packaging can also reduce entangling marine debris. 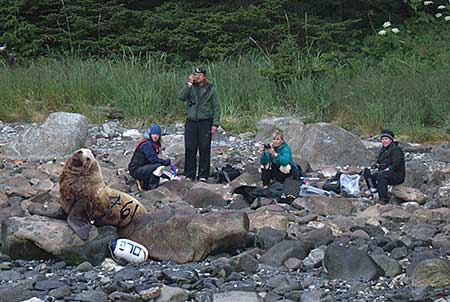 As for #762, biologists resighted the animal at the Graves Rock rookery (about 12 miles west of the Inian Islands) during both morning and afternoon surveys on July 9 and 10; he appeared to be doing well.

More than 200 marine species have been documented eating or becoming tangled in marine debris, including 26 species of marine mammals - and entanglement is a leading cause of death. ADF&G’s Steller Sea Lion Research Program began systematically documenting entanglements in 2000. Plastic packing bands or straps account for about half of all Steller sea lion entanglements in Southeast Alaska. Large rubber bands cause about a third of the entanglements and the rest are caught in nets, ropes, and monofilament lines.

Packing bands are commonly used to secure boxes of fishing bait. All too often they wind up in the ocean. To address the problem some commercial fishermen are going bandless, switching to bait that doesn’t come packaged in boxes with loops or bands. Others simply cut all loops. Cutting loops and disposing of them responsibly keeps potentially lethal marine debris out of the ocean.

NOAA Fisheries Alaska Region and the Alaska Department of Fish and Game are partners in the Lose the Loop initiative, along with other members of the Pinniped Entanglement Group. For more information on how you can help, visit: www.entangledsealions.adfg.alaska.gov