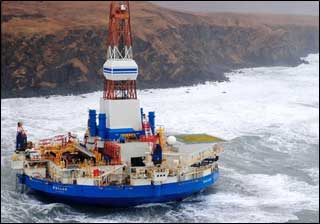 Kulluk grounding in 2012 on Sitkalidak Island. Biologists within the Division of Habitat have an active role in spill response training and oil spill drills to maintain preparedness in order to successfully represent ADF&G and protect the resources we manage.

It’s been more than 25 years since the Exxon Valdez Oil Spill in Prince William Sound. The following year, the Oil Pollution Act of 1990 (OPA 1990) was passed by the U.S. Congress. OPA 1990 contained provisions that strengthened the nation’s ability to prevent and respond to oil spills, such as

The Alaska Department of Environmental Conservation (ADEC) is the lead state agency for oil spill planning and response in Alaska. Several Alaska Department of Fish and Game (ADF&G) biologists work with ADEC to assist with oil spill planning and response efforts. ADF&G, U.S. Fish and Wildlife Service, and National Marine Fisheries Service are the three trustee agencies in Alaska with responsibilities to manage and protect wildlife. Agency representatives work closely together during a spill response or potential spill to identify and protect wildlife resources at risk. Biologists within the Division of Habitat have an active role in spill response training and oil spill drills to maintain preparedness in order to successfully represent ADF&G and protect the resources we manage.

Spill responses are one of many domestic incidents in the U.S. that are managed through the Incident Command System (ICS). This system allows for all components of a response (state, federal, and local agencies; other personnel; equipment; facilities; procedures; permitting; etc.) to be managed with a common organizational structure and operating period. This coordination increases the efficiency of a response and decreases duplication of efforts. The ICS is designed to be flexible and scalable to each incident. A response to the grounding of a fishing vessel with 50 barrels of diesel on board and an oil tanker with 500,000 barrels of crude oil on board will both be managed using the ICS; however, the roles and responsibilities within the ICS will be appropriately scaled for each incident. 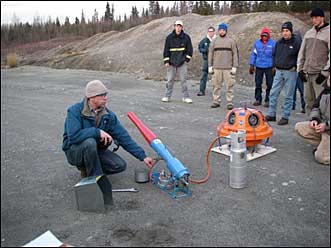 Training responders to use propane cannon and Breco buoy for bird hazing. Hazing is done to keep birds and other wildlife away from oil.

A major focus for the wildlife trustee agencies in the initial hours of a spill response is to identify environmentally-sensitive areas and wildlife that could be impacted. The information is organized on an ICS-232 Resources at Risk Form that helps prioritize response efforts. This form captures information such as which species are likely present, protected species, critical habitats, anadromous streams, high wildlife concentration areas, pinniped haulouts and rookeries, bird rookeries, shoreline type, etc. It is updated during a response as needed depending on changes in the weather, spill trajectory, or length of operating period.

We use a variety of sources to compile information about resources at risk: online databases, interactive mappers, GIS, subarea contingency plans, and communication with agency or area experts. There are a number of seasonal considerations identified on the ICS-232 form, such as migratory species, sensitive life stages, sea ice, and fisheries. Also, the type of shoreline that may be impacted can shape which sites are prioritized for protection based on how well the substrate can recover from oiling and what type of habitat it provides. For example, a sheltered tidal flat would be higher priority for protection because of its sensitivity and high value habitat, whereas exposed wave-cut platforms in bedrock would be lower priority because of constant flushing by waves and lower value habitat. Protection priorities may also be dictated by the effectiveness of tactics for potentially impacted areas because some areas cannot be well protected because of weather, equipment limitations, or logistics. High seas and fast currents limit the effectiveness of boom; boom deployed in locations with large tidal ranges are labor and equipment intensive to maintain; and the location of a spill may preclude some areas being protected because equipment and responders cannot reach the site in time. Responder safety is always the first priority during a spill, and unsafe work conditions may prevent the deployment of response equipment. 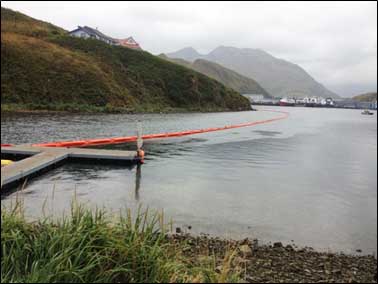 Boom deployment exercise in the Iliuliuk River. There are three general wildlife response strategies in the event of a spill. The primary response strategy is essentially to keep the oil away from the wildlife by controlling the source of the spill and the spread of oil.

The Wildlife Protection Guidelines are a part of the Alaska Federal and State Preparedness Plan for Response to Oil and Hazardous Substance Discharges and Releases (Unified Plan). They were established by a workgroup of federal and state agencies, federally-recognized tribes, and stakeholder groups, and are updated as needed. These guidelines provide essential information about wildlife and spill response for agency representatives in the ICS and responders in the field.

In the event of a spill or potential spill, habitat biologists are positioned in the ICS and act as a liaison between ICS and ADF&G area biologists in all divisions to incorporate their knowledge into the response. Many response activities require a permit from ADF&G, such as boom deployment in an anadromous stream or active hazing of birds or terrestrial mammals. Because permitting and identifying resources at risk are coordinated through the ICS, it is essential that ADF&G be represented by staff experienced with this system. Also, to ensure wildlife and resources are protected if a spill occurs, it is equally essential for the entire department to be involved. For example, although permitting authority to haze birds and terrestrial mammals falls under the purview of the Division of Wildlife Conservation, the commissioner of ADF&G delegates this authority to the Division of Habitat for oil spill response activities. Yet, wildlife biologists are the species and area experts, so their input and expertise is invaluable. Involvement from the Divisions of Commercial Fisheries, Sport Fish, and Subsistence are also vital during a spill response to help identify the resources at risk, such as open fisheries, spawning locations in a stream, and high use subsistence areas.

Outside of the spill response arena, the department also plays a significant role in oil spill contingency planning and preparedness. Alaska is divided into 10 subareas for contingency planning, and each plan is updated about every five years. Plan updates are a multi-agency and stakeholder effort, and ADF&G input is coordinated through the Division of Habitat. These plans are only as good as the information they contain, so the collective knowledge from all divisions is essential to help responders (hint, hint: biologists in the Cook Inlet Subarea will be contacted soon for plan updates). 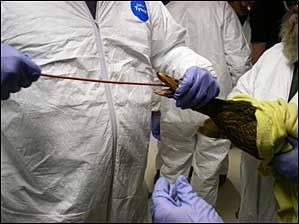 There are three general wildlife response strategies in the event of a spill. The primary response strategy is essentially to keep the oil away from the wildlife. This is done by controlling the source of the spill and the spread of oil through tactics such as mechanical recovery, boom deployment, removing oiled carcasses to prevent secondary contamination, in situ burning, and use of chemical dispersants. The secondary response strategy is to keep the wildlife away from the oil by deterring or hazing them from the spill area, or by pre-emptive capture of wildlife that have a high likelihood of becoming oiled. Hazing can be passive or active, and is only applicable for certain species, most often birds, brown and black bears, and other furbearers. An example of passive hazing for birds is mylar tape or scarecrows, whereas active hazing includes noise-generating devices such as propane cannons or Breco buoys. The tertiary response strategy involves the capture, transport, rehabilitation, and release of oiled wildlife. This is a last resort because of the stress for wildlife, the uncertainty of success, and the likelihood that some rehabilitated animals cannot be released back into the wild.

ADF&G involvement in spill response and contingency planning is essential to help protect the species we are responsible for managing. Our relationship with other state and federal agencies, industry, tribes, and local stakeholders is fostered through our active participation in oil spill drills, trainings, and contingency planning.

Jeanette Alas is a Habitat Biologist based in the Anchorage office. Her work time is split between Title 16 permitting duties and oil spill contingency planning and response efforts.