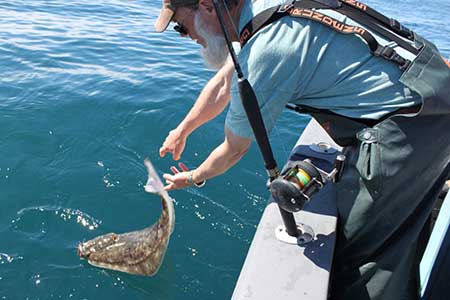 Captain Pete Wedin of Captain Pete’s Alaska in Homer, AK gently releasing a halibut back into the water

But anglers released about 40-45 percent of all halibut they caught. Many anglers release halibut that are either smaller than preferred, or too small or too large to keep under existing limits. Or they may continue to catch and release halibut after they’ve taken their bag limit. Some people release the biggest fish, which are mostly highly productive females, in the belief that doing so contributes to resource conservation.

The halibut is a hardy fish. Lacking a swim bladder, it doesn’t suffer barotrauma—the protrusion of eyes and internal organs—that can kill rockfish and cod when brought up from the deep. Most halibut landed by anglers and subsequently released survive to grow and fight another day. But a few do not, victims of gut- or gill hooking, or of rough handling. Starting in 2014, the allocation to charter halibut anglers includes the estimated release mortality, which adds another 2-3 percent to the overall harvest by weight.

In 2013 two fishing charter operators contacted the Alaska Marine Conservation Council and proposed drafting a set of voluntary best practices for release of sport-caught halibut, and circulating the information to charter boat crews, their clients, and non-guided anglers. They believed that improved practices would result in better halibut conservation and would increase recognition of stewardship in their industry 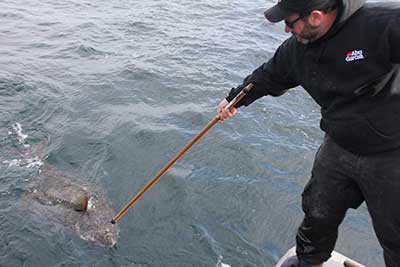 First we recruited six charter captains to volunteer on a steering committee. They were joined by staff from Alaska Dept. of Fish and Game and the International Pacific Halibut Commission. During committee meetings the captains proposed practices that they knew were practical, effective for minimizing release mortality, and would impose minimal burden on the vessels and crews. We circulated the drafts for review and took them to meetings in various ports for broader industry input.

The underlying principle of Every Halibut Counts is simple: treat each fish to be released gently and respectfully to maximize its chances of survival. The specifics are equally simple:

Here are a few more tips:

Circle hooks are easy to remove and cause less damage to halibut than J hooks or treble hooks. Barbless circle hooks hold halibut almost as well as those with barbs, and are even less damaging to remove. 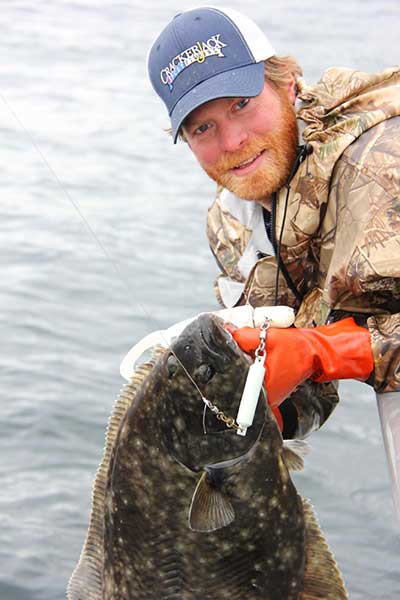 About half of all sport caught halibut in Alaska are released.

Reel in fish quickly to minimize exhaustion. If you anticipate bringing fish on board that you intend to release, designate a place on deck for handling that has no pointed or sharp edges, and place fish on a mat or padding for handling

If a fish is bleeding, gut hooked or visibly injured it probably won’t survive. Keep it and count it against your bag limit if it doesn’t violate size or bag limits.

Avoid the “chicken patch” and if you find you’re catching a lot of fish smaller than what you want to keep, move on. The fewer halibut caught and released, the fewer that die of hooking and handling injuries.

Keep a count of the number of halibut you release each day and enter numbers in your fishing journal.

Be a role model. Encourage others to catch only what they want to keep, and treat every fish with respect.

Terry Johnson is a professor of fisheries and a marine advisory agent with the Alaska Sea Grant Marine Advisory Program, based in Anchorage.