Hydropower in Alaska and Fish and Game 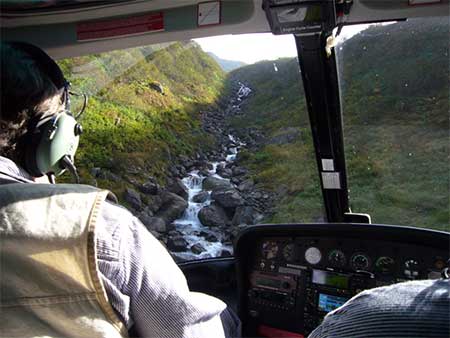 Helicopter reconnaissance in the canyon of Upper Allison Creek, near Valdez. Yes we are flying! Photo: M.D. Miller 9-24, 2010.

It was a typical type of spring day in Southeast Alaska, overcast with a hint of rain, but with the promise of a busy summer ahead. It was early May and I was in Elfin Cove to tour a potential hydroelectric development near town. This small project is being investigated under a Federal Energy Regulatory Commission (FERC) Preliminary Permit as a possible alternative power source. Like many Alaskan communities, Elfin Cove currently depends on a diesel electric generation plant for electricity production.

Why are communities like Elfin Cove investigating alternative energy sources? Usually it is based on energy cost, energy dependability and diversity, the potential for community diversity through new and developing business ventures, and in some cases community safety. Costs to produce electricity are high due to the remoteness of this community, the seasonal load fluctuations from summer increases in population due to several fishing lodges, and the cost of diesel fuel. And not just the price per gallon - in many Alaska towns and villages, the purchase, shipping, and storage of diesel fuel is problematic. Many communities depend on seasonal barge or tanker schedules to get diesel shipped to their destination. There is no ability to “shop” for the best price to reduce costs to the consumers. The potential environmental dangers of shipment and storage of large quantities of fuels must also be recognized. 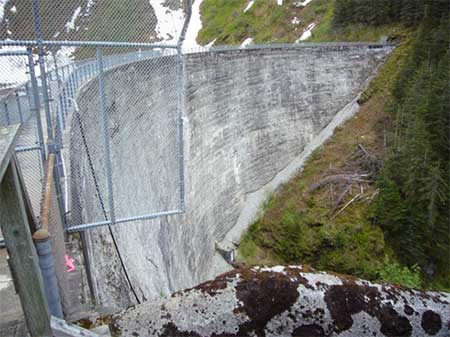 Salmon Creek Dam, near Juneau. Built in 1915-1917. In many parts of Alaska that there are opportunities for hydroelectric development that have a minimal effect on salmon. Many developments use watersheds above a salmon passage barrier to produce electricity. Those projects take water from a lake or stream above the barrier and return it to the stream at a point where there will be little or no effect on salmon. Photo: M.D. Miller 6-5-2012

The Elfin Cove proposed project is one of many hydropower and hydrokinetic projects being investigated in Alaska. We are lucky in many parts of Alaska that there are opportunities for hydroelectric development that have a minimal effect on anadromous resources (salmon). Many developments utilize watersheds above a salmon passage barrier to produce electricity. Those projects take water from a lake or stream above the barrier and return it to the stream at a point where there will be little or no effect on salmon.

Projects licensed by FERC and currently under construction include Allison Creek near Valdez, Gartina Creek near Hoonah, and Upper Reynolds Creek on Prince of Wales Island. An increase of project capacity was recently completed at the Blue Lake Dam near Sitka. This project included a rebuilt powerhouse with increased capacity made possible by increasing the height of the existing dam.

Currently there are thirty FERC licensed Hydropower Projects and one FERC Licensed Hydrokinetic Project in Alaska. Three existing FERC projects are seeking license amendments to increase water storage capacity to help with energy load distribution in times of high energy demand. Another four proposed projects have filed for FERC licenses, and sixteen other proposed FERC regulated projects are being investigated. There are also several existing and proposed hydropower development projects which do not require FERC licensing. 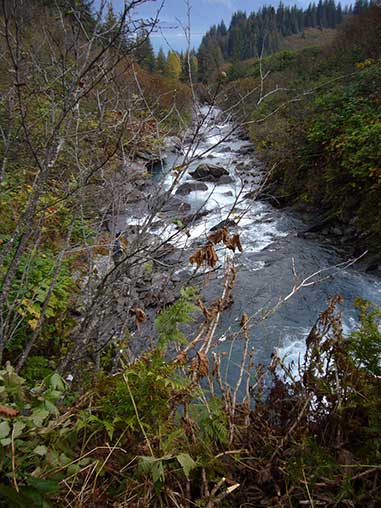 Allison Creek. View is looking downstream below the canyon area. Lots of alder and devils club! Valdez is seen in the background. Photo: M.D. Miller 9-24, 2010

Within our department, investigation and monitoring of FERC Hydropower Projects is assigned to the Statewide Aquatic Resources Unit (SARCU) within the Division of Sport Fish, Research and Technical Services Section. Non-FERC projects are investigated and monitored by the Division of Habitat. Part of what we do on FERC projects is to seek and coordinate ADF&G input from all divisions on potential project effects, resource identification and periodicity (when a fish is likely to be found in the area), potential studies necessary for ADF&G to determine streamflow needs for the fish, and various filings with FERC designed to adequately protect resources.

Sometimes we must seek to balance resource needs and community needs. The Fish and Game Act requires Alaska Department of Fish and Game to “…manage, protect, maintain, improve, and extend the fish, game, and aquatic plant resources of the state in the interest of the economy, and general well-being of the state” (AS16.05.020). We assist developers and their consultants to coordinate activities, provide resource information and contacts with divisional area management biologists, review proposals, develop studies, review results, and then make recommendations to FERC on conditions designed to be included in the license. Conditions may include required instream flow releases, streamgage requirements, a bear safety plan to protect humans and bears, plans for hazardous substance uses (fuels), and post construction biotic monitoring to evaluate potential effects of a project. 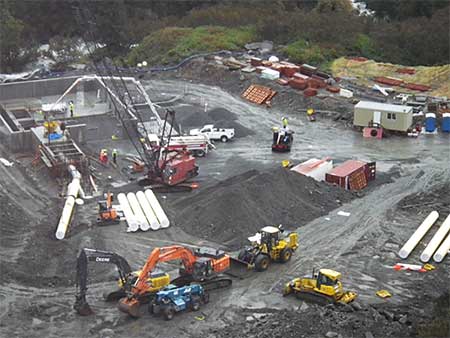 For communities like Elfin Cove, energy costs rise with each fuel delivery. Once a project is evaluated for energy potential, and to determine if costs will pencil out to benefit the ratepayers, the question of how and where to fund a project must be answered. In Elfin Cove, the community electric utility is developing plans and evaluating the projects potential. They are working with agencies to determine the viability of pursuing the project further. This community may be unique in that there is also an identified high energy tidal hydrokinetic site identified near the community. This site has the interest of consultants representing equipment developers desiring to test their inventions in real environments. The utility must determine what is best to pursue, both financially and in dependability.

Monte D. Miller is the ADF&G FERC Hydropower Coordinator, based in Anchorage. Born and raised in the territory of Alaska, Mr. Miller started with ADF&G in 1971 as a Fish and Game technician working for what was then the Game Division. He was an original employee with FRED, building and working at the Starrigavan Saltwater Rearing Facility at Sitka in 1972. Work for the department included fish culturist at the Fire Lake and Fort Richardson Hatcheries, then assigned to a new large production hatchery in Cold Bay. Work then took him to the Columbia River where he worked in tribal government for 13 years studying hydropower effects and developing fisheries enhancement projects. He has occupied his current position since September 2010.