State to Open Round Island with Help
from Donors, Federal Grant 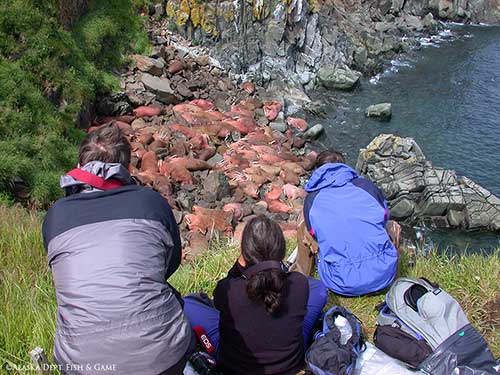 Visitors to Round Island at an overlook.

Round Island, the widely photographed centerpiece of Alaska’s Walrus Islands State Game Sanctuary, will be in full operation this summer and open to visitors thanks to donations from a group of private partners dedicated to the study and conservation of walrus, and a federal grant.

Funding for the Round Island program was eliminated last year after declining oil revenue resulted in state budget cuts. In the wake of public concern that the Round Island program continue, donations were received from the Annenberg Foundation, Alaska SeaLife Center, Point Defiance Zoo & Aquarium of Tacoma, Georgia Aquarium in Atlanta, Milwaukee-based Oceans of Fun, Pittsburgh Zoo & PPG Aquarium, and the Pacific Walrus Conservation Fund, along with an existing federal grant from the Coastal Impact Assistance Program to study Steller sea lions.

"We're honored to help the selfless works of the people at the Alaska Department of Fish and Game that are dedicating their lives to benefit us all,” said Charles Annenberg Weingarten, vice president of the Annenberg Foundation and founder of explore.org, a philanthropic media division created to champion the selfless and inspire lifelong learning. “Our missions have always been aligned in that we seek to educate and inspire the world while safeguarding the true pearls of the planet." Walrus haul out at round Island.

Tara Riemer, president and chief executive officer of the Alaska SeaLife Center in Seward, echoed Weingarten’s sentiments. “The Alaska SeaLife Center values the scientific, conservation and educational opportunities at Round Island,” said Riemer. “We are excited to bring together funding partners from the zoo and aquarium community who are passionate about walrus conservation to help sustain this unique program.”

Round Island’s operations typically include a camp staffed through the summer by department personnel who work to protect and monitor walruses and other wildlife, and oversee a visitor use program and campground. Annual costs range around $105,000.

“We are grateful that these private entities stepped forward to help manage and protect a unique species like walruses,” said Joe Meehan, statewide program coordinator for the Alaska Department of Fish and Game. “Their generous contributions will see us through this season and perhaps the 2016 season. However, given Alaska’s budget situation, the future of the program depends on finding continued outside funding sources.” 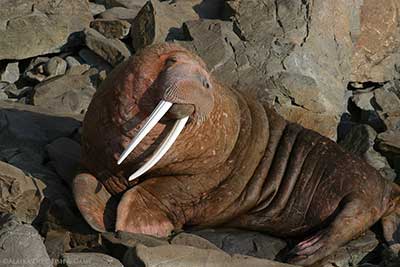 April 13 marks the 55th anniversary of the sanctuary’s creation by the Alaska State Legislature, which occurred shortly after statehood in 1960. Round Island and the Walrus Islands sanctuary protect North America’s largest continually used terrestrial haulout for Pacific walruses. In addition, the sanctuary provides nesting habitat for upwards of a million seabirds, a Steller sea lion haulout and a host of other marine and terrestrial wildlife.

Round Island access permits for camping or day visits are now available through the Alaska Department of Fish and Game for those seeking a unique wildlife viewing experience. The island is open to visitors from May 1 through August 15.

More information on the sanctuary and visiting is available.

Ken Marsh is an outdoor writer and photographer, and an information officer for Fish and Game based in Anchorage.