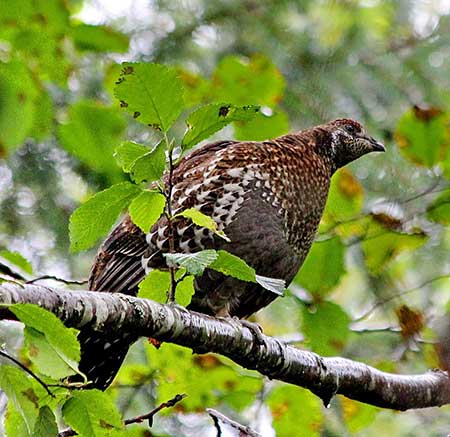 A sooty grouse or hooter. Photo by Phil Mooney.

The chicken-sized grouse of Southeast Alaska that inhabit the Tongass National Forest are called “sooty grouse” and used to be called “blue grouse” by nerds like wildlife biologists who pay attention to what someone in an ivory tower considers the bird’s “proper common name.” These birds are known by locals in Southeast Alaska by one name, and one name only: hooters.

From late March through June, the males of these biggest of Alaska grouse fly to the evergreen tree tops and hoot, calling females far and wide. I’m an avid deer hunter, but not exactly a poster child for In Shape magazine. During deer season, I don’t pass up a spike on the beach in hopes of a three point 2,000 feet up in the alpine.

Hooters don’t give hunters that choice. You have to climb the mountainside to get to them. There are rarely hooters near the beach. This 2015 spring year has been a banner year for hunting hooters around Juneau. Last April, I hunted a ridge that had groups of evergreen forest growing up the mountainside like fingers with snow chutes of alder, devils club and salmon berries in between. I used cross country skis and snow shoes to get to the base of one of the fingers, then climbed through the spruce and hemlock trees to harvest a single bird on the mountainside. The next bird was hooting in a finger of trees across a quarter-mile snow chute full of snow. Not something I felt comfortable crossing in snow shoes. So I was satisfied with the one bird and the six hour round trip trek.

This year, we had hardly any snow. I went to the same location, and was able to get back to the same area with just my Xtra-Tuff boots. Side hilling between the fingers of trees was on snow-free ground this year, with just the devils club and salmon berry thorns to negotiate. I got to other fingers of trees on a four bird day. When I got the last bird, I was way up the hillside. I could see my truck parked along the road. Mentally, it would have been a shorter walk if I could not see so far. It was going to be a long trek back. My 51-year-old knees supporting some excess baggage do not enjoy going downhill the way they used to. When I got to the truck, I swore off hooter hunting. When I got home, I grabbed a bucket to sit on and a pail for the feathers and dressed the four birds. A couple ibuprofen and a few pulls from the medicine bottle in the snake bite kit and I was already planning the next day of hooter hunting. It’s all I can think about.

On a day off work, it’s sunny and I know my house needs attention. Sections of siding show signs of rot. Is it just surface rot, or will it be all the way through to the studs? I tear off the siding. To my amazement, the rot is limited to the siding, plywood sheeting and just a bit here and there on the studs. And a little rot on floor joist. I chip away the rot. It’s not yet noon. It’s a sunny day. My mind tells me that the exposed wood and insulation should dry out in the sun. I grab my pack and head to the mountain after more hooters.

My gun of choice on Douglas Island is a .22 rifle over 20 gauge single shot with open sights. On Admiralty, I carry a side by side 12 gauge shotgun because the brown bears are emerging from their dens about the same time the hooting starts. Both guns break apart into the stock, barrel and forestock in seconds and can be put in my backpack so I have both hands free to claw up the mountain. I use 6 shot in the 20 gauge because someone gave me a lifetime supply of them. In the 12 gauge, I use low brass skeet loads. Both seem to do the job. I might use the .22 if the bird is on the edge of shotgun range high up in the tree. But most of the time, you can climb up the hill behind the tree the bird is in and get almost eye-level with it. I use the shot gun most of the time. In fact, I only used the .22 once because I inadvertently moved the selector from shotgun to rifle. Climbing for an hour or two and missing or wounding the bird with the .22 is not my kind of fun. The shotgun does the trick. 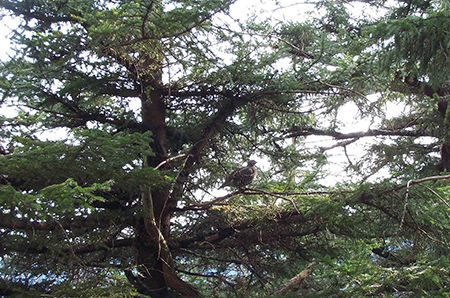 A typical view of a hooter in a tree. Photo by Neil Barten.

Hooters are not birds you are going to flush or spook by your presence. You can don’t have to slink through the woods. Just try to identify the direction of the hoot and go. You follow the hooting until you get to the tree the bird is in. Or at least the tree you think he’s in. Hooters can seem like they are right there, 20 yards in front of you, hooting away, yet you can’t see them. The next time they hoot, they can seem like they are in a different tree. When you finally see the bird, you can enjoy the show before you shoot. They are not going anywhere. The male birds hoot with enthusiasm. It’s spring. It’s sunny. It’s time to court. They don’t care you are down there.

More than once I’ve flushed a hen on the ground, looking for a dance with the man in the tree. They never fly far – you can usually see them land in a nearby tree. The rare times you can get two birds in one location are even better.

The hooting is what creates the addiction. Unlike deer hunting, where you know the deer might be up the ridge in the alpine but could just as easily be in some lower level muskeg, the hooter tells you exactly where he’s at. If you climb up the mountain to his tree, he’ll be there waiting for you.

Many times a stalk starts with a bird hooting at what seems like a quarter mile away. When you cover that quarter mile, you find that the bird is still a quarter a mile away…and maybe straight up a cliff. Can I even get up there? If I get up there, can I get down? These are the questions I often ask myself, but usually not until I’m half way up some hillside and it’s too late. Sometimes you make the climb, and see the bird and have an easy shot. You know that won’t be the tough part. The tough part will be if you are in such a steep spot that retrieval of the downed bird is questionable. That’s when you look at the likely landing spot and gauge if you can get there from here. Sometimes you can. Sometimes you can’t. But you shoot and get there anyway. I’ve yet to lose a bird in this way, but it’s been close.

Yesterday was a good example of the hooter affliction in the prime of the season. I came to work an hour early so I could take two hours off at lunch to stalk a bird I heard hooting above the launch ramp as I pulled my boat out from checking a crab pot. He was not far from the road yesterday. Today, the wind was up a bit, and when I got out of the truck, I could hear hooting, but more faintly than yesterday. I shouldered my pack and headed up the hill. I soon realized that yesterday’s hooter might not be here, but I kept climbing, hoping it was just the wind and if I just closer I’d hear him. I got up the hill and no bird. He was taking the day off. I returned to my truck with a good lunchtime of exercise in. 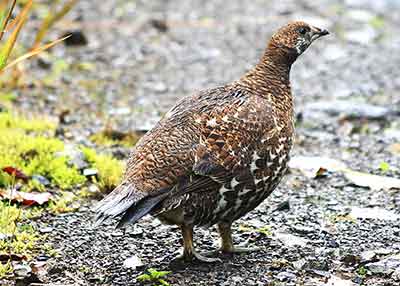 The largest of Alaska's grouse, the sooty grouse can range in color from brown to a bluish-grey. Photo by Phil Mooney.

When I got home later in the day, I grabbed a plastic bag and went into the woods behind my house to look for fiddleheads, which I’d seen in other places hooter hunting. Pretty slim pickings here, though, as it looked a little early yet. Then I heard it. Faintly, but it was there. Hoot hoot hoot. There was a hooter up my hill. I had a good idea it would be in the same spot as the birds were the past two years. The first year, the bird flushed as I approached the tree (and that’s the only time that’s ever happened). The next year, I’d found the bird and was enjoying his hooting before I would harvest him when a raptor came in to view and tried to snatch the hooter. The hooter flushed just in time and flew off. This year I would not wait.

I went back to the house and grabbed my pack and started up the hill. The bird was indeed in the same spot. In a group of trees along a cliff face. I went to the base of the cliff and hoped the bird would be in one of the trees that were clinging to the side of the cliff. It was not. It was clearly in the trees on top of the cliff. I knew I could go back down the hill a ways, then side-hill it to a spot that was not as steep, and eventually get up to where the bird was. When the bird dropped, though, it would come to about the spot I was standing at the base of the cliff. The plan was all good, except I knew there was not enough daylight. This patch of woods is one big group of deadfalls after another and not a place I want to go out of with a headlamp. For the second time that day, I returned empty handed. A month into hooter season, though, the joints don’t hurt so much. My baggage is little less excess. As the May 15 season closing date inches closer, the monkey on my back holds on a little tighter, so I check the sunrise table to see if I can possibly get up and back before work tomorrow. I leave the house at first light, being careful to sidestep the pile of rotted siding. I notice the exposed studs and insulation are drying nicely...

Hooters are big birds, so take the time to keep all the meat – breast, wings, legs, neck and back. Cut the meat off the breast, legs and wings. Cut into strips, and marinate in some sort of Italian salad dressing for an hour. Keep the carcass and neck.

Saute a large chopped sweet onion and a can of mushrooms until the onion is soft and the water steamed out of the mushrooms. Set aside.

Drain the marinade from the strips and save marinade. Quickly brown each side of the hooter strips, then add back in the marinade, onions and mushrooms and toss together.

Serve over a green salad.

Take the carcass and neck and roast. Then cut through the legs and wings with scissors to expose the marrow. Put in a pot, cover with water, and simmer on the stove for a couple hours. Strain the stock, then pick the meat off the back and the neck and put into the stock. Save as a stock for soup or anywhere chicken stock is called for.

Mark Stopha is a fishery biologist for ADF&G and lives in Juneau.