Aerial Surveying for Salmon in Alaska 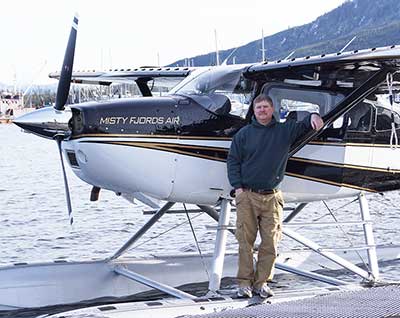 The author, Scott Walker, prepares for a aerial stream survey. Hundreds of streams are surveyed by air to help manage salmon.

One of the largest fisheries in Southeast Alaska is the purse seine and gillnet fisheries for pink salmon. The key component to managing these fisheries is aerial surveys that count boats and salmon (primarily pink salmon) from a small fixed wing airplane. This “inseason” management insures that commercial fishermen safely harvest salmon in areas where many stocks of salmon are intermingled. Surveys are critical to ensure that fish return to their natal streams in sufficient numbers to reach escapements. We use the term escapement to describe the salmon that escape through the commercial fisheries and natural predation to make it to their natal streams, ensuring future generations of salmon.

The traditional survey plane is a small fixed wing plane called a super cub or piper cub that has a pilot in front and one biologist in the back. The biologist can look out both sides of the plane as it twists and turns up a narrow river valley counting salmon. Due to diminished need of these planes in some areas of Alaska, surveys are also conducted in larger planes like the Ketchikan management biologist’s Cessna 185, which has two seats in front and two in back. Even with the additional seats, the need for a light plane while doing stream survey acrobatics requires the one pilot, one passenger rule. In Ketchikan, the biologist conducts stream surveys in the seat behind the pilot so that both pilot and biologist are looking out of the same side of the plane.

There are 12 primary ADF&G aerial surveyors in Southeast Alaska that manage the net fisheries. Of these, five AMB’s (Area Management Biologists) do the majority of the surveys. The AMB is the one to make the always-hated fishery closures and tends to get nervous with second-hand information during the peak of the season. 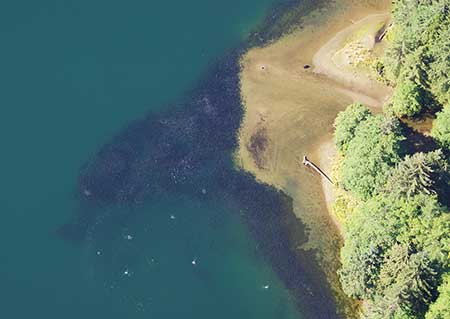 Pink salmon congregate at the mouth of the Klakas Inlet head stream in mid August due to low water conditions due to the lack of rain. The dark spot near the top center right is a bear at the waterline watching the school.

There are more than 3,000 streams in Southeast Alaska, and a fraction of these have been identified as “index streams” for surveys. They are singled out because they are better suited for surveys – the water is not too dark, the tree canopy cover is not too dense, they are accessible and representative of the areas that are managed. Some were identified in different areas decades ago and have a valuable track record.

There are 714 pink salmon index streams in Southeast Alaska. On average, each of these index streams is surveyed at least three times. Many index streams will be surveyed each week during the peak of the salmon return until it is determined that the escapement has been met. Other streams that are important to management are also surveyed including chum, coho and sockeye systems.

In 2014, 778 different pink salmon streams were surveyed by fishery biologists managing the net fisheries in Southeast Alaska. They counted around 15 million pink salmon with an average stream count of 18,000. The largest count by any surveyor was 480,000 pink salmon in the Wilson River south of Ketchikan. The lowest (excluding zeros) was 10 fish observed in Nip and Tuck Stream located near Juneau. Nine of the top ten streams surveyed in 2014 were in the Ketchikan management area which had a strong return in 2014. There were 29 streams with more than 100,000 pink salmon counted. 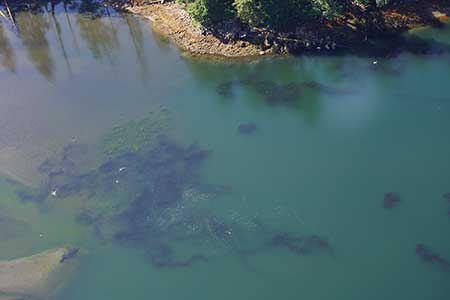 Pink salmon congregate at the mouth of the Hetta Portage stream one of the large pink salmon streams on Prince of Wales Island.

How do you count 480,000 salmon? You start out by flying with another biologist or with a seasoned pilot - like how I started. You learn to recognize groups of fish – tens, hundreds, and thousands in all the streams that you look at. Then you walk the same stream on some that are accessible. We also get together and all fly the same streams and compare counts. It is a long process and everybody does it a bit different. The real key is to know whether there is enough fish in the system or not enough. Sometimes we fly over an area, count the fish in the intertidal and then land and watch them for awhile and see how many layers of fish there are. Over time you get a feel for what you are counting.

Boat counts are also a critical part of fishery management and provide fishing effort. Counting boats requires no aerial acrobatics and consists of three to four hours flying areas open to commercial fishing. Boat counts can be monotonous, flying from one open area to another or flying an open area where no one is fishing. It is always exciting to watch a seine boat pull in a purse seine net and watch the deck fill with shiny fish. Once the number of boats is counted, managers multiply the number of boats times the average catch per boat from harvest reports and estimate how many total fish are caught in an commercial fisheries opening. 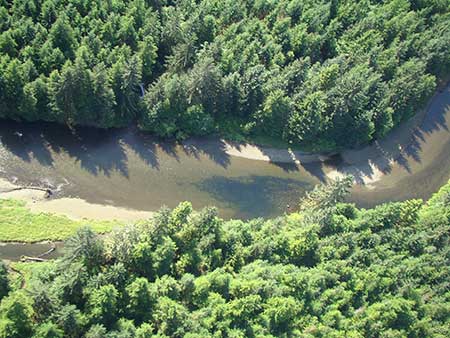 Pink salmon hold in a pool in the Harris River, one of Prince of Wales larger pink salmon systems.

One thing every salmon surveyor knows intimately is the sick sack. For me it was just once, until I figured out my acrobatic limitations and realized that keeping cool (keeping the air vents open) was essential to handling the weaving, dipping, and turning that is required to effectively count salmon from the air.

Beginning mid-June, Ketchikan biologists began surveying early run pink salmon systems and conducting purse seine vessel counts. These early systems that we survey are primarily mainland rivers that are some of the biggest in both numbers of fish and size. These initial surveys give us an idea how the season will progress. Each survey starts from our pilots dock at Misty Fjords Air and Outfitting. Once we get near our destination stream we begin with a circle around the intertidal to count salmon waiting to move into the river. Once we have an intertidal count, we fly up (or down the stream depending on lighting conditions) weaving back and forth to estimate fish in all of the rivers twists and turns. Then off to the next stream.

After 10 or so days of surveys, we start looking at our middle run systems. Many of our middle run systems are on smaller island streams including those on Prince of Wales Island. These smaller rivers often have fish that hold longer in the intertidal areas waiting for a good rain to move into their spawning areas. So our surveys are shorter initially as we fly by the intertidal areas, do a circle or two and then move on to the next stream watching the shoreline for any fish movement. We are always looking for “jumpers,”an indication of a school of salmon. In mid-August we start looking at our late run systems and may count pink into late September. On any given day a four hour survey will consist of 30-50 streams. A big day will be the completion of four of our survey forms for a total of 56 streams. 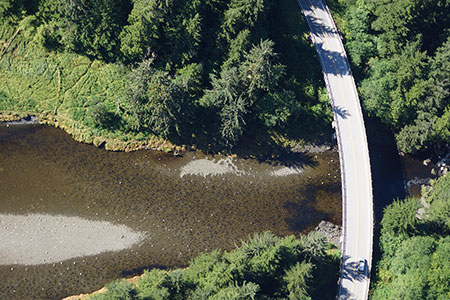 During the middle of the summer, when all systems are building, it takes five days to do a complete circuit in the area under Ketchikan management. So, every nice day starting in June, one of the three management biologists is in the air counting fish and boats to generate management decisions tailoring the year’s commercial fishing to the return of salmon. Our goal is to check important pink salmon streams every few days to insure that salmon are following historical return patterns. We want to ensure that our commercial fisheries aren’t taking too many salmon of any segment of the run. We want to spread out the harvest and take some fish from each portion of each stock without harming any rivers return.

One thing unique about Alaska is that each area biologist has control over the fisheries in their area and has a passion to ensure that all of the salmon populations under their control remain healthy.