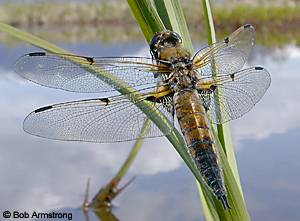 On a warm summer day in Alaska, a fat black and blue-green dragonfly cruises the horsetails at the edge of a shallow pond. It’s a delicate emerald, one of about 30 species of dragonflies found in Alaska. This male is patrolling his territory, but he’s not looking for food. He’s hunting for a mate.

Biologists John Hudson and Bob Armstrong of Juneau discovered the delicate emerald last summer along Peterson Creek near Amalga Harbor. It was the first time the dragonfly had been documented in Alaska. Hudson and Armstrong are studying the distribution of Alaska’s dragonflies, identifying new species and photographing the colorful insects for a book, “A Field Guide to the Dragonflies of Alaska.”

“Last summer we added three new species to the list,” Hudson said. “There may be another seven or eight, but I doubt we’ll go over 40 species in Alaska.”

Alaska’s dragonflies range from small damselflies, like the metallic-green sedge sprite and the boreal bluet, up to the five-inch-long lake darner, the largest dragonfly in the state.

“Darners are the biggest dragonflies, and we have seven species in Alaska,” Hudson said. “The lake darner is a big, purple-blue dragonfly with a dark background. It will fly all night long in the Arctic and it can fly in the rain, which is very unusual for dragonflies. It will actually generate and maintain body heat.”

Azure darners cruise the shores of Prudhoe Bay in the Arctic, black meadowhawks skim the marshy ponds of the Interior, and mountain emeralds feast on mosquitoes in the Southeast rainforest. Of Alaska’s 31 known species of dragonflies, 18 can be found in the Juneau area.

Hudson said dragonflies live just a month or two as the maneuverable aerial hunters we see in summer, mating in flight and skimming the water to lay their eggs. Dragonflies spend most of their lives under the surface in a larval form, as predators of aquatic insects. With a lightning strike of their powerful jaws, dragonfly larvae can even take small fish. Depending on the species, dragonflies may spend just a few weeks, or as much as three to five years, as larvae before they climb out on a twig, sprout wings and metamorphose into adults.

Adult males tend to establish territories along the water’s edge. They’ll go off into meadows and roadsides to feed, returning to the water to seek mates.

“When you see the males cruising the sedges and shorelines, they’re hunting females,” he said. “They’ll take the occasional bug, but if they’re near water, they’re defending a territory.”

“The females are very secretive and tend to lie in the sedges – sometimes you’ll hear the cellophane rattling of their wings against the plants,” Hudson said. “Females don’t come near water until they’re ready to mate; they forage off in meadows and open areas away from water.”

The reason: the males are very aggressive. The sight of two dragonflies hooked together – flying in tandem – is familiar because an available female is a magnet for the cruising males.

“They’ll get attacked from above – the male grabs her and clamps on with these forceps-like structures on the tip of the abdomen,” Hudson said. “He’ll tow her around like a truck pulling a trailer.”

The male transfers a sperm packet to the female and she stores it after it’s exchanged. It’s only when she starts laying eggs that she fertilizes them; they get fertilized on the way out. Some species insert the eggs into plant tissue, either above or below water, others drop the eggs right into the water, or onto wet moss or sediment.

Males have a couple strategies to insure their sperm fertilizes those eggs. They have a special organ that will search and destroy the sperm from previous suitors, in the event the female is already carrying a sperm packet. Some species stay in tandem until she’s ready to lay eggs. With other species, such as emeralds and the four-spotted skimmer, Alaska’s state insect, the male will release her but guard her, hovering above until she’s laid their eggs.

Hudson and Armstrong made a major dragonfly foray through the state last summer, and they have another trip planned for next summer to finish photographing known Alaska species. The project includes documenting the distribution and relative abundance of Alaska’s dragonflies as well.

Both are educated as fisheries biologists and their knowledge of natural history is extensive. Hudson, the son of an aquatic insect biologist, has collected insects since he was 6 years old. He studied insect and fish interactions for nine years as a researcher for the Forest Service, and looked how salmon carcasses benefit the food web, particularly with respect to aquatic insects.

Armstrong wrote and photographed the well-known “Guide to the Birds of Alaska,” and co-authored “The Nature of Southeast Alaska.” He’s responsible for the photography side of the dragonfly project.

There’s a trick to getting close-up, tack-sharp photographs of dragonflies, Hudson revealed. “We capture them and place them in a cooler with ice until they’re subdued and groggy,” He said. “Then we place them in the pose we want. They cling to a branch and we photograph them, then they just warm up and fly off.”