170,000 Fish in Hand
A look inside DIPAC's salmon tagging proces 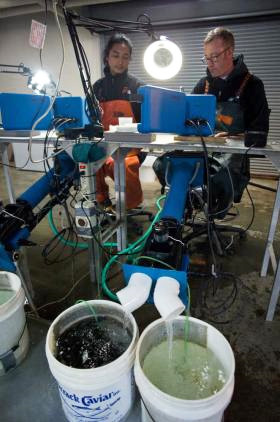 Every fall, workers at the Douglas Island Pink and Chum hatchery spend weeks handling tens of thousands of Chinook and coho salmon individually, clipping their adipose fins as a sign they come from a hatchery and tagging them with a one millimeter long coded stainless steel wire.

As DIPAC is releasing a million of each species this year, that’s 70,000 coho and 100,000 Chinook that hatchery workers will handle individually this fall.

First, hatchery workers anesthetize the fish, putting a chemical in the water that immobilizes them but allows all essential functions to keep working.

They then clip the adipose fin and hand a container of clipped fish to the tagger, who operates a tagging machine that injects a tiny coded wire tag into the cartilage of the fish’s snout. The tagger then puts the fish into a chute that sorts them into those whose tags took, and those whose tags didn’t. (Those who didn’t is relatively small.) 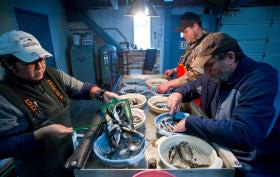 Tagging fish is a balance of quantity and quality, said evaluation lab coordinator Jon Livermore, who was tagging fish.

“We have to be careful and do a good job,” Livermore said.

The tags are so tiny that they have to be examined under a microscope to see their etching.

Every hatchery on the West Coast uses coded wire tagging for fish managed under the Pacific Salmon treaty, Focht said. For DIPAC, that’s a three to four week process, depending on its release goals for the year.

Thermal marking (in which the fish’s ear bone is shaped via fluctuations in the temperature of the surrounding water as it grows) is much easier, but not all hatcheries on the coast have access to that technology, Focht said. 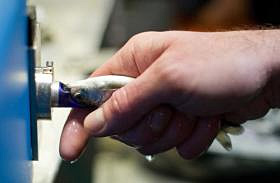 A salmon gets a 2 millimeter coded wire tag inserted into its snout during the tagging process at the Ladd Macaulay Visitor Center at the Douglas Island Pink & Chum Hatchery. Michael Penn/Juneau Empire

“This is more labor-intensive. Both have pros and cons,” he said.

“We have warmer water this year so fish are bigger a little earlier,” said fish culturist Sarah Aavedal, who was clipping adipose fins.

That means they’re tagging a little earlier as well.

Fish tagged now will be released next spring and will return to their release sites in late summer and early fall 2016.

“Now is the time to make sure we do a really good job,” Focht said. “Come next spring, it’s too late to do anything about it.”

• This article first ran in the Juneau Empire and is reprinted with permission. Contact Mary Catharine Martin at maryc.martin@juneauempire.com or at 523-2276.