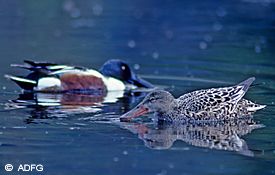 Every summer, the tall grass and reeds of Alaska's marshes and shorelines hide million of flightless ducks and geese. For just a few weeks each year ducks and geese completely lose their ability to fly.

All birds molt at least once a year, shedding old feathers and growing new ones. Feathers are made of keratin, the same protein that makes up our fingernails and hair. A feather isn’t living tissue, and if it wears or breaks it isn’t repaired, it’s replaced.

Males molt during the nesting season, and the females start a little later. The timing couldn’t be better. Molting happens when food is plentiful, after the high energy demands of mating and laying eggs have been met and before fall migration. It’s a time when downy ducklings and goslings are swimming but are too young to fly themselves; the adults would be unlikely to leave them unprotected even if they could fly.

By lying low in the wetlands and marshes, flightless waterfowl can escape to the water – or duck into the brush – if a predator approaches. By late summer, when it’s time to migrate, the juveniles and adults are ready – with a new set of feathers.