A Wing and a Tail for Science 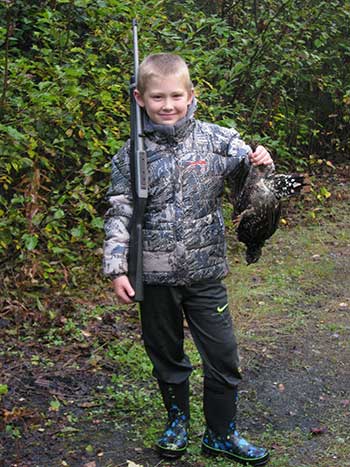 Max Merizon with his first grouse.

Max Merizon ate the first grouse he shot, but he dedicated the wing and tail to science.

Biologists with ADF&G’s small game program are asking hunters to send in a wing and the tail from each grouse or ptarmigan they harvest. In the 2013 regulatory year, 1,200 samples were submitted, and so far submissions this year are on track to exceed that.

“We verify the species, age, and sex,” Merizon said. “If we get a large enough sample size from an area, like a (game management) subunit, we can estimate the production of juveniles from the previous breeding season.”

A good set of samples provides insights into the age structure of the population, and over time, biologists can also see trends in chick production and hunter harvest.

Wildlife biologist Cameron Carroll has been working with the small game program in Fairbanks since February. In the past, samples from Fairbanks went down to Merizon in Palmer, but Carroll is keeping the samples in Fairbanks.

“I can age and sex the birds here, and it really helps - if people want them back, I can get them done in a few days and they can pick them up again and use them for trapping,” she said. “So far (this fall) I’m getting a mix of sharp-tails, ruffed and spruce grouse. No ptarmigan yet, ptarmigan numbers seem to be down.” 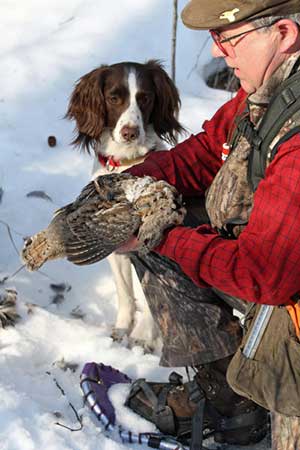 “This will help us manage upland birds,” she said. “We really hope people will get involved.”

Merizon said response has been good. “We’ve received good samples from a lot of passionate hunters, and many lodges that offer grouse and ptarmigan hunting to their clients in the fall have engaged the program with quite a bit of enthusiasm.”

Fish and Game offices across Alaska are providing Tyvek envelopes for the samples, and Merizon is asking hunters to simply provide the harvest date and approximate location where the birds were harvested when sending in the samples. Separate postage paid return envelopes are also available for sending the wing bags, or samples can be dropped off at fish and game offices.

“If you don’t have one of the Tyvek bags just use a paper bag,” Merizon said. He prefers that the sample be frozen before it’s sent in, but it’s not essential.

“We ask if there is a lot of blood or moisture from rain, dry it off first,” he said. “If folks leave me their contact info we’ll make sure they get the information from the sample back. If the hunters are trappers and want the wings back for trapping bait, we’ll send them back.”

During the spring of 2012, Fish and Game asked a select few hunting license holders to complete a survey about their small game hunting effort, harvest, and general observations while afield during the hunting season. Merizon said about 11 percent of those contacted responded to the request. 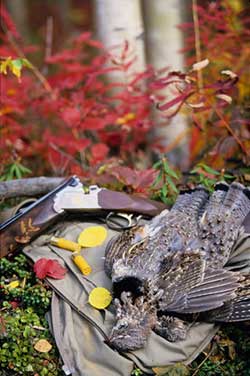 “We learned a lot with that pilot effort,” he said. “This year was the second edition of the statewide small game hunter survey, and this go around we had a 30 percent response rate. We’ve been learning the number of small game hunters statewide and the general locations where a lot of activity occurs. There’s a significant amount of small game pressure along the road system; ptarmigan and spruce grouse are very popular, especially when snow shoe hare populations are low like they are now.”

He said he hopes to have the results of this years’ survey out by the end of the year and available online on the small game website.

Merizon said the small game program is also partnering with the USGS on a grouse study, and the state is sharing samples, without any of the hunter-specific -information.

“They’re looking at blood parasite loads in those samples, so were getting a little more information out of the samples,” he said.

Hunters generally have a pretty good idea about the species of grouse they are after, but ptarmigan species can be a little trickier to identify, and aging and sexing birds takes a little practice. Hunters will soon be able to master that skill – a new Grouse and Ptarmigan Age and Sex Guide is in the works, a small pocket guide illustrating how to age and sex grouse and ptarmigan for the hunter. It should be available in late October. 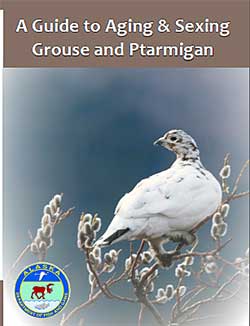 A new pocket-sized guide for grouse and ptarmigan will be available for hunters in late October.

“People who are interested can do this in the field themselves,” Carroll said. “What species is this? A lot of hunters will know which species they just harvested, but with the help of the field guide they’ll be able to determine the sex and age of the bird. Is it a first year or second year bird – you can tell by the way the feathers look, especially in the fall when birds are replacing feathers lost during the late summer (or early autumn for ptarmigan) molt.”

Regarding the samples, hunters are asked to remove the following parts:

One whole, clean, intact wing (both grouse and ptarmigan)

Head, if possible, to identify between rock and willow ptarmigan (ptarmigan only)

Samples can be sent to:

or dropped off at any area office and local biologists will send them in to Carroll and Merizon.

Visit the ADF&G website for more on small game hunting in Alaska.