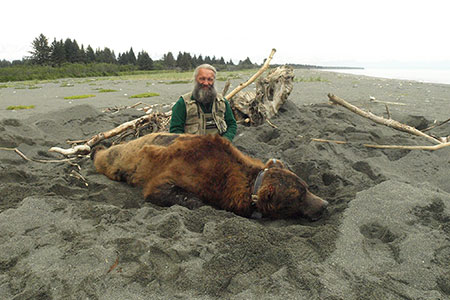 LaVern Beier with a Malaspina bear. Malaspina bears spend a lot of time scavenging on the beach, and many of the bears were caught on the beaches. Footsnares were anchored to big beach logs, bears were snared, darted with an immobilizing drug, processed, collared and released unharmed.

Alaska’s border with the Yukon Territory runs 700-miles north to south, jogging east at the Malaspina Glacier and the Gulf of Alaska. That area, where the Southeast Alaska panhandle meets Southcentral Alaska, is virtually uninhabited, a rugged beach landscape of tide flats, wetlands, young forests, rising foothills, barren rock and glaciers. In many places, trees are growing on glacial ice.

“It’s an amazing place to work,” Crupi said. “I’ve seen grey whales 15 feet off the beach. Lots of marine life washes up, a dead sea lion, sharks and skates.” The west side of Yakutat Bay is part of Wrangell-St. Elias National Park and Preserve, and the National Park Service is cooperating in the study.

Researchers are studying bears southeast of Yakutat Bay as well. “The topography is completely different there,” said Beier. “The Malaspina side of the bay is a moonscape compared to the Yakutat Forelands.” 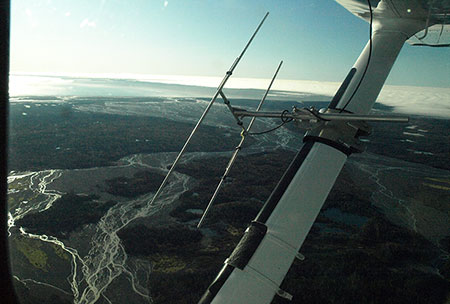 The Malaspina Forelands. The bears' radiocollars have GPS and VHF devices, and the VHF transmitter allows biologists to locate the animal. The antennae is picking up a VHF signal.

One 6-year-old male bear was collared near the Yakutat city landfill. Over the course of a week, he hiked about 35 miles north along the eastern shore of Yakutat Bay to its head at Disenchantment Bay. At 2 am he plunged into iceberg-laden waters for a three-mile swim to the Malaspina Forelands. He spent two months traveling around the forelands and then swam back to Yakutat.

“Why would he do that,” asked Beier. “Why would he leave all those abundant resources to go over there? You’d think it would be the other way around.”

He died shortly after he returned.

“We found his collar about 100 yards from where we collared him,” Crupi said. “He was dead, a pile of fur and bones, we don’t know what happened. But in the days of VHF collars (which only transmit a radio signal and don’t store information) we would’ve thought he’d never left the area.”

The collar data revealed details of his sojourn. Logging temperature and a location point every 30 minutes, data shows the temperature on the collar dropped from 68 degrees to 34 degrees at the end of his 90 minute swim. He hunkered down for a day of recuperation after the icy swim, then spent May and June – the mating season – exploring a 150-square-mile area along the southeast side of the Malaspina Glacier, moving from the coast to the foothills of the St. Elias Mountains and back.

“Not a lot of bears go to the high country,” Crupi said. “But he spent the majority of May in high elevation sites.”

The Malaspina bears prefer low elevation habitat that is a mosaic of colonizing forest, shrubs, kettle ponds and riparian zones. Glaciers, ice, and salt water are generally barriers to movement, but not always. One bear collared on the Malaspina side, an 8-year-old male, spent a month circumnavigating the entire Malaspina Glacier, covering more than 130 miles. “He also spent a week in the high country,” Crupi said. “Then he spent a week foraging at Point Riou (in Icy Bay) and in five days he traveled 60 miles back along the coast to where he began.” 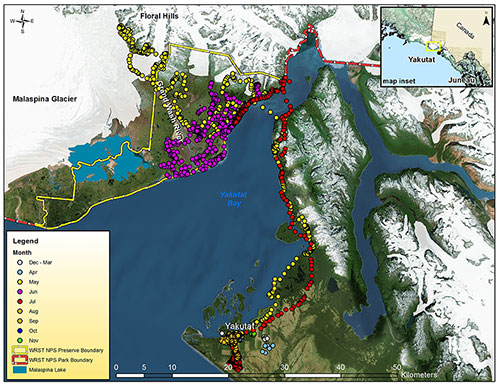 A map showing the travels of Bear 722. The blue dots near the town of Yakutat in the bottom center indicate his location in April, the yellow dots show his trek north in May, his swim across Disenchantment Bay at the head of Yakutat Bay, and his travels west across the forelands and up to the Floral Hills in the foothills of the Saint Elias Mountains. Purple dots show his locations in June around the forelands and red his trip back to Yakutat.

For the most part, bears stayed within a home range, traveling five or six kilometers a day in search of food - but that varies with the season. “We assumed females with cubs would have the smallest home range, and they do,” Crupi said. “Sex and season are strong predictors of home range. Subadult males have the largest.”

“Home ranges are smallest for everyone in the spring and larger in late summer when they’re looking for fish and strawberries,” Crupi said.

Wild strawberries are abundant on the coast in the area. Beier said at times in summer the aroma of ripe beach strawberries was so strong he could smell them from the helicopter flying overhead.

The picture that’s developing of what most bears usually do has bears waking from hibernation in the spring and feeding on emerging, green vegetation. “Most come straight down to the flats at low elevation, eating the first spring green up,” Crupi said. “Females with cubs stay higher up and seek south-facing slopes with green up. They’re avoiding other bears and not moving much.” 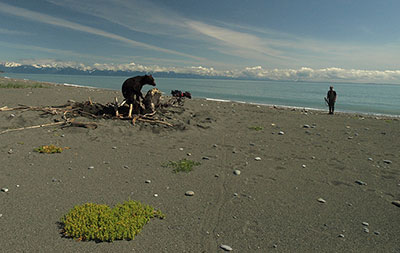 The average date for den emergence is April 29, with a range of a few weeks. The average date for denning up is Nov. 24. The bears in the Malaspina area seek out dens at about 155 meters in elevation, about 500 feet. That’s a striking contrast to brown bears in other areas. Admiralty Island bears typically den several thousand feet above sea level, and bears in the Haines area den at about the 2,800-foot level on average. Nov. 24 is also later than average for denning, which Beier attributes to late season coho in area streams.

Crupi knows where the bears hibernate because the GPS collars tag the location. Location is logged every 20-30 minutes between April and November; to extend battery life when the bears are hibernating, a location point is logged just once a day from December through March.

The collars also record temperature and activity every ten minutes. Movement triggers a mercury switch, and the number of times the switch moves in the 10-minute period is logged. “We can tell strenuous activity from mild activity,” Crupi said. A burst of strenuous activity accompanied by a drastic temperature drop likely indicates a bear is fishing.

Collars are equipped with VHF radios, which transmit a location signal. A biologist with an antenna homes in on the signal and can locate a bear – or at least a collar. The signal changes if that collar doesn’t move for six hours – known as a mortality signal. Some of the collars can periodically transmit data; others must be retrieved before the data can be downloaded. The collars are designed to “blow off” after a period of time so biologists can retrieve them. All the collars in the Yakutat Forelands study area will release in 2015. 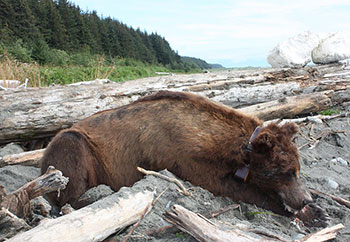 A burst of strenuous activity followed by no activity can indicate a fight to the death. Crupi and Beier have investigated several of these. “We’ve found several collars torn off in bear fights,” he said. “One collar was turned off after all this activity, and we found this big torn up area. No vegetation, all the trees were shredded. It gives you an eerie feeling.”

“You can just imagine the scene,” Beier said. “Some of the collars are just shredded; like a bear has figured out he can use it as a mouth-hold and grabs the collar. Some are torn lengthwise, or you see these big canine punctures. Strife amongst bears.”

Crupi said an 11-year-old female bear was killed and eaten in August, with just a pile of fur and a few bones remaining.

With the conclusion of this research project, Crupi and his colleagues have written up some of their findings in a paper, Movement patterns, home range size, and resource selection for brown bears near the Malaspina Glacier, Southeast Alaska

Crupi and his colleagues are still working on the study of the Yakutat Forelands/Landfill bears.

Riley Woodford is the editor of Alaska Fish and Wildlife News