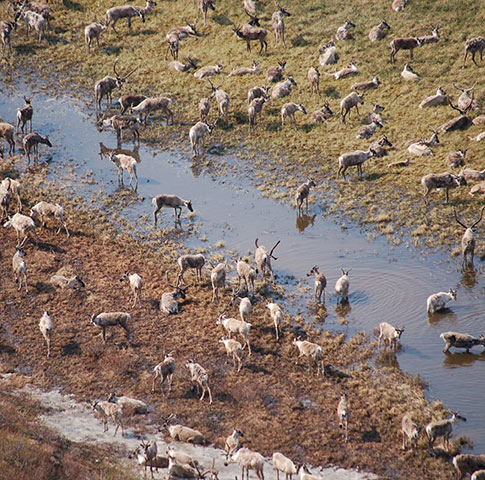 “Caribou numbers fluctuate naturally,” said Jim Dau, ADF&G biologist who has worked with the herd for more than 25 years. “However, we’ve only had the technology to accurately count caribou herds since about 1970. The current WAH decline is still within the range of change documented for this herd in the past. ”

If current trends in adult mortality and calf survival continue, it may become necessary to reduce harvest levels on this herd as recommended in the WAH Management Plan (2011). If so, these would be the first harvest restrictions implemented for the WAH in over 30 years. 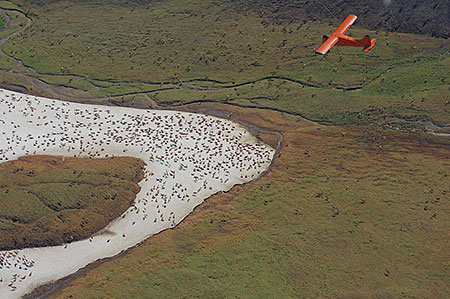 “I’m often asked, ‘Why the decline?’ In truth, we don’t have data to completely answer that question. But it appears that summer and winter weather combined with predators have affected survival during recent years,” Dau said. “Disease does not appear to be a factor, caribou have generally been in good body condition throughout this decline, and we don’t think harvests initiated it. But, if harvests remain stable, they will increasingly affect the population trend as herd size goes down.”

Caribou bunch up in the summer in response to insect harassment. Radio collars are used to find them and the groups are photographed from the air. The animals in the photos are later counted and herd size is estimated based on the proportion of collars found and their distribution among groups. During the 2013 census, the herd was highly aggregated in a small number of discreet groups, and very few caribou were found outside of the main aggregations. The photos were generally clear with good contrast, and were counted by one individual with extensive experience counting census photographs. To verify accuracy, 10 percent of the photographs were recounted. The difference between the original count and the recount was less than two percent, not statistically significant. 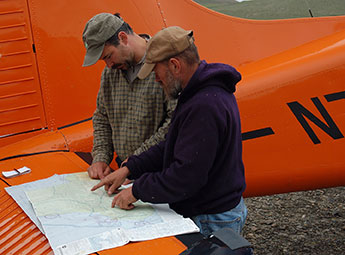 The Western Arctic Herd ranges over a 140,000 square-mile area of northwest Alaska bounded by the Arctic Ocean, the lower Yukon River and the trans-Alaska pipeline. About 40 communities and 13,000 people live within its range. For indigenous people, the herd is both a vital link to their cultural heritage and a staple source of food. The WAH is also important to visiting hunters, and is an important source of income for commercial operators that provide hunting and transport services. Given its large size, the biological importance of the WAH to northwest Alaska has been huge.