Snails, Ducks, and You 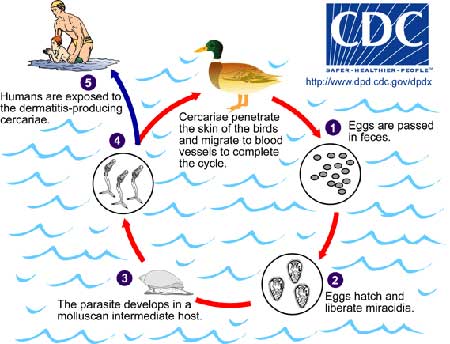 Because they are so tiny, you will probably never see a schistosomid, but you will likely make their acquaintance if you spend any time swimming in certain sloughs, ponds, and lakes of Alaska.

Schistosomatidae is a family of blood flukes. Most species carry out their life cycle by parasitizing molluscs and vertebrates. In Alaska, the hosts of choice are freshwater snails and ducks, but they are not very savvy critters, and so, will occasionally burrow under the skin of unsuspecting swimmers. Fortunately, the flukes cannot survive in humans. They quickly die, leaving behind itchy, red welts. The medical community refers to this affliction as cercarial dermatitis. The common name is Swimmer’s Itch.

Schistosomids live out their lives in sloughs, ponds, and lakes that contain snails and are frequented by ducks. The parasite needs both of these animals in order to thrive. An Infected duck releases eggs in its feces. The eggs hatch in the water as the life stage called miracidia. The miracidia infect snails and become cercariae which are released as free-swimming organisms that penetrate the skin of waterfowl . The cercariae migrate to the blood vessels, completing the cycle. As mentioned, misguided cercariae sometimes penetrate the skin of humans which quickly leads to the wayward parasite’s demise; as our immune system does them in, leaving behind the tell-tale red welts, which usually clear up within a week.

Swimming in shallow water, along the shoreline, increases your chances of the cercariae getting under your skin, since the snails live on the aquatic vegetation and silty bottoms of the ponds. Because children tend to swim and play near shore, they are more susceptible to being infected.

Fortunately, you can thwart most, if not all, of the cercariae penetrating your skin by toweling off vigorously after swimming, especially your legs.

The species of the Schistosomatidae family we have in Alaska cannot survive in humans and therefore Swimmer’s Itch is basically an annoyance more so than an acute or chronic parasitic disease. However, Schistosomatids in Africa are adapted to using humans as hosts, leading to the parasitic disease, schistosomiasis. According to the World Health Organization, “In sub-Saharan Africa, it has been estimated that more than 200,000 deaths per year are due to schistosomiasis.”

So, if you develop a case of Swimmer’s Itch this summer, be glad you live in Alaska where the Schistosomatids are far more mild mannered than their African cousins.