The Disappearance of the Rusty Blackbird 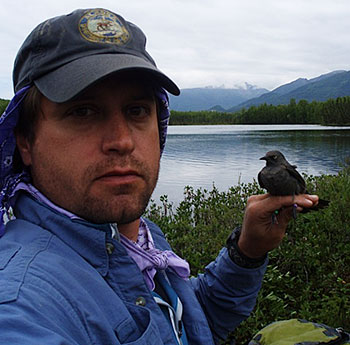 Rusty blackbirds are mysteriously disappearing from North America. These songbirds – cousins to meadowlarks and orioles – were described as “traveling in great noisy flocks” and “enormous numbers” just a few decades ago. Today their decline is now estimated at between 90 and 99 percent, the steepest decline of any songbird in North America. Biologists in Alaska and elsewhere are working to learn more about these birds, the reasons for the decline and possible solutions.

Rusty blackbirds spend winters in the American Midwest and South, and spend summers nesting in the boggy boreal forests and muskegs of Canada and Alaska. As the name implies, the birds have rust-colored tinges on their dark feathers. Adults have striking bright yellow eyes. They forage on wet ground and in shallow water, and emerging dragonflies and dragonfly larvae are an important food.

Wildlife biologist Dave Tessler has been studying rusty blackbirds since 2008. He represents ADF&G on the Rusty Blackbird Working Group, an international coalition of scientists formed in 2005.

Tessler said the decline first really came to the attention of wildlife biologists in 1999. The results of the Breeding Bird Survey, an annual event that looks at population trends for hundreds of North American bird species, indicated rusty blackbird numbers were way down. Biologists then compared other sources of information on bird numbers, such as Christmas bird surveys, and Feederwatch, a winter-long, citizen-birder survey of birds that visit feeders. The results were disturbing. Rusty blackbirds were in serious decline.

If more than 90 percent of the robins, mallards, or ring-necked pheasants in North America disappeared over the course of a few decades, people would notice. But an abundant, nondescript species of blackbird was a different story.

“Not much work was ever done on this bird,” Tessler said. “It has long been considered a pest by farmers, and there’s been no real concern or interest in these birds.”

For many years blackbirds were in a different class from most songbirds, which are federally protected. Farmers were permitted to “control” blackbirds as needed, and they frequently did, using lethal means. 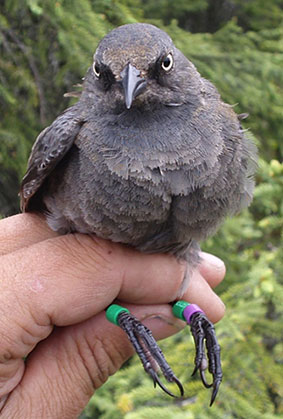 One remarkable thing about rusty blackbirds is how fast they grow - from hatching to fledging in two weeks.

“There were lots of control efforts in past, and they did knock the population down,” Tessler said. “But there's something else going on, because other blackbirds (also subject to control efforts) haven’t declined like that.”

Tessler has teamed up with biologists from the Forest Service, the U.S. Fish and Wildlife Service, and researchers across North America to learn more about these birds and the reasons for the decline.

“It’s been a really impressive effort,” Tessler said. “All these people thinking about the species, generating hypotheses for the decline and developing projects that address those hypotheses. We’re all aware of what everybody is doing and everyone works well together.”

There is a lot to learn about rusty blackbirds. Life history, for starters – what is the birds’ mating system, are they monogamous or polygamous, and what is their social structure? How productive are they when nesting, and what is hatchling and adult survival? Are there separate populations, or are all rusty blackbirds pretty close genetically? What are their migration routes and important stopover areas? Do they nest in the same area where they were born, as many birds do, or elsewhere? Are they affected by pollutants in the environment?

Clues to the Cause

The wildlife detectives have no smoking gun, but they have ideas, and one thing they have in their favor is technology. Tracking devices are improving and new tests for isotopes in feathers reveal clues about the birds’ movements.

Geolocators are tiny devices that measure time and day length. They can be very useful to learn about the migration pattern of a bird that returns to the same winter or summer areas, because the device must be retrieved so data can be downloaded.

“We used geolocators in 2009 on birds that returned in 2010, but it wasn’t real successful,” Tessler said. “The weather that winter was really hard, and we got only three of 17 back.” The birds were tagged in Anchorage, and evidence indicates they flew west and exited Alaska in the Tok area, which is a known flyway for migratory birds. They flew through Saskatchewan and then south. 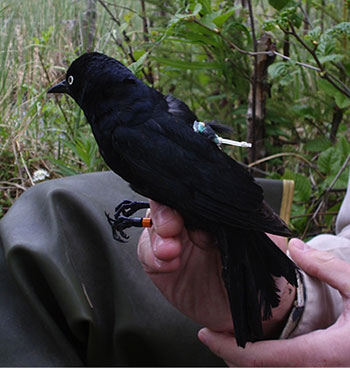 Geolocators can provide valuable insights into bird movements - in a best-case scenario with a migratory bird nesting in Alaska and wintering down south, an eight-month record of sunrise, sunset and date indicates the latitude and general location of the bird along the migration route south, its wintering area, and the return route.

“We’re going to try again this year – the technology for these devices has come a long way regarding the size and weight and method of attachment,” Tessler said. “We’re pairing our study with colleagues in New Hampshire. We’ll do 10 to 20 birds here in Anchorage, and they’ll do 10 to 20 in New Hampshire as well.”

A stable isotope analysis of a feather from each tagged bird may also reveal some valuable clues. Deuterium is an isotope of hydrogen and is found in water. Water in different places has distinct deuterium signatures, and scientists have developed maps of North America identifying these signatures. Biologists can look at the deuterium incorporated into a bird’s feather after it molts.

“That helps identify where the bird was when it grew that feather,” Tessler said. “When we catch a bird we’ll take a feather, and that will have a signature that we can compare to what is becoming a pretty good map of these signatures. When the bird comes back we’ll get a second feather; so in the second year we’ll have geolocator data and the feather from that year and we’ll compare those two things and the feather from previous year. So we can tell if it is going to the same place or a different place, we’ll get movements and behavior over two years.”

While there is a lot to learn about rusty blackbirds, one thing that is known is that aquatic insects are an important part of their diet. A recent study on the Copper River Delta revealed that 90 percent of the food given to chicks was dragonfly larvae. Diet could be related to the decline in a couple of ways.

“We found on the Copper River Delta that they are really cueing in on the availability of aquatic insects, especially dragonfly larvae,” Tessler said. “They really key in on the timing of the emergence of these larvae.” 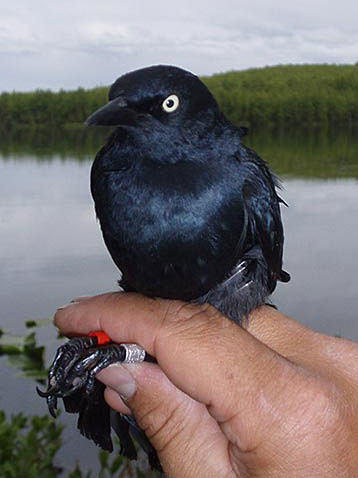 For many migratory birds, the timing of mating, nesting and rearing chicks is critical to success. Being early can be advantageous, unless you’re hammered by a late-spring blizzard or starved by a tardy spring. Nesting too late means the young might not be ready to migrate south in late summer. Birds need to find a lot of food for a nest full of hungry chicks. That’s where those big, fat dragonfly larvae come in.

“When these birds arrive the ice is hardly off the water, and the adults are gleaning spiders and whatever they can find,” Tessler said. “Then things melt and soften and everything comes back to life; they nest, and by time the eggs hatch the (dragonfly) larvae are emerging and the adults are provisioning the chicks with those things.”

One remarkable thing about rusty blackbirds is how fast they grow. “Their nestling period is really short; they go from hatching to fledging in two weeks.”

Stuffing those ravenous, growing chicks with big dragonfly larvae is important, and if the food isn’t there, the nest will fail. Tessler and his colleagues are exploring that possibility.

“We asked, ‘Is the emergence of these larvae changing somehow, and is something off on the timing?’ If the bugs emerge sooner, there could be a phenological mismatch; the timing of the food source doesn’t match the timing of the need to provision the young. It is a possibility.”

Rusty blackbirds are also vulnerable to the potential bioaccumulation of mercury – and the dragonfly larvae factor into that. Those larvae live several years as aquatic predators, basically at the top of the aquatic insect food chain. Tessler said that the bogs favored by rusty black birds are acidic, and acidic environments favor the natural processes that make mercury available to living systems, where it can be detrimental.

Mercury in the environment might be naturally occurring, or it could be present in areas where mining occurred. 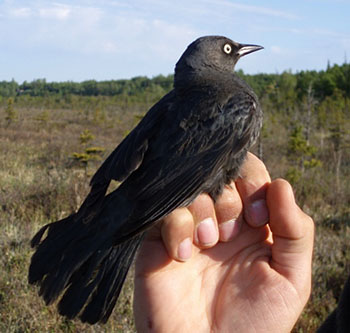 “In Alaska we have atmospheric deposition of mercury from China and Asia,” Tessler said. “We’re looking at mercury in rusty blackbirds in the Northeast (New England and Canadian Maritime Provinces) and by and large they have really high levels of mercury – much higher than other blackbird species in those areas. Now it’s hard to say if it’s too much, and we’re looking into that. That source is power plants.”

Understanding the mating system is important because a population decline could be related to a failure to find mates. A monogamous pair might separate during the winter and reunite in their nesting area in spring. If the rendezvous fails they may not nest.

“That’s not an issue it would seem,” Tessler said. “They’re polygamous; females will mate with multiple males, and vice versa.”

This spring, Tessler and his colleagues, as well as volunteers, will be finding nests and following the progress of the rusty blackbirds they locate. They’ll count the number of eggs laid, the number that hatch, and the chick survival. If the nest fails they’ll document why it failed. Nests will be monitored around Haines, Cordova, on Kuiu Island, Glacier Bay, and in Southcentral and Interior Alaska.

“We’ll compare that with data we’re collecting in the Northeast,” Tessler said. “We don’t know anything about juvenile survival once they leave here. We don't know if they don’t survive, or if they just don’t come back – are they site faithful? Maybe they just nest in other areas.”

The results so far are promising. “They seem to be doing pretty good in Alaska,” Tessler said. “The survival rate is good, and productivity looks good.”

The understanding of the nature of rusty blackbirds will grow tremendously in the next few years, and hopefully include insights into their mysterious decline.