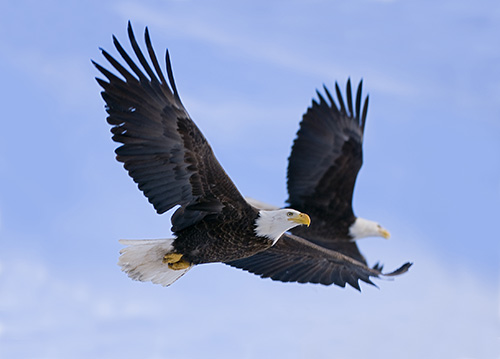 Sorry to disappoint you, but lemmings do not commit mass suicide and eagles do not snatch toddlers.

As a nature and science writer, I am sometimes called to verify or debunk stories about wildlife. The eagle-picks-up-child hoax is a good example. A colleague came in one morning a few years ago and showed me a video of an eagle swooping down and picking up a toddler in a park, dropping him to the ground after a few seconds of flight. The video had been on YouTube for four hours and already had five million hits. It looked pretty realistic, and my phone started ringing.

A few clues betrayed the hoax, but the biggest was simple aerodynamics. At the time, my toddler weighed 20 pounds. The wings of an eagle support the eight-to 12-pound bird as well as whatever the bird is carrying, and best estimates put the lifting power of an eagle at four or five pounds. But it’s not quite that simple.

Lift also depends on airspeed. The faster a bird is flying, the greater the lift potential. An eagle that swoops down can lift more than an eagle that lands and takes off. But there is no way an eagle is going to lift a toddler.

I’m skeptical of the eagle-snatched-a-pet stories as well, and every one I’ve looked into fell apart under scrutiny (in particular an oft-repeated 1993 Valdez gas station incident). No doubt an eagle might swoop in and check out a dog on a beach, land and eat a road-killed cat, or (in the case of a golden eagle) even consider attacking a lamb or goat kid. But that’s a far cry from flying off with a wiener dog.

Another common misconception about eagles is that their talons involuntarily lock. People see an eagle swimming, hanging on to a salmon that’s too heavy to lift, and think the eagle can’t release it. There is no involuntary locking mechanism; the hungry bird has simply decided the meal is worth the swim.

Mike Jacobson spent decades as an eagle management specialist for the U.S. Fish and Wildlife Service before he retired. 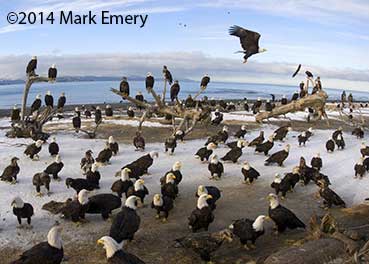 Eagles do not snatch dogs or children, not even if they were to use teamwork.

“They can let go,” Jacobson said. “It’s common for them to get a hold of a fish that’s too heavy to fly with…they can’t take off but they can tow it to shore, rowing with their wings. They’re pretty good swimmers. They have thick down so they float pretty well.”

Another misconception about eagles that most Alaskans are savvy to is their “majestic cry.” Movies often dub in the call of the red-tailed hawk because they don’t think eagles’ squeaky chirp sounds cool enough.

Movies go a long way toward perpetuating myths. I love “Jaws,” but it isn’t a documentary about sharks. The 1997 film, “The Edge,” which depicted a killer bear stalking a couple of lost men, claimed that once a bear gets a taste for human flesh, it goes rogue. Just like great white sharks, I guess.

That movie premise feeds things like the Alaska killer bear Internet hoax, which I’ve responded to dozens of times over the past decade. I can’t believe it won’t go away. The hoax springs from several pictures, which show a hunter with a big dead brown bear. The pictures are real. A hunter in Prince William Sound killed a very large brown bear. Someone took those pictures and an unrelated picture of a severed human leg and refashioned the tale, summarized as: The hunter was charged by a 1,600-pound raging grizzly and he emptied his gun into it, dropping it at his feet. Turns out it’s the “world record,” and he learns from officials that several campers in the area have disappeared, and sure enough, the bear’s stomach is full of human remains. The pictures and tale circulated on outdoor forums and hunting Web sites, and newspaper outdoor writers (in the Lower 48) even picked up the tale and repeated it. Successive versions became more lurid and outlandish. The Anchorage Daily News did an excellent debunking, but the tall tale still pops up. 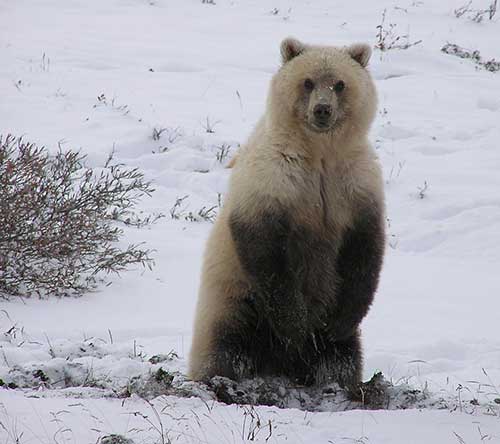 Bears stand up to get a better look and better catch a scent on the wind. It's not an aggressive posture. This brown bear is digging up roots to eat near the Sagavanirktok River in northern Alaska.

A few misconceptions I hear about bears: A menstruating woman is at risk if she’s camping – not true. Bears can’t run downhill – yes, they can. Brown bears can’t climb trees – yes, cubs can climb like squirrels and I watched a 300-pound adult shinny up a hemlock like a kid on a pole. And the common misconception that bears have bad eyesight – they see as well as we do, and they see in color. They just favor their outstanding sense of smell.

My least favorite hoax is the lemming suicide myth. Again, we have a “documentary” to thank for perpetuating this. Disney Studios produced those goofy, anthropomorphic nature films in the 1950s, ironically titled “The True-Life Adventure Series,” where mean coyotes hunted nice rabbits. Among them was “White Wilderness,” wherein they faked lemming mass suicide by throwing the little rodents off a cliff. The epic “lemming migration” was staged using tight camera shots and careful editing of a few dozen captive lemmings running on a lazy-Susan style turntable. A journalist with Canadian Broadcasting Corporation investigated the production and debunked it scene-by-scene in 1983. I asked several Alaska experts about it for an article I wrote a few years ago.

State wildlife biologist Thomas McDonough said they had to get the idea from somewhere, and he thinks Disney confused dispersal with migration and embellished a kernel of truth. Lemmings do have periodic population explosions, and people do sometimes see lots of lemmings on the move.

"What people see is essentially mass dispersal," said zoologist Gordon Jarrell, an expert in small mammals with the University of Alaska Fairbanks. "There's no question that at times they will build up to huge numbers. One description from Barrow does talk about them drowning and piling up on the shore." 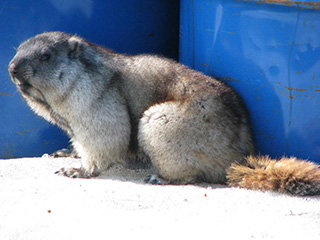 Jarrell said when people learn that he works with lemmings, the mass suicide issue comes up.

“It's a frequent question,” he said. “Do they really kill themselves? No. The answer is unequivocal, no they don't.”

I understand the appeal of these hoaxes. The lemming myth is a handy metaphor for human behavior, people acting like sheep (another animal metaphor) but with fatal consequences, and cartoonists love it. The eagle-snatches-a-pet stories usually have an appealing subtext: Either the husband secretly hates the wife’s yappy lapdog and is glad to see it go, or the heroic pet fights bravely and escapes.

But depicting bears as bloodthirsty is bad for bears, just as “Jaws” ultimately proved bad for sharks. And even though sometimes misinformation might be harmless, the truth is usually more interesting.

The final misconception I’ll address was perpetuated by the Alaska State Legislature. It’s a small thing, but it inspired this article. In 2009 the Legislature passed a bill calling Feb. 2 Marmot Day in Alaska, instead of Groundhog Day. I’m all for celebrating marmots, but part of the justification was that there are “no groundhogs in Alaska,” and I’ve since heard that mistake repeated. It’s not true. Interior Alaska is at the western edge of groundhogs’ range, and you can find them, or woodchucks as they are also known, in Alaska. But they don’t chuck wood. And since Alaska’s groundhogs are hibernating, they don’t predict spring.