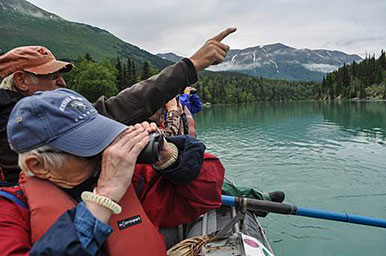 Take an abundance of birds, add a passel of people, toss in bird walks and bird talks, simmer for a weekend or more, and there you have it: a simple recipe for a successful bird festival. Since the First Annual Copper River Shorebird Festival took flight 24 years ago in Cordova, bird festivals have been springing up around the state to become popular additions to the birding scene.

“What’s not to like?” said Anchorage Audubon Society board president and long-time birder Mr. White Keys. “You don’t have a festival unless there’s an astounding natural event connected to it. Whether it’s a hawk watch or a shorebird migration, these are major movements of birds and you just want to be there at that time.”

Most festivals in Alaska are tied to spring migration when the birds tend to be more concentrated than in fall. It’s also when winter-weary residents are getting antsy, said Liz Gordon with the American Birding Association.

“It’s the start of the season. The birds are back so they get all excited to come out (to festivals) and see them,” she said.

The ABA website lists about 60 festivals across the country but many more exist. Alaska has at least ten, and they come in all shapes and sizes. Some last only a day, others extend across several weekends; some occur sporadically, others are institutions; some cater to a local crowd while others draw people from around the world.

Birding is big in the US and Alaska. The US Fish and Wildlife Service (USFWS) counted 47 million bird watchers in 2011, making birds the most sought after wildlife in the country. The survey also estimated 18 million people took trips to see birds, many travelling out-of-state to do so. In Alaska in 2011, more than 350,000 visitors looked for birds, making up 69 percent of total birders in the state. Alaska residents meanwhile chalked up one of the highest participation rates in the country, 30 percent of the population went birding that year.

Bird watching is often a shared joy, and festivals attract a devoted crowd of self-described “bird nerds.” White Keys said he’s an inveterate festival-goer. As keynote speaker of the Copper River festival last year, he poked fun at his fellow birders who were sitting ducks for the ribbing. 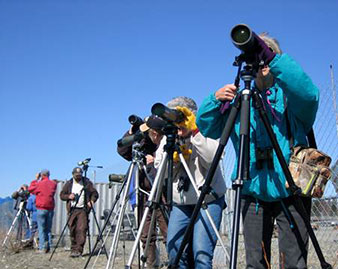 “They totally deserve it,” he said. “I mean, what could possibly be funny about competitive bird watching?”

Not all festivals are in spring—a few occur mid-summer or fall—and not all festivals celebrate birds. Kodiak has a Whale Fest in the spring while Sitka has one in the fall. Wrangell, meanwhile, celebrates both birds and bears, though not at the same time. For a list of all the festivals, related events, and links to the festival webpages, visit http://www.adfg.alaska.gov/index.cfm?adfg=viewing.events . The following is a quick glance at the main birding festivals coming up this spring.

Month of April: The Alaska Hummingbird Festival in Ketchikan is named for the rufous hummingbird, Alaska’s most common hummer, which typically begins showing up in southern Southeast during the last few days of March. The festival spans the entire month of April, starting with a popular juried art show on the first Friday that attracts entries from all over Alaska, according to organizer Leslie Swada of the US Forest Service (USFS).

Although the festival was started more than ten years ago to promote visitation in April, it has settled into a mostly local event with Friday night speakers, school events, and weekend bird walks. ADF&G fisheries biologist Andy Piston often leads a group onto Ketchikan’s rocky shoreline to watch for migrants headed up the Tongass Narrows.

Piston said Ketchikan may not be a major birding destination but it has a great variety of birds. The area also has reputation among Alaskan birders as a good place to pad an Alaska bird list because of its location on the northern edge of the range for many southern birds.

April 24-26: The Stikine River Birding Festival in Wrangell started 17 years ago as the Wrangell Garnet Festival but the name was changed in recent years to better focus on the spring migration. Organizer Corree Delabrue of the USFS said the shorebird migration on the Stikine River Flats, especially the great shimmering flocks of western sandpipers, is spectacular. Predicting the peak timing for the festival is challenging though and Delabrue recommends out-of-towners check ahead on the birds’ estimated time of arrival. 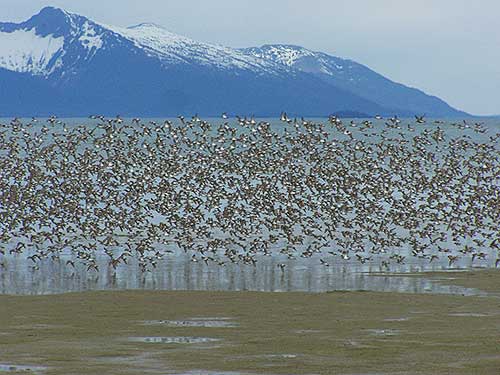 Accessing the flats is another challenge. While a field trip by boat is scheduled for Friday morning during the festival, Delabrue said local jet boat operators are available anytime to charter groups out to the flats.

Events during the festival include an artist in the schools, a crafts fair, and a photo competition. This year’s keynote speaker is writer Noah Strycker from Oregon who will also be sharing his interest in birds with schoolchildren.

May 8-11: At the ripe age of 24, the annual Copper River Delta Shorebird Festival in Cordova is the granddaddy of Alaska birding festivals, although Homer’s Kachemak Bay Shorebird Festival arrived just two years later. The two festivals usually fall within a week of each other or—as in this year—on the same extended weekend. The Cordova event is smaller and less accessible than its fellow fest but, for what White Keys calls “sheer tonnage,” it is unrivaled. Most bird watching occurs a few miles out of town along the broad expanse of Hartney Bay, but the delta’s vast mudflats packed with prime shorebird habitat stretch another 40 miles.

“Once you see the birds in flight and stand on the mudflats while they peep and eat all around you, it vibrates something in you that makes you care a little more about what’s going on in the world,” she said.

Briggs said the festival grew out of a bird symposium put on by the USFS in the early 1990s. Organizers of the scientific gathering approached the Chamber with a proposal to open it up to the public and incorporate more tourism-type activities. She said education has always been a key component, one that has resonated with Cordova schoolchildren over the years. In fact, some birders leading the walks this year developed their naturalist skills as kids in the local elementary school. 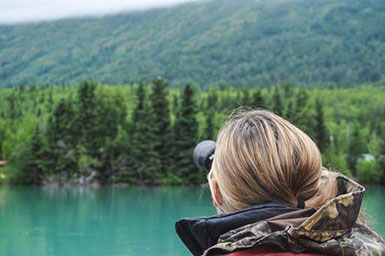 Swedish painter and naturalist Lars Jonsson is this year’s keynote speaker joined by guest speaker Susan Bonfield, executive director of the Environment for the Americas. Briggs said a new event being added this year is a children’s bicycle trip to Hartney Bay called the “Tour de Peeps.”

May 8-11: The seed for the Kachemak Bay Shorebird Festival, the state’s largest birding festival, was planted at a tourism conference that Poppy Benson of the USFWS was attending in the early 1990s.

“A woman had started a carp festival in Minnesota and I thought, for goodness sakes, if you can have a festival about carp then we could do one about our shorebirds,” said Benson.

At the time the City of Homer was considering a proposal to fill a section of coastal wetlands to accommodate expansion of an RV park. When Benson floated the idea of a festival to draw attention to Homer’s shorebirds and the importance of protecting their wetland habitat, the conservation community jumped on board. The Chamber, looking to expand the commercial tourism season, and the USFWS, interested in promoting environmental awareness, followed suit. The fill project was halted and a festival was born.

“Those three motivations all worked well together and all benefited from this one event,” said Benson, the first keynote speaker. “That’s why the festival took off and why it’s been sustained.”

The Homer event includes a crafts fair, music venues, art shows, boat tours and birding competitions. The Tim Schantz Memorial Scholarship also brings a young birder from outside (last year’s winner was from Mexico) to give a talk and see how a festival works. 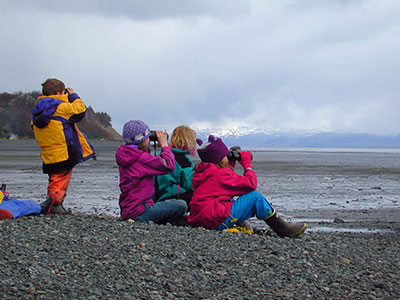 May 15-18: The Kenai Birding Festival began almost ten years ago to help develop the local birding community. Ken Tarbox, president of the Keen Eye Bird Club, said organizers were clear they did not want to compete with the Homer festival. Instead, they wanted to create a small intimate venue for local residents to learn about area birds and habitats and have face-to-face contact with local birding experts.

The early festivals took place at the Kenai Visitor Center but the venue has expanded to incorporate Soldotna, Sterling and other neighboring communities. “It’s grown from a couple locals giving talks to float trips, field trips, all types of children’s activities and the Peeps art show,” said Tarbox.

Tarbox said another popular event is the 24 hour viewing marathon at the viewing platform along the Kenai River flats. Organizers were still scheduling the keynote speaker as of press time.

June 5-8: The Yakutat Tern Festival is the newest addition to the scene, celebrating its fourth annual event this year. Organizer Susan Oehlers of the USFS said the festival is named for Yakutat’s birding claim to fame: the Aleutian tern. One of the largest and southernmost known breeding colonies of this rare tern exists in the area, which is currently at the forefront of Aleutian tern research.

Oehlers said the festival aims to heighten awareness of the rich natural and cultural resources of Yakutat. She said the festival continues to improve every year but still offers the basic components: field trips, seminars, a performance by the local dance group, guest speakers and artists.

Anne Sutton is the coordinator of the ADF&G wildlife viewing program.