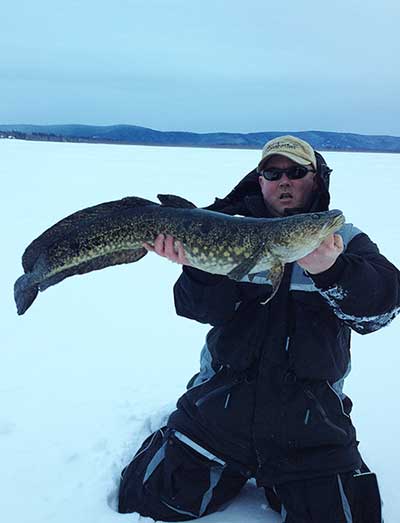 The author with a ice-caught burbot.

Catching a trophy size fish in Alaska is a thrilling milestone for any sport fishing angler. The excitement of reeling in and landing an enormous fish is overwhelming satisfying; however it’s no easy task. I know from firsthand experience by spending countless days on the water every year, making thousands of cast, and traveling hundreds of miles around Alaska fishing for an elusive lunker fish. The scarcity and rarity of landing a monster size fish is what makes the achievement so sweet. The moment should be shared and celebrated.

Many states host special programs to validate and recognize trophy fish catches, and Alaska is no exception. The Alaska Department of Fish & Game Sport Fishing Division Trophy Fish Program allows sport fisherman who catch their once in a lifetime fish an opportunity to receive certified recognition for their accomplishment.

Alaska’s trophy fish program includes 18 species of fish from both fresh and salt waters. Minimum weights set for individual species determine trophy size fish qualification. Fish are required to be weighed on certified scales and witnessed by a designated Trophy Fish Official. I was fortunate enough to experience the process myself this December when I brought up a large burbot while ice fishing at a favorite Interior lake over the weekend. 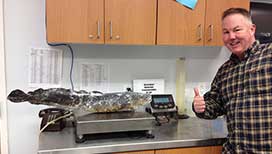 The author at the official weighing at the Fairbanks ADF&G office.

I learned from previously reviewing requirements found online at the ADF&G website that burbot caught in Alaska needed to weigh a minimum of eight pounds to qualify for the program. The website also contains links to the official rules of the program and listings of current trophy fish officials and locations. I knew my fish was not going to be a state record breaker, but I estimated the size to be around 10 pounds, a personal best for me and largest burbot to date I had caught. I kept my big prize frozen over the remainder of the weekend until ADF&G would be available for an official entry.

Monday finally arrived and off I went with my burbot in tow into Fairbanks Regional ADF&G office. I was greeted at the ADF&G by sport fish information officer Nancy Sisinyak. I eagerly told her all about my big catch as we walked to the laboratory building to have the fish weighed and measured. The fish was placed on a digital scale platform and ended up at 11 pounds 10 ounces. Victory! It was heavier than I estimated.

After an additional length measurement was taken at 35.5 inches, a trophy fish affidavit needed to be completed. Nancy collected information from my sport fishing license and details of the catch including location and method and lure type. She also took a photo with me and my new big buddy as a backup for digital photos I provided, which were taken at the catch site. Nancy further explained to me that the affidavit & photo entry would be sent to the ADF&G office located in Anchorage for processing and a certificate would be sent to my address in a few weeks. 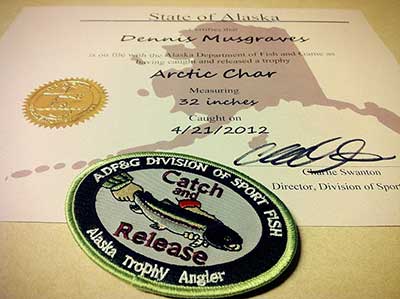 ADF&G maintains a data base on all the accepted entries in the trophy fish program which goes back to the 1960’s. I found it interesting to learn my fish was the second largest recorded burbot from the particular lake which it was caught from. The largest burbot from the lake was caught in 1995 and weighed 18 pounds. Guess I got some room to grow before I beat the lake record.

This was my first experience in actually bringing in a fish to ADF&G for a weigh in, and entry in the program. However my angling buddies and I have participated Alaska’s trophy fish program for several years. The program includes honorary trophy catch & release certificates and patches for nine different fish species of resident fish. This allows fisherman to use selective harvest techniques, or at locations of restricted harvest by regulation, and still receive acknowledgment for their angling achievement. 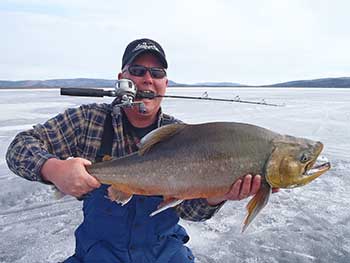 A trophy catch and release trout.

Entries for honorary trophy catch & release program are simple and can be made by completing the trophy fish affidavit, include a photo at the catch site, and sent via regular mail. Complete rules and instructions are available at ADF&G website or in regional printed Alaska sport fishing regulation booklets.

Alaska’s Trophy Fish Program is a great way for both resident and visiting anglers to be recognized when they catch a memorable big trophy fish by documenting the achievement and celebrating it with others.

Guest author Dennis Musgraves spends over 100 days annually sport fishing all over Alaska. Chronicles of his year round Alaskan fishing adventures can be found on a recreational website, which was founded to educate, inspire, and celebrate sport fishing in the Great Land. You can find him at www.alaskansalmonslayers.com