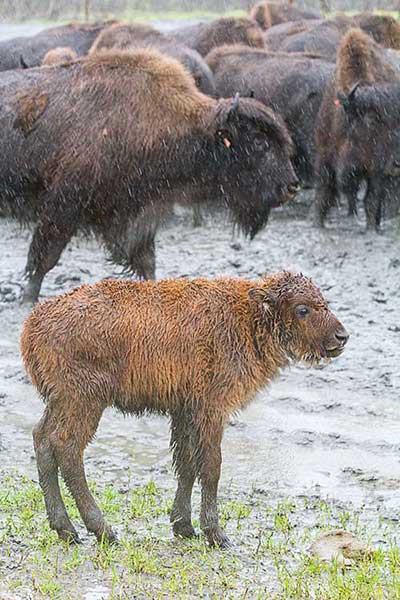 Wood bison with a calf of the year at the Alaska Wildlife Conservation Center. Doug Lindstrand photo

Keeping the biggest animal in North America captive requires a bit of teamwork. In mid-October, about three dozen volunteers converged on the Alaska Wildlife Conservation Center near Girdwood to expand the area enclosing the only captive herd of wood bison in the United States.

Like muskox, wood bison lived in Alaska until people hunted them out in the late 1800s. These large cousins to the familiar plains bison are well adapted for life in the north, and a few wild herds still exist in Canada. The Alaska Department of Fish and Game has been working for more than a decade to reintroduce wood bison to Alaska – just as muskox were successfully reintroduced after their extirpation.

In 2005, about a dozen Canadian wood bison were imported to Alaska. The Alaska Wildlife Conservation Center (AWCC) has been an important partner to the effort, housing the bison during a quarantine period and caring for the animals as reintroduction details are finalized. In 2008, 50 more bison were brought to AWCC, and since then, reproduction has doubled the size of the herd. Today, 130 wood bison are living at AWCC, and 40 calves are expected in the spring. The herd’s reintroduction to the wild is planned for 2015.

AWCC sits on 325 acres, with open-air enclosures for a variety of animals including moose, black and brown bears, musk ox, deer, elk and caribou. The U.S. Forest Service has provided land adjacent to the center through a renewable, 15-year lease so the pasture dedicated to wood bison can be expanded to a total of 265 acres. 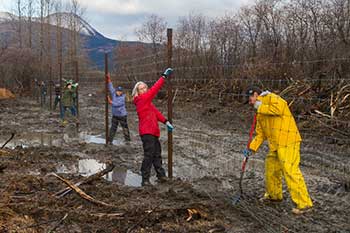 “You need a lot of land to manage them properly,” said Mike Miller, the director of AWCC. “Summer pasture is the best food you can give them. You don’t want to feed them hay in the summer, so you need land.”

A section of fence 8-feet-high and about a mile long was built in mid-October to enclose the pasture. Volunteers put in fence poles, rolled out the fencing, raised, stretched and tightened the fencing and fastened it to the poles.

“We have to build things for the public’s benefit, it has to look nice, and also for the animals benefit,” he said. “For bison, it’s best if the fence is on the inside of the poles, that way they won’t pop the fence, they’d have to knock the poles down.”

Can any fence contain a powerful, 2,000-pound bison?

“They’re used to being in herds, so they don’t challenge the fence,” Miller said.

Sometimes they do challenge each other, and that can compromise even the best fence. During the mating season, rutting bulls go from relatively peaceful plodders to aggressive pushers, and this fall that led to a problem. 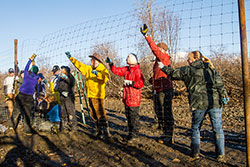 Unrolling and stretching the fencing.

“We had two big bulls fighting, pushing back and forth, and one pushed the other into the fence,” Miller said. “He pushed his butt back into the fence, and kept pushing him, and he pushed him over the top third of the fence and he got out.”

The unintentional, premature reintroduction of wood bison to Alaska was quickly self-corrected, thanks to the bison’s herd mentality.

“We didn’t want it to knock down the fence trying to get back in, so we left the gate open, and it came back in on its own about 3:30 in the morning,” Miller said.

The new pasture will be seeded with all native pasture grasses, and Miller said the seed was donated this fall.

Riley Woodford is the editor of Alaska Fish and Wildlife News and is based in Juneau. He visits AWCC every time he's in the area.