The Fingerprint of a Fish
King Salmon Reveal Their Secrets 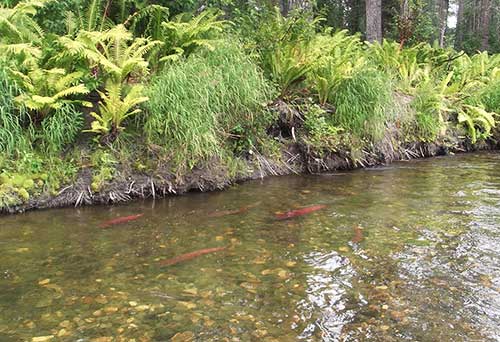 It was easy to spot the small school of tomato-red kings against the muted colors of the creek bed.

Hovering fifty feet above a scattering of spruce, alder brush and gravel, the pilot began to ease the helo down. Though it was a short trip from take-off to landing, when I exited the small aircraft, the land presented itself exponentially and without human intrusion as if only bears, water and salmon defined the limitlessness of open space.

Our purpose was to collect DNA samples from king salmon. It was late summer and the creek ran low and cold, spilling some distance away into the turbid Talkeetna River. I’d come prepared for adverse weather, the forecast was for rain, possibly high-winds. I had enough food and clothing to stay secure for the night should the helo not return. When the pilot flew out of view, the scope of wilderness demanded attention and perhaps momentarily I sought the unwanted scenario of being locked in for the night, disturbed by rain.

Field work is an aspect of my duties with Fish and Game that I selfishly admit doesn’t happen enough. Like anyone engineered with the desire to seek out rural makings, having hours-long staring contests with a computer weighs heavily on the psyche. The opportunity to be flown out in search of kings is an acceptable balance between office work and wander lust.

I held the heavy-duty bait caster in my hands and rigged the hook with orange yarn. Rod and reel is the most effective and least intrusive method of capturing these fish. I knew the kings would be reluctant to hit eggs or artificial lures as they were more focused on completing their lifecycle. It took a few casts to feel the rhythm of the shallow water, but soon enough I hooked a hefty female and was battling her as she pulled downstream. Certainly the hen, I estimated at weighing around 25 pounds, had lost little to no fight along the migratory path she followed here.

I landed her quickly. My right hand gripped the base of her tail. She lay momentarily docile in the slack edge-water, gill plates opening and closing like a thousand year old mystery. I reached for the clippers with my left hand and slid them over the hen’s axillary process, a spear-like protrusion above the pelvic fin. I clipped the tissue sample, removed the hook from the charcoal mouth and let the force of her tail guide her home.

The genetic information in that small bit of tissue is as unique to the fish as fingerprints are to a human. The Alaska Department of Fish and Game uses the axillary process to determine characteristics and profiles of fish. Sampling and cataloging genetic data from groups of spawning fish reveals fascinating information that enhances biologists’ knowledge and understanding of specific species in specific areas. The amount of information contained in one axillary process is incredible: where the salmon is likely to spawn, and a multitude of genetic markers that researchers use to create genetic profiles of certain species. 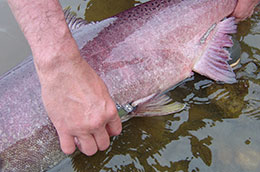 A salmon's axillary process, a spear-like protrusion above the pelvic fin.

Chris Habicht, a fisheries geneticist with ADF&G, says clipping the axillary process is a fast and easy way to obtain data from fish. “Sampling the axillary process is quick, does not change the appearance of the fish, and provides us with a sample that is adequate to extract DNA multiple times,” he said. “Each time we extract the DNA, we get enough DNA to screen hundreds of genetic markers, depending on the methods we use.”

Once the axillary process has been clipped from the fish, the sample gets dropped into a bottle containing ethanol. Those in the field are required to label each bottle with information such as GPS coordinates, species information and date. Each king we caught was quickly sampled and immediately released. I had little idea of what would become of the samples I bottled that day. It wasn’t until I got back to Anchorage that I began to take note of the vast collection of bottles containing samples on desks in the building and in a laboratory setting.

“Samples taken from spawning fish can be used over again and again to update the genetic profile of the population as new techniques become available,” Habicht said. “Unlike scale patterns, genetic profiles remain fairly constant within populations, so samples are valuable for many years.”

The department is involved in a number of sampling efforts across the state. While certain species, like kings, can take precedence over other species, the department samples and processes DNA from any number of species in a given waterway.

The samples also allow the department to identify and track spawning locations of specific salmon. This aspect alone is pretty mind-blowing. Knowing that X number of salmon could be sampled at a location in saltwater (where different stocks tend to mix), that with a high degree of certainty, the information obtained from sampled fish would point to where they would likely spawn. Through these studies, researchers have also been able to track oceanic movements of Alaska’s salmon. These patterns show that salmon reared in freshwaters of Alaska travel great distances from natal streams. Study a map of salmon migrations and you’ll notice Alaskan salmon cross oceans and international boundaries, spending however many years abroad, simply to cycle back home. 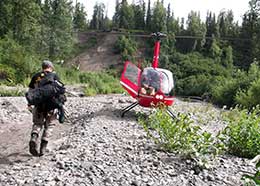 We clipped over 30 hefty kings that day; one male had to weigh close to 40 pounds. The fish were beautiful and when released swam vigorously back into position. The number of fish we sampled that day is minor when compared to the extensive collection of axillary processes ADF&G collected during the sampling season this year. It’s fascinating to be part of an agency that spearheads such research initiatives for the ultimate benefit and protection of Alaska’s prized aquatic resources.

Truly the science and data analysis involved in these projects goes beyond the scope of my academic background and understanding. I know enough to know that without these efforts, without highly scientific and thorough data analysis geared toward addressing specific species and projects, the department would be left in the proverbial dark. And I applaud those technicians and biological researchers who spend countless hours in the field studying fish, so that anglers like you and I can continue to have the opportunities we do.

As I write this, engaged in a stare-down with a quiet screen, winter descends outdoors. With the exception of a few late-run coho and maybe a few chums, this year’s salmon cycle is largely complete. I’m already looking forward to next year’s salmon runs and the potential to participate in ongoing departmental sampling efforts. Just as one could discover a thousand metaphors in the cycle of salmon, the turning of the season is yet another phenomenon of perspective and understanding that carries with it a unique discourse of knowledge and change.

Ryan Ragan is an Information Officer with the ADF&G Sport Fish Division in Anchorage. He and his family recently moved to Anchorage from Fairbanks and are enjoying discovering the many outdoor opportunities the area has to offer.