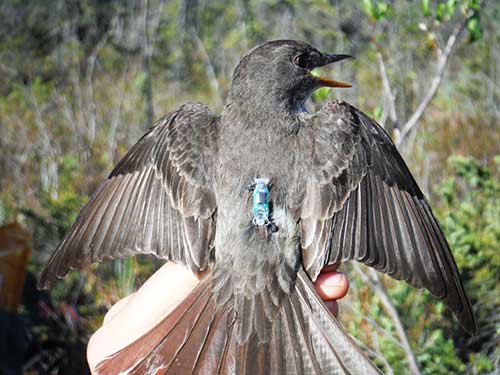 An olive-sided flycatcher equipped with a geolocator. When retrieved after about a year, the tiny device will reveal the bird's migration routes and wintering areas.

A little bird with a big voice is disappearing and Julie Hagelin wants to know why.

Hagelin, a biologist with Alaska’s Wildlife Diversity Program, is looking at olive-sided flycatchers, birds that spend summers in the state, mating, nesting and raising their young. These aren’t strictly Alaska birds – they are known to migrate as far south as Bolivia in the winter. The olive-sided flycatcher is considered “Near Threatened” globally, and declines are greatest in the west in the core of the songbird’s range.

Is the decline in the number of these birds related to something happening along the migration route? Is it happening in in the places they spend the winter? Is it a problem with reproduction on their summer breeding areas? Or is it a combination of things? Hagelin’s looking closely at the birds in Alaska, and working with colleagues in the U.S. Fish and Wildlife Service who are studying the birds elsewhere.

Olive-sided flycatchers are about 7-inches long with a 12-inch wingspan. True to their name, they catch flying insects. “They have this specialized feeding niche,” Hagelin said. “They prefer large flying insects—dragonflies, bees and yellow jackets—but they’ll eat smaller insects, too. Adults sit up high at the top of dead spindly branches at the very tips of trees, then sally into the air in a ’yo-yo’ like flight. This distinctive flight pattern is a means of aerial hawking for prey.”

Olive-sided flycatchers are familiar to many because of their distinct, loud call. Birders remember it as, “Quick, THREE BEERS!”

“You can hear these birds as much as 500 to 800 meters away,” Hagelin said. “The call, ‘quick three beers’ is unmistakable, it’s loud and profuse when the males are attracting females or defending territories early in the season. They can be really noisy, but birds are not densely distributed. You may find one here, and then another a few kilometers away.”

Hagelin concentrated her efforts in the Fairbanks area, and partnered with military biologists to monitor for birds on Ft. Wainright and Eielson Air Force Base. Collaborators with the U.S. Fish and Wildlife Service also surveyed south-central Alaska on Joint Base Elmendorf Richardson Air Station. Hagelin had some clues where to start looking: ADF&G biologist John Wright monitored olive-sided flycatchers in the Fairbanks and Glennallen areas back in the 1990s, providing some good historical data. Unfortunately, this spring the birds weren’t there.

“We targeted multiple historical sites that John Wright had studied, but this was a difficult year to find birds, probably because we had an unusual spring. The last big snowfall we had in May was likely not good for flycatchers, like many other species, that rely on insects to survive. We surveyed hard and listened for birds, but we had to look farther afield to find them and that took more time. Once females start laying eggs and parents begin tending chicks, they also quiet down and are even harder to find.”

Looking at the Clues

The late spring was one issue, as is the overall decline in numbers. While reasons behind the decline are unclear, several items are noteworthy.

The species is a “specialized aerial feeder,” and numbers and densities of flying insects available to the birds, particularly early on in the breeding season, are thought be important factors in their nesting success.

Adult mortality, during migration or on wintering grounds, also likely exacerbates the decline. Olive-sided flycatchers are long-lived and naturally have one of the lowest reproductive rates of any North American breeding songbird. They have relatively small clutches and sometimes need to re-nest just to rear a single brood per year. The migration route of Alaska populations is unknown, and learning more about migration is a major focus of the project. 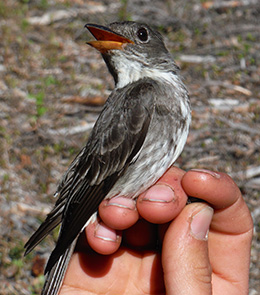 Deforestation and loss of winter habitat could also contribute to the decline. Studies of Alaska’s rusty blackbirds have shown that declines in their numbers are related to loss of critical habitat outside of their breeding habitats in Alaska.

Olive-sided Flycatchers also inhabit wetlands and are top insect predators, potentially making them prime candidates for the negative bioaccumulation effects of mercury contamination, particularly in habitats outside Alaska such as the east coast of the U.S. Mercury contamination is thought to impair the reproduction of other migratory birds, and mercury is also a common means of extracting gold in theflycatchers’ wintering habitat in South America. Gold dissolves in mercury, and then the mercury is boiled away, leaving the gold behind in a purified state.

Hagelin’s collaborative study will explore the flycatcher’s biology in winter and summer, an approach known as “full life-cycle” biology. It sounds intuitive, but often the causes for decline are not on the breeding grounds but elsewhere along a long-distance migrant’s annual route. The research team will document the bird’s presence and nesting habitat in Alaska and compare it to historical records, measure the numbers (biomass) of aerial insects they eat near their nesting areas and look at the relationship between food availability, nesting habitat and occupancy.

Hagelin is using a state-of-the-art tracking and recording device called a geolocator to study the migration route. The device senses and records daylight.

When equipping a small migratory bird with a tracking device, the goal is to avoid impairing the bird or altering its normal behavior. Conventional protocol calls for a device weighing less than three percent of the animal’s body weight. The geolocator, unlike heavier satellite transmitters, is tiny and weighs less than a gram. The device is attached to the bird by a harness that’s about half the diameter of a computer mouse cord. A 7mm long ‘light pipe’ (a photosensitive stalk that picks up sunlight) records sunrise and sunset, data that can be used to calculate the bird’s location.

“There is no way we could study this species without a light-weight geolocator,” said Hagelin. “However, in order to get our data we have to get the geolocator back off the birds the following year! Luckily, the biology of olive-sided flycatchers permits us to use this technology, as birds are very site faithful. We expect about 60 percent of breeding adults will come back to the same territory, or one nearby, the following year.”

Ideally, the geolocator data will show a biologist a bird’s migration route, the pace of migration, and the bird’s location over the winter.

“It's less accurate than a satellite transmitter but frankly it’s amazing you can get potentially get data from a 32 gram bird flying from Fairbanks to perhaps as far south as Bolivia,” Hagelin said. “We don’t know exactly where Alaska populations go yet, but that's the extent of their range. And the point is to reveal their migratory route.”

The birds are captured using a fine, almost invisible mist net, like a large hair net strung volleyball-style between poles. Decoys and calls are used early in the season to lure the aggressive, territorial males into the nets. Later in the season, birds are caught as they feed in nesting territories. All the birds are given colored leg bands measured, and blood and feathers sampled. This year eight were equipped with geolocators. 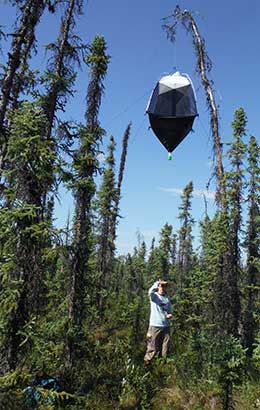 An insect trap. Flycatcher researchers are looking closely at the diet of these birds, and learning some surprising things about these insects.

Birds were hard to find this year, yet Hagelin and her collaborators located and monitored eight pairs of nesting olive-sided flycatchers, four in south-central and four near Fairbanks. The color banded only birds served as a control group. Hagelin said comparing the two sets of birds is a good way to test the effectiveness of the geolocator.

“This first season we want to test the method, and evaluate the rate of returns. That means to compare the geolocator birds to birds just color banded,” Hagelin said. “We want to be cautious; if all goes well, we should get back a sample on par with the control population.”

The Bugs on the Menu

Hagelin said they monitored the geolocator-equipped birds closely and, based on the birds’ posture and how they foraged and fed their chicks, they appeared to behave normally. Nesting sites were identified and nesting success was documented by multiple visits over the summer. Foraging rates were also documented, and biologists hung insect traps near foraging perches to learn more about the flycatcher’s diet.

“Many birds bred successfully and we suspect that foraging success may be correlated with rearing chicks. We also have another set of sites where birds were missing, but we know used to be important historically. We took insect data at both sets of locations and we can compare them,” she said. “We’d like to find out whether insects may be a factor limiting reproduction or perhaps the species’ decline is more related to mortality during migration, or both.”

Hagelin said she has identified some potential collaborators with the American Bird Conservancy; and a number of scientists in Alaska, Oregon, Washington, and Canada have expressed interest in participating, which may further expand migratory information within the species’ western range.

“Consequently, we could collect some of the most detailed migratory and breeding information for one the Western Hemisphere's broadest ranging migrants that is of significant conservation concern,” she said. “There is a lot of interest across a very broad range to try and understand where these birds are going,” she added.

Our data could be really informative for conservation efforts that aim to reduce mortality this species by increasing habitat connectivity and maintaining high quality breeding areas.”

Data on the breeding grounds in Alaska are also proving useful to scientists from other fields, she said.

“A couple cool things have come out of the insects we’ve caught so far,” Hagelin said. “(UAF, Museum of the North entomologist) Derek Sikes thinks he might have a new insect species for the state; and he’s expanded the range of two other species by more than 500 miles. No one has really done this kind of passive aerial insect trapping in the black spruce forest here, and we will be filling some basic knowledge gaps about insect communities upon which many birds and other animals rely.”

If all goes well, Hagelin hopes to capture more flycatchers next year, perhaps as many as 40 birds across the Interior, South-central, and Southeast Alaska, including a very promising location on Chichagof Island. The goal will be to outfit half with geolocators and half with color banding only.

Hagelin has outlined a multi-year project; field work will run through 2016.

Riley Woodford produces the Sounds Wild radio program for the Alaska Department of Fish and Game.