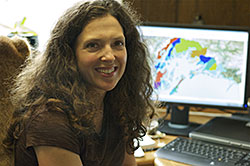 Westing was hired to fill the ADF&G job following the Crowleys’ decision to move to King Salmon earlier this year.

“Cordova appealed to us as a good place to raise our daughter, Sierra,” said Westing. “The schools are good and the community is a good fit for our family. We’ve already bought a house and we are committed to being here indefinitely.”

Westing’s husband Lance was hired as the new CHS science teacher. The couple have played an active role in the communities they have lived in before including Kodiak (where Lance grew up), King Cove, Kotzebue and Dillingham. Charlotte was the chair of Ducks Unlimited in Dillingham and has already been tapped by the Cordova DU chapter to help out. Lance has been a Tsunami Bowl coach as well as a basketball and cross country coach.

Westing has a BA in biology and speech communication. She earned a MS in environmental science at Alaska Pacific University. Her interest in a career as a wildlife biologist grew out of a desire to be in the field and work with diverse stakeholders. She spent five years as a commercial fisheries biologist in Dillingham and five years as the area wildlife biologist in Kotzebue. Although her job here focuses on terrestrial species, Westing says it all begins with the fish.

In addition to coming to Cordova with an understanding of commercial fisheries, her wildlife background meant she was able to hit the ground running.

“I was excited to be able to dive right in with field work. Within two or three days I started flying twinning surveys,” Westing said, referring to aerial surveys of moose that assess the proportion of maternal cows that have given birth to twins. Twinning surveys generate an index of habitat quality and population health.

“The data we’ve collected is consistent with the surveys Dave was doing going back to 2006,” said Westing. “We found that about fifty percent of the moose that had calves had twins, and that’s a good sign.”

Westing also completed deer pellet surveys with US Forest service staff. “The surveys definitely picked up the decline in the population following the big snow winter of 2011-2012. It’s basically, the lowest data point we have.” Look for an upcoming Cordova Times article about that topic.. In the meantime, the new biologist says in addition to working with in the local advisory committee, her door is open.

“I am interested in talking with people about wildlife observations and ideas for the future,” said Westing. “The biggest constraint we have on our work is budgetary, but I always want to hear new ideas.”

Now Westing hopes the weather will allow her to conduct goat surveys. “Goat surveys are notoriously difficult to accomplish here due to weather and pilot availability. We haven’t been able to do any goat surveys since 2010. Hopefully, this year will be different.”

While Westing and Crowley did not overlap in Cordova, Westing was able to meet with Crowley briefly in March and says her predecessor is always a phone call away. She says the plan for now is to stay the course.

“I want to get my feet on the ground, understand the complexity of the issues. For now much of the emphasis will continue to be on moose management,” said Westing.

While the departure of Crowley and Sandy Nehl, who retired from ADF&G this past year, is a loss, Westing says the new team of Westing and Samantha Stevenson-Renner, program technician, is beneficial.

“It is bad to lose the wealth of knowledge that people like Sandy and Dave had, but a fresh perspective and new eyes are healthy. I appreciate the community’s help by being patient and spending time with me while we get to know each other.”

“With their support, our job is to collect data on the abundance and trajectory of wildlife populations and manage with a reasonable opportunity for sustainable harvest.”

Westing says in addition to looking forward to getting to know the community, she is an avid duck hunter, excited to be back in a community where salmonberries grow, and looks forward to hiking and kayaking.

“Every weekend since we’ve been here, we’ve been out on the trails,” said Westing. “We are enjoying the ease of getting out, especially with a small child. We’ve already bought a river boat and there is probably an ocean boat in our future.”

This article by Jennifer Gibbins first appeared in the Cordova Times and is reprinted with permission. She can be reached at editor@thecordovatimes.com