A Field Farewell
Wrapping up Summer in Alaska

Crewmember standing at the mouth of Thimbleberry Creek in Sitka, AK. Photo by Matt Kern

The moment has come that we all outwardly, jokingly hope for, but secretly dread: the end of field season. The time in which we must relinquish our identity as rugged, growling, crusty field staff who occasionally slink into the office to slowly perish over timesheets, and don our proper cubicle personas. Gone are the mornings of crawling into waders that smell like low tide in a hot dumpster. Past are the afternoons of dumping pine needles and twigs out of said waders, and looking on with a combination of surprise and pity as one of those “twigs” limps away to die under a nearby action packer.

This summer has flown by, propelled by countless sunny days that make fieldwork in southeast Alaska a pleasure. My desk is covered in a sediment of field memories: notebooks, photos, maps…several coffee mugs I forgot to wash before the season even started and are now leering at me mossily from their fortress of Tupperware. My GIS maps are veined with colorful lines charting the streams my crew and I have tracked. Many of these streams will be nominated for the Hall of Fame, the veritable Rolling Stone of fish habitat…The Anadromous Waters Catalog. Haines bears the tracks of several seasons; its massive watersheds an endless source of fieldwork. Sitka’s extensive trail system offered ease of access to the meandering tributaries of Starrigavan and Indian rivers. Petersburg’s Jurassic understory challenged us to our very cores, but the resulting updates to the catalog I’m anticipating to be rewarding. 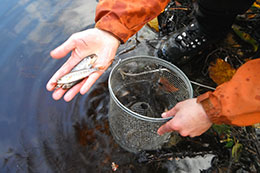 Often I wax poetic about the intensively introspective aspects of fieldwork, but documenting these tiny, behind-the-scenes streams is vastly important to Alaska’s natural resources. These streams and their tributaries act as capillaries, veins…arteries to the throbbing heart that is Alaska’s fishing industry. Big fighters the size of the chrome bumper on a ’53 Chevy get all the barstool fish story glory, but those fish had to come from somewhere, and it is important to ensure that they will always have someplace to start. I have met numerous local folks who are astounded to find that the roadside ditch in front of their house is wriggling with rearing salmon. I have also encountered salty old sourdoughs who want nothing more than to tell me about coming up to Alaska, meeting the land, taming their lovely wife, and “What? Fish in this crick? Nah, never been any fish up here. Cain’t make it past the falls. But lemme tell ya, this here was logged back in nineteen-fifty…forty…shoot. Cain’t remember a dang thing…anyway…” I love these conversations, and as often as they are entertaining, they are insightful as well.

A resource becomes such when it encounters the human factor. In essence, we do not so much manage the resource as manage the access to it. People have cultivated a lifestyle around fish in Alaska, using documentation methods from rhythmic, lumbering fish wheels to channeled weirs to squawking backpack electrofishers. We capture this resource with nets draped from boats and lines baited with hooks and herring. We see everything from generations-old fish camps draped with thousands of slabs of drying salmon, to Big Chief electric smokehouses expelling the delicious aroma of alder, apple, and Sweetheart sockeye. As our means of studying salmon and subsisting on salmon changes, the thrill and necessity does not. Charter fishing boats sell to outsiders the glossy bragging rights of hooking a massive Alaska salmon, commercial fishermen spill blood, sweat, and tears to gratify the global palate, and government agencies monitor the catch to maintain sustainability. 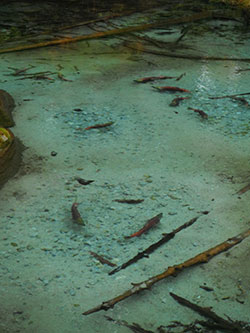 It is my hope that the cataloging my crew does continues to strengthen that heartbeat, and bolster the pride that salmon are indeed in our backyards…they’re just small and harder to see. Give ‘em a couple of years…that ’53 Chevy bumper will be dancing on your line like hillbilly boots at a hoedown.

Tess Quinn is a Fish and Wildlife field technician for the Habitat division, and documents anadromous fish streams to update the Anadromous Waters Catalog. As a salmon ambassador she does her best to represent anadromous fish and the upper extent of their habitats.