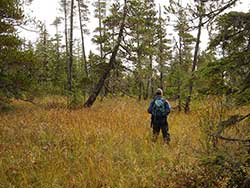 Deer hunters in Southeast Alaska are looking at a more promising season this fall.

That pretty much sums it up for this year’s deer hunting season, which officially opened for bucks in Unit 1C on Thursday, Aug. 1. Unit 1C encompasses Douglas and Shelter islands, as well as the Juneau mainland and some surrounding areas. The season opened Aug. 1 on Admiralty, Baranof and Chichagof islands as well (Unit 4, known as the "ABC islands") and most of southern Southeast as well. Hunting is for bucks only until mid-September.

Deer season opens Oct. 15 on Mitkof, Woewodski, and Butterworth islands, and part of Kupreanof island, in the Petersburg area of central Southeast Alaska – check the regulations for more details.

Scott said the positive outlook is based on spring deer pellet surveys conducted in April and May, as well as from anecdotal information and direct observations.

The pellet surveys, he said, don’t give a total population number, but since the surveys have been conducted for so many years, it’s easy to identify trends.

“The pellet surveys indicate that the pellet densities — the number of pellet groups, or pellets we find along line transects — are increased from last year, which suggests we didn’t have a big die-off or anything.” 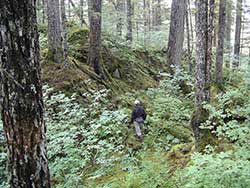 Deer hunting in summer in Southeast Alaska means trekking through the lush, dense rainforest in search of deer, or heading up to the open alpine above treeline. Riley Woodford photo

“I wouldn’t categorize it as a deer behind every tree but folks, I anticipate, will enjoy a very good hunting season,” Scott said.

On the mainland, Scott said the department knows less about what is going on.

“I would guess it’s the same, probably,” Scott said. “There’s not a lot of hunter effort on the mainland, but those folks who put in the time, generally, are rewarded for that effort.”

Scott said the Department is working on a process to estimate the number of deer in an area by using DNA collected from the deer pellets.

“That has been done over on northeast Chichagof and is now being done by Petersburg and Ketchikan,” he said, “and once that process is refined we’ll likely bring it here.”

There’s a good chance the research will start on Douglas.

“That will definitely give us an actual number of deer that we’re working with,” Scott said.

On Sunday, Sept. 15, the season will open to any deer (on the ABC islands, and Douglas and Shelter islands, but not on the mainland, where it stays bucks-only all season) for a total bag limit of four deer. While it is legal to shoot does and young deer after Sept. 15, according to the regulations, some hunters prefer not to shoot does. 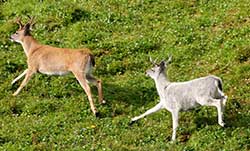 “In the majority of places, if you concentrate your harvest on bucks, you preserve that reproductive portion of the herd,” Scott said. “When it comes to ungulates, it doesn’t take that many bucks to actually breed several does.”

There’s always the question: “Can you drive the buck numbers down low enough that you don’t get good, successful breeding? And, the answer is you probably can, but it would be very hard in Southeast Alaska, based on the terrain, vegetation and places that people just don’t go,” Scott said.

Those areas serve as a refugium for bucks, he said, and the female deer will move in and out of those areas as well.

“By and large, I think things are looking pretty good,” Scott said. “And, I think hunters really will enjoy their season.”

This article was reprinted from the Juneau Empire and is used with permission. Abby Lowell is the Empire's outdoors editor.