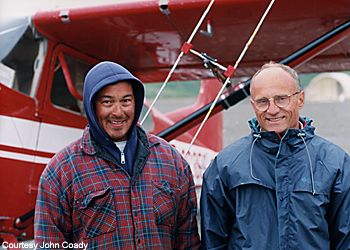 John Coady (right) and a friend. Coady - pilot, biologist and administrator - is retiring this month after 32 years with Fish and Game.

John Coady spent much of the past month in an airplane, flying over caribou in Northwest Alaska. Coady a pilot, biologist, and administrator wraps up 32 years of service to Fish and Game this summer. It's fitting that caribou and piloting make up his last weeks with the Department.

Caribou, especially the large Western Arctic Herd, have been a big part of John Coady's world for the past three decades. He's seen migrating caribou envelope entire herds of reindeer domestic caribou - and completely assimilate the reindeer herder's stock. He's watched the natural cycles of population decline and increase first hand. When he started with Fish and Game in 1971 the herd had declined to about 75,000 animals. Since then he's seen it rebuild to a high of about 463,000 caribou, probably the herd's maximum size, he said.

The Western Arctic Caribou Herd is the most important subsistence resource in Northwest Alaska, and people from Barrow to Bethel depend on the animals. People also come from all over the state, and the country, to hunt, photograph and watch these caribou as well.

"It's especially important to me as spectacular wildlife," he said. "Imagine viewing literally hundreds of thousands of caribou at one time. Where else can you see that?"

Alaska Fish and Game conducts extensive surveys of caribou during calving season on the Western North Slope, and conducts a major photo census of the Western Arctic Caribou Herd every three years to keep tabs on the population. Over the years, Coady has consistently kept his hand in the fieldwork, as a pilot and biologist. He's helped to advance the science of studying caribou over the years as well, from the first primitive radio collars in the late 1960s to the effective devices used today.

"We have 100-plus animals with radio collars," he said. "One of the major purposes of putting radio collars on is to help us find the group of caribou. If one has a collar and we can locate him, chances are he's with several thousand, or tens of thousands, of his buddies."

Coady has watched the evolution of helicopter darting, capture and radio collaring of large animals, and he's impressed with a new technique developed by Alaska scientists working with the Western Arctic Herd. It's easy on the budget, uses no helicopters, no drugs, and doesn't separate calves from their mothers.

"They catch them when they're swimming," he said. "They wait on the bank at caribou crossings, and when they get mid-stream they dash out and hold one by the antlers, keep it in the water then (attach) the collar to the animal, take a blood sample, and turn it loose. The whole process takes three minutes."

Coady said the river boat technique is much less stressful for the animals than darting, and local folks who eat caribou appreciate that tranquilizing drugs are not being injected into the animals.

Coady's first work in Alaska was not with caribou but moose. Coady came to Alaska from graduate school in Iowa City in 1967 to study at the Institute of Arctic Biology. In the dead of winter in 1971 he began working as a moose researcher for Fish and Game in Fairbanks, and the first months on the job were not pretty.

"It was a winter of very deep snow and Fairbanks was flooded with moose that had come into town - they were causing fits - dying in driveways, blocking cars, these were aggressive and hostile animals," he said. "My first year on the job I was hazing moose and picking up carcasses."

He spent a decade in Fairbanks, then moved to Nome in 1981 for a 10-year stay as regional supervisor there. He returned to Fairbanks in 1991 in the same position, a job he's held for 22 years. Being an administrator, pilot and biologist has been a wonderful combination, he said.

"It allows me to be a part of projects and usefully contribute," he said. "It also provides a chance for me to see first hand and be involved in the work." 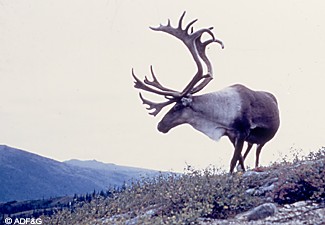 Caribou have been a major part of John Coady's work over the past three decades.

Working side by side with other biologists in the field and in the air is a rare luxury for a regional supervisor.

"It's amazing to have someone at John's level who is still in the field," said Jim Dau, a biologist in Nome who is also a pilot. "We've flown together 15 consecutive years. He's as good as any professional, commercial pilot who does nothing but fly for a living. We're really going to miss John in a lot of ways, and one is as a great pilot."

Dau said that while Coady may have strong feelings and opinions on management issues, he's able to work diplomatically in the areas of biology that deal with people and not animals. Coady calls it the sociology of wildlife management, and it's the hard part of the job. It's more than being a good listener and articulate speaker, Dau said.

"A lot of where John's strengths come from is that people realize he's a really good wildlife biologist," Dau said. "People respond to his integrity and intellect. He's not just a smooth talker who is good with people. To wield influence you have to have more than that - and Coady does."

Coady is most pleased with a resource management practice he's worked on that addresses the sociology of management - a coalition of stakeholders to manage the Western Arctic Herd. Established in the mid-1990s, the Working Group is made up of representatives from villages in the herd's range, sport hunters, guides, air taxi businesses and reindeer herders.

"It's developed into a wonderful model of public involvement in resource management," Coady said. "The beauty of it is this allows different interests to come together to talk about issues, debate, argue and sort things out, then reach agreement by consensus, then come to the Board of Game or the Federal Subsistence Board with a single voice. One loud, very influential voice."

Coady's work has made a significant difference in the attitudes of the diverse people who care about wildlife, said biologist John Trent. Trent served as the area biologist in Barrow before moving to Anchorage, and has known Coady since the early 1970s.

"Coady demonstrated during his watch that people from rural Alaska and people from more urban Alaska can work together for the betterment of wildlife," he said "The Western Arctic Caribou Herd Working Group is a good example of that. Instead of there being confrontations and division, John has managed, with his particular style, to build confidence between the department and the public, so we work together. When I started I remember a landscape of public resistance in rural Alaska, and that has really lessened."

"I can go into any community between Barrow and Bethel and I always see a lot of friends. People smile when they see you on the streets - it's okay to disagree on wildlife management issues, and we do - but the atmosphere of suspicion has diminished."

Coady has mixed feelings about leaving what he calls "The best job in the world." Fairbanks will continue to be home, but for the rest of the summer, Mongolia is calling, and he plans to head to Asia.

"The family is going to Mongolia for a month," he said. "My youngest daughter is there for a four-month study program and I've always wanted to go."

Coady said he will continue to spend time flying, not just his Cessna 180, but soaring in gliders.

"I want to keep a hand in work," he said. "Maybe they'll occasionally hire me back and let me fly for them."