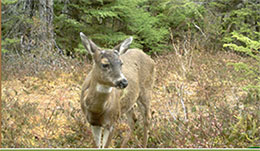 A Sitka black-tailed deer captured by a trail camera.

Gotcha! The camera takes three quick pictures as a mysterious visitor passes. The images are stored on a memory card in the trail camera - on loan from the Anchorage Fish and Game office.

The camera was set by students at Trailside Elementary School in Anchorage in a natural area near the school. Their curiosity piqued by tracks in the snow, they hoped the camera could answer some questions: “Who was here! Why were they here? Where were they going? Are they still here?”

Using infra-red motion sensor triggered digital cameras and computers, today’s students embrace the technology as a means of answering some of those burning questions.

Alaska Department of Fish and Game’s Wildlife Education Program and the U.S. Fish & Wildlife Service have partnered to make several trail camera packages available to schools across the state. Steve Brockmann, Deputy Field Supervisor of USFWS, first introduced the idea of providing loaner trail cameras to the public during the annual Southeast Bioblitz, a community-wide event aimed at getting people, particularly children and families, outside and engaged with the natural environment. Brockmann and Kristen Romanoff, ADF&G Education Program Coordinator, recognized the value of making these cameras available to schools. There are now four kits available for loan to schools and youth groups.

The goal is to help students become better connected with the natural world through discoveries in their own backyards. Before they set up the cameras, students ask questions about the habitat of their area using the inquiry process emphasized through Science, Technology, Engineering and Math (STEM) concepts.

Trail cameras are used by biologists and technicians at ADF&G at live traps and denning sites to document bears, wolverines and other species in remote locations. Hunters use trail cameras to identify game and sites for hunting. The cameras are popular with wildlife viewers who enjoy capturing images of the variety of animals that cross their camera’s beam – sometimes known as “camera trapping.”

One could certainly set up the cameras and hope that some animal, any animal, might pass by. But students improve their odds using the same techniques as hunters and researchers. Through an activity guide developed by the USFWS and supporting lessons from ADF&G’s own Alaska Wildlife Curriculum, teachers can prompt students by helping them identify signs of animal activity such as trails, middens, leftover food sources, tracks, fur and the ever popular ‘scat’.

Teachers can develop more sophisticated lesson with older students, having them create science notebooks to record the data related to the cameras such as GPS coordinates, the camera ID, time, location and a habitat description for each site. Once the cameras have been deployed and checked, students can be charged with downloading the memory card and inventorying its contents, graphing animal activity, and mapping their photos. They can share the data as well as the images on a website created just for this use, and contribute their findings to a nationwide database.

Mark Miner’s fifth/sixth grade class at Trailside Elementary School in Anchorage ‘test drove’ the Anchorage Critter Cam Kit early on to help address possible questions other teachers or the students may have when using the kits. Miner’s students take their lessons outdoors, using a natural area on the school grounds called The Living Classroom. The students found signs of a moose, so they set up the cameras to see if they could capture an image. They also set up the cameras to monitor a bird feeder.

“I was hoping to capture a picture of a moose but we didn't have any luck,” Miner said. “We did get some great shots of our resident squirrel and the kids named him Pumpkin. We also have a good photo of a chickadee.”

Not finding what you were looking for is a part of the learning process. Teachers can check out the camera kit for up to two weeks, providing enough time to adjust the position of the cameras, to try different locations, or test a hypothesis generated by the students.

“The cameras can get kids excited to be outdoors, which is huge benefit in my mind,” Miner said. “If they’re lucky enough to capture some pictures of a wide variety of animals the activity can spur kids to create and write interesting stories or poems.” 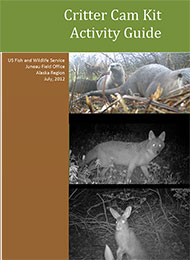 More and more schools around Alaska are engaging in their school yards by creating habitats for wildlife or taking advantage of adjacent lands as part of their commitment to getting students outside on a regular basis. Alaska offers one of the country’s most diverse classrooms, and trail cameras are a great tool to develop problem solving skills and inspire them to learn about and value their own backyard. Miner’s comments also show how using the images from trail cameras can lead to introducing other types of technology for digital storytelling and employing a multitude of disciplines such as language arts, math and social studies.

Miner’s class has signed up to use the cameras again in the early fall to test their effectiveness in viewing wildlife in another season. Hopefully, they’ll have better luck capturing images of their elusive moose, or the black bear that was seen in the area last fall. Now that would be a candid discovery!

Teachers can contact the Fairbanks, Anchorage and Juneau offices to reserve the cameras for use in their classrooms. To check out a Critter Cam Kit contact the office in your area:

In Anchorage or in Rural Communities: ADF&G Wildlife Education & Outreach Office at (907) 267-2216 or email: brenda.duty@alaska.gov

A trail camera photo gallery, an overview of kit contents, and academic activities can be viewed on the USFWS website.

Brenda Duty is the Project WILD/Youth Education Coordinator for the Alaska Department of Fish and Game’s Wildlife Conservation Division and is based in Anchorage.