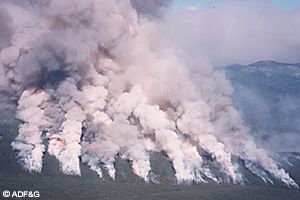 "We've planned this fire since 1995 and we're sure hoping to have it happen," said Paragi, a wildlife biologist with the Alaska Department of Fish and Game in Fairbanks.

The fire slated for the Tanana Flats near Fairbanks is a prescribed burn, a carefully planned and executed operation to enhance wildlife habitat. Moose and grouse flourish in the fertile environment of regeneration that follows a fire. Snowshoe hares, voles and other small mammals also thrive, benefiting predators such as raptors and marten.

Fire is a complex issue, and prescribed burning has its risks - that's why Paragi and his colleagues have been waiting since 1995 to implement this burn. Temperature, fuels, moisture levels, wind speed and direction, and weather forecast must be just right, and trained crews must be in place. Mid-July to mid-August is the preferred time, and Paragi is ready.

"The department does prescribed burns to enhance habitat, mostly around areas of human habitation--partly because these are areas where fire has been suppressed," Paragi said.

Fire suppression was the policy for decades. To protect timber resources and private property, fires were aggressively suppressed throughout the American West, including Alaska. But fire plays an important role in northern forests and can be a valuable tool for managing forests and wildlife. These days, in addition to planned prescribed burns, natural fires are shaped and managed not only to protect property but for habitat benefits.

"People are bombarded with the negative aspects of fire," Paragi said. "You hear terms like 'destroyed thousands of acres of forest,' and the thought of destruction gets embedded in the public mind. But fire is a natural part of the ecosystem and it is actually very important."

Lightning strikes ignite about 200 fires a year in Alaska, and lightning has started fires in the boreal forests for tens of thousands of years. Mike Taras, a wildlife educator with the Alaska Department of Fish and Game, said historically, these fires burned an estimated 1.5 to 2-million acres of Alaska forest each year - about one percent of Interior Alaska. 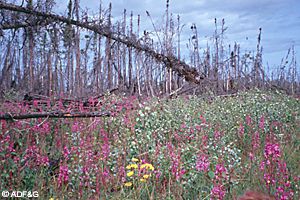 Fireweed and other plants flourish in the habitat created by fires.

The boreal forest has adapted--and even come to depend--on fire. Black spruce, which dominates the northern forest, is fire-adapted: the cones open and disperse seeds more readily and to a greater degree following a fire.

In a mature or late-succession black spruce forest, these evergreens create a canopy that substantially decreases the amount of sunlight reaching the ground. Many deciduous plants cannot grow in this shady environment, but some, like moss, thrive. Moss insulates the soil, inhibiting spring and summer thawing and making it even more inhospitable for most trees. Fallen needles further insulate the soil, slowing decomposition. Nutrients are locked up.

"Productivity is low," Paragi said. "On cold, wet sites you see black spruce trees the diameter of your wrist that are a couple hundred years old."

Fire opens up the forest canopy and allows sunlight to reach the ground, stimulating the organisms that decompose organic matter and make nutrients available to plants. Fire burns off the insulating layer of moss and duff, allowing sunlight to further warm the soil. The ash can release nutrients back into the soil and change soil chemistry, promoting plants growth.

"Fire burns away the older vegetation and allows new plants to establish, and that's where moose get most of their food," Paragi said. "They feed on fireweed, willow, birch, aspen and other new vegetation that comes up after a fire. Aspen stands are especially good for ruffed grouse. Aspen is one of the quickest trees to respond with new shoots after a fire. Berries can also do well on the sites where fire has occurred."

Good habitat for wildlife depends on what doesn't burn as well as what does. A forest that is a mix of different age stands has greater biodiversity. Tracts of mature black spruce are broken up by stands of willow, birch, aspen and other deciduous plants. Some species may thrive in one habitat type, others use different habitats for different reasons. Willows that moose like to eat are abundant in recently burned areas, while stands of older white spruce along rivers provide cover and shelter in winter. 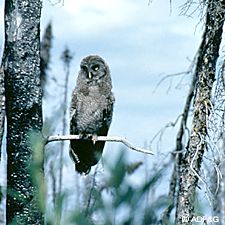 A great gray owl roosts in a standing snag amid charred trees. Voles and other small mammals can flourish in the environment of regrowth that follows a fire, which benefits predators such as raptors and marten.

"A fire is usually reported to have a perimeter of so many acres, and often reports will say a fire destroyed so many thousand acres," Paragi said. "But within that are wet areas, stands of deciduous trees and sites that did not burn, so it is not just a blackened wasteland."

In the summer of 2001, Fairbanks residents watched thousands of acres burn across the Tanana River in the Survey Line Fire. Just two months after that fire, willows had sprouted and grown waist high in wetter areas.

"Morel mushrooms really flourished after that fire, and commercial and recreational pickers were very active out there in 2002," Paragi said.

The prescribed burn planned for the Tanana Flats this summer is adjacent to the 2001 Fish Creek Burn, just southwest of the Survey Line Fire. Paragi and state forest managers hope to burn a total of 100,000 acres in the 1.4 million-acre region over a five-year period to enhance habitat for moose.

Fish and Game uses fire to enhance habitat, but prescribed burns are also done in some areas in the lower 48 to decrease the buildup of fuel in the forest, minimizing the risk of extremely hot, fast moving forest fires. Recent burns also serve as natural fire breaks, slowing the spread of fire and reducing its intensity.

Forest managers understand that fire in the short term may not be "good" for an individual tree or animal, but fire has a place in the ecosystem, and the natural cycle of burning perpetuates a mixture of old and young forest types--and wildlife thrives. For this reason, firefighting now focuses on protecting homes and other human values from wildland fires rather than on suppression of all fires.