Counting Wolves on Prince of Wales 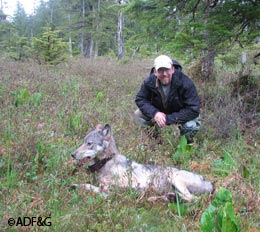 State wildlife biologist Kris Larson releases a Prince of Wales wolf that's been equipped with a GPS collar. The movements and activities of seven collared wolves will be compared with the hair snaring data to fine tune the techniques.

Prince of Wales is home to wolves and state wildlife biologists are trying to learn how many wolves roam the dense rainforests of the island. A new method is showing promise - and it works in the dark, without the wolves even knowing they've been "counted".

The largest island in Southeast Alaska, Prince of Wales (commonly known as POW) also has plenty of black bears, and one technique that’s been used there to estimate bear numbers is hair snaring. Biologists put strands of barbed wire along salmon streams, and as bears visited the streams to fish, the barbs snagged tufts of hair. The hair follicle contains DNA, revealing the sex of the bear and identifying it as a specific individual. The hair snares are checked and cleaned regularly over time, and using a technique known as mark-recapture, biologists are able to estimate the number of bears in the area.

Last fall, state wildlife biologists used a similar method that shows promise for assessing wolf numbers in a roughly 1,400 square kilometer area of central Prince of Wales Island. The “hair trapping” portion of the field work took place between Oct. 26 and Dec. 6, and this winter and spring they’ll complete other aspects of the project and work with the data.

“It’s noninvasive sampling, so every sample is a capture event,” said wildlife biologist Kris Larson with the Alaska Department of Fish and Game. “It’s nice - you don’t have to drug animals or risk hurting them or overly stressing them. The hair goes off to a lab and with any luck we get to enumerate the entire population. If it works, it’ll be much more cost effective than collaring and aerial surveys.”

A trail camera captures an image of a collared wolf rubbing on the hair trap.

A grid was established in the study area and 37 locations were chosen for hair snares. The wolf hair snares aren’t strands of wire across trails; instead, short strands of barbed wire are attached to flat boards nine by six inches across to create hair traps. The boards are spiked into the ground and baited with a few drops of a musky scent lure that the wolves love to roll in. Five hair traps were places at each of the 37 locations. Traps were checked and cleaned every ten days.

“We’d pick the hair out as well as we could - any hair with a follicle has got what you need,” Larson said. “Then we’d burn it off with a little propane torch, and sprinkle a little more lure on to freshen it up.”

Larson said 74 samples were collected. “We ended up with samples from unknowns species too, mixed in,” he said. “Probably ten or so of those came from bears, and maybe dogs and marten. Deer too - they don’t rub, but they dig at it and sniff at the boards. Everything likes the set.”

Larson knows this because 10 trail cameras were set up to monitor activity at the trap sites. The DNA will identify the species as well, but he has pictures of deer, black bear and even otters investigating the sets. The camera images help biologists better estimate how many wolves were moving through the area, and to improve their techniques.

“In one instance we had three events where wolves hit the boards before we returned,” Larson said. “We had a 10-day span before we came back and checked, and without the camera all we would have known is that they had gotten hit.” 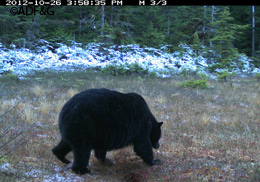 “It was a pleasant surprise to see how successful it turned out. The wolves were very cooperative and the cameras were good at capturing them without disturbing them.”

Because this project is a test of a new method, the biologists also collared wolves. Seven wolves were live captured using padded leg hold traps and equipped with GPS collars. The animals’ locations were logged every four hours, and twice each week the biologists were able to remotely download the data from the collars.

“We followed them around and counted them, so we have a known,” Larson said. “Then we can compare the results. If it turns out to be accurate we could have a technique that could be used all over Southeast Alaska.”

Another source of information will be surveys conducted by the ADF&G Subsistence Division to obtain local knowledge about wolves from experienced wolf harvesters. Other collaborators include state wildlife biologist Dave Person, and Ray Slayton and Brian Logan from the Forest Service.

“Ray Slayton has been a huge help, he always brings so much excitement to a project,” Larson said.

A variety of images captured by the trail cameras during the field work for this project can be seen at the ADF&G trail camera gallery under “Prince of Wales Wolf Research.”

Riley Woodford is the editor of Alaska Fish and Wildlife News and produces the "Sounds Wild" radio program.