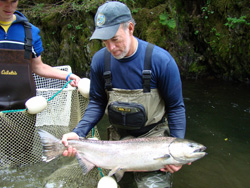 Anglers on Kodiak Island have an affordable option for catching Chinook salmon, thanks to an enhancement project being conducted jointly by the Alaska Department of Fish and Game (ADF&G) and the Kodiak Regional Aquaculture Association (KRAA). Since 2001 the department and KRAA have annually released Chinook smolt for subsequent return to freshwaters along the Kodiak road system where anglers have access to fishing. Other Kodiak Chinook salmon sport fishing in occurs in marine water surrounding the island and also on the Karluk and Ayakulik rivers, the only two Kodiak drainages supporting native runs of the state’s highly coveted sport fish. Both drainages are remotely located on the Southwest end of the island and are relatively expensive for anglers to access. Saltwater fishing for Chinook off Kodiak’s shores is highly productive, but requires personal investment in a suitable vessel or the cost of procuring the services of a local chartered vessel guide. Results from the current enhancement project have not only created additional Chinook sport fishing opportunity in freshwaters, but have also augmented the local abundance of fish available to anglers in the marine waters fishery.

The history of developing a return of Chinook salmon on the road system dates back many years, and was first attempted by ADF&G from 1976-1981. Chignik River Chinook salmon were used as the brood stock and fingerlings were released in the Pasagshak River drainage. Subsequent small returns failed to generate a sport fishery and the project was eventually cancelled.

Chinook salmon enhancement again became a priority in 1983 when the Kodiak Comprehensive Salmon Plan (1982-2002) identified Chinook salmon as a preferred enhancement species for road system anglers. Consequently, a second attempt occurred from 1989 – 1996, when Chinook salmon smolt of Susitna River origin were reared at the ADF&G hatchery at Elemendorf Air Force Base, transported to Kodiak via truck/ferry/barge and released into Island Lake (1989-94) and the Buskin River (1995-96). Poor returns to Mill Bay (Island Lake fish) and departmental permitting problems at Buskin again failed to generate a sport fishery and the project was ultimately terminated. 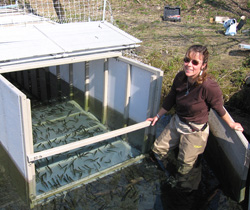 In response to a large amount of public support within the community, in 1999 ADF&G regrouped and working with the Kodiak Regional Aquaculture Association (KRAA), initiated a third road system enhancement project. Based on what was learned during previous efforts at Pasagshak and Island Lake, changes were made so that the project would have better odds for success, including use of a local brood stock (Karluk River), release of larger smolt-sized fish (up to 20 grams) instead of smaller fingerlings, and rearing fish at a local hatchery to help reduce mortality associated with transporting smolt from Anchorage.

From 2000 to 2004 ADF&G collected Chinook salmon eggs and sperm from the Karluk River run. The eggs were flown to KRAA’s Pillar Creek Hatchery on the Kodiak road system where they were subsequently fertilized, incubated and hatched, and the juvenile offspring reared to smolt size. From egg fertilization to the release of Chinook salmon smolt takes about one year and nine months.

Since 2002 ADF&G has imprinted and released Chinook smolt into Monashka Creek each May. After three to five years at sea, these smolt return to the creek as adult Chinook salmon ready to enter their spawning phase. The adults that make it back to tiny Monashka Creek in mid June through early July are collected and held in captivity for almost two months as they ripen for spawning. Ripening the fish is often a particularly challenging task as they must be kept safe from otters, bears, people, floods and droughts. By mid-August the fish are fully ripe, at which time they are spawned and fertilized on site by KRAA hatchery staff. Because fish can be spawned on location and immediately placed in hatchery facilities, very high egg survival rates have been achieved. 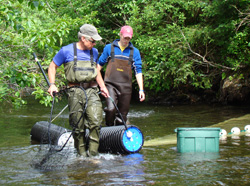 In 2005 ADF&G formalized a cooperative agreement with KRAA to fertilize Chinook salmon eggs, incubate and rear them to smolt size. The current production goal of the agreement is to produce 200,000 Chinook smolt up to 15 grams in size. Following installation of rearing raceways at the Monashka Reservoir in 2006 which expanded production capacity for the project, the addition of release sites at the American and Olds Rivers increased the locations anglers can catch Chinook salmon on the road system. All of the funds paid by ADF&G to KRAA for producing the Chinook salmon smolt come from the sale of sport fishing licenses and federal Sport Fish Restoration Program funds. The current cooperative agreement annually pays KRAA $80,000, not only to produce 200,000 Chinook smolt, but also approximately 84,000 coho salmon fingerlings (which produce returns at Mission and Mill Bay beaches) and up to 78,000 rainbow trout fingerlings (which are released in 18 road system lakes).

Accounting for small number of males and females needed to supply eggs for the hatchery to continue the project, current road system Chinook returns annually produce as many as 2,000 fish available for harvest. Although some returning adults may spawn naturally in Monashka, American and the Olds rivers, it’s unlikely many of their offspring will survive to adult stage. Chinook salmon typically thrive in larger streams, such as the Karluk and Ayakulik rivers, where Kodiak Island’s only natural returns occur.

After three attempts over 35 years, the goal of having a large Chinook salmon return to the Kodiak road system is finally being realized. Success of the current project has been dependent upon not only the efforts of ADF&G and KRAA, but also a large amount of assistance from Kodiak’s local government and longstanding public support.