A Bear Viewing Area is Born 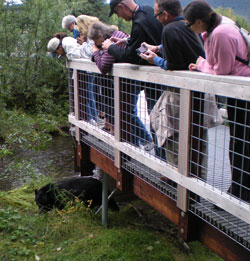 On a late summer day in Juneau near the Mendenhall Glacier Visitor Center, a scrum of excited tourists is pressed against a fence jostling to view a black bear sow and cubs moving slowly through the brush below. Cameras and cell phones at the ready, they ignore the incessant barking of a dog in a nearby pick-up truck and the toddler staggering through their forest of legs—even as he grabs the fence and screams.

“Whose child is this?” asks a ranger sharply. A gray-haired man with a big camera and an empty stroller grudgingly peels his attention away from the bears, acknowledges the child and plops him back into the stroller.

Laurie Ferguson Craig, the center’s head naturalist, has noticed an interesting phenomenon when people get behind a camera. “They don’t pay attention to anything else, they are so intent. They might slip down a hill or knock someone over. There are just an awful lot of things that can happen,” she said. “It’s one of our ongoing challenges to be sure we have enough people here to help.”

The prospect of visitors tumbling into bear habitat was not an issue on anyone’s mind fifty years ago when the US Forest Service built its visitor center on a prominent rocky perch. Sparse vegetation was only beginning to feather the surrounding rubble left by the retreating ice and Steep Creek burbled along open gravel beds.

Black bears that crossed this barren stretch to reach the forested mountainsides beyond no doubt did so with some trepidation and did not linger. But over the years the rocky landscape softened into mossy woodland, Steep Creek was enveloped in a tangle of alder, cottonwood and fern, and bear sightings became increasingly common.

“When they started showing up in 2001 or 2002, we’d go, ‘Oh my gosh, there goes a bear,’” said Ron Marvin, center director until his retirement in November. If a bear was asleep on the stairs, staff would cordon them off and take the elevator. If it was ambling along a sidewalk, people would take to the street. That is until 2004, Marvin said, “when a biologist at the regional office said, ‘Wait a minute, I think you’ve got a wildlife viewing area.’”

That light bulb moment shone feebly at first but slowly the Forest Service began to revisit how it manages bear/human interactions at the glacier and take steps to adapt what was never intended to be a bear viewing area into something approaching just that. Even so, the area’s heavy human traffic, its semi-urban bears and platforms built to view an entirely different species has led regional ADF&G biologist Neil Barten to reflect that Steep Creek may be “the most challenging bear viewing area in the state.”

Some 400,000 people visit Mendenhall Glacier every year—as many as 5,000 a day at the height of the summer season. While the Forest Service doesn’t promote Steep Creek as a bear viewing area, many tourists come looking for bears, often prompted by tour bus operators on the way in. Most have only an hour before the bus leaves and the sense of urgency can be palpable. When word spreads of an approaching bear, the crowds congeal, clogging pinch points like the intersections and staircases of the elevated walkways.

A handful of rangers try to maintain an orderly flow, keep crowds calm and bears undisturbed, and allow for those moments that make it all worthwhile.

“It requires constant vigilance to maintain a certain behavior with people but the rewards are so high,” said Craig. “You can have a hundred people out there watching a bear. If it’s a mom, she may be comfortable enough to roll on her back and nurse her cubs. We’ve had people turn to us with tears in their eyes. That’s how much the experience means to them.”

At first glance, the Steep Creek facilities appear ideal for watching bears. A viewing platform next to the parking lot overlooks a section of creek where black bears fish for reds. An elevated walkway meanders through woods where they forage for ground cone and alder root and across meadows marked with bloody salmon remains and flattened vegetation where bears have been lounging.

But these wheelchair-accessible facilities built in 2004 were designed in the 1990s for salmon viewing instead, and they’ve had their drawbacks when it comes to bears. Still, Marvin said they were a step up from what had been narrow trails winding through the brush, cutting down on those up-close, adrenalin-heavy bear/human encounters that led to trail closures. They also allowed rangers to start delineating what is people space and what is bear space.

“A sidewalk, trail or parking lot is a people place and as long as the bears stay off it, they’re fine. If they don’t, we’ll haze them and they learn really fast,” said Marvin. Hazing included clapping and shouting, using an air horn, or in rare instances shooting the bears with a paint ball marker to produce a sting.

Other changes helped too. The Forest Service closed the back side of the Steep Creek Trail loop to avoid encircling bears with people trails and installed extra fencing and swinging gates to discourage bears from climbing up on the walkways. They also brought in a few expert volunteers to beef up staff and offer visitors the kind of natural history interpretation that rangers tasked with crowd control had little time for.

Craig has encouraged her staff to speak to visitors as they approach the platforms using their best ‘golf announcer’ voice. “It does a lot of interesting things,” she said. “It slows people down enough to listen and it gives a calm message to the bears. We give people a little orientation about what to expect and how to behave and we let them know what the expectations are.”

What was drawing bears to Steep Creek when there were plenty of other—tourist-free—salmon streams? Juneau author and photographer Bob Armstrong got an inkling of the answer in 2006 as he was gathering material for a book on the Mendenhall. He figured the best time to photograph bears was early morning before the mobs showed up.

“I’d go out there one to two hours before the busloads arrived when they weren’t being disturbed and I was real quiet. But it wasn’t until the area became pretty well crowded with tourists that I’d begin to see bears—and that happened quite a few times,” said Armstrong who also noted the predominance of females with cubs.

A population survey of the area in 2008 substantiated Armstrong’s observations. State fish and game biologists, in cooperation with the Forest Service, planted about a dozen snares made with bits of barbed wire to snag fur from passing bears. DNA testing of the samples showed 11 individual adults frequenting the area—all female, said Southeast area biologist Ryan Scott.

“You see this in a lot of other places where females and cubs will take advantage of a human presence,” he said. “We theorize that it’s because it’s safe (from male bears). Those big boars will kill cubs but they’re not comfortable around people.”

Abundant food was also a draw, including cottonwood trees. The forest had reached a stage of succession where the trees were both plentiful and just the right height for small and mid-size bears looking to snack on flowering catkins and young seed pods in the spring.

“Little bitty trees don’t have enough flowers and great big trees are hard to climb, but these are just perfect. The bears go right up the main axis and there are lots of branches they can reach out and get,” said expert volunteer and naturalist Mary Willson who did a study of the area trees. “This is just a ‘goodie’ place.”

Good plentiful food, protection from grumpy males, and only moderately pesky humans kept drawing the bruins back, generation after generation.

Southeast wildlife management coordinator Neil Barten wonders what other temptations are working on the bruins, however, and how that might affect their behavior at the glacier. In the evening after the rangers leave, local residents show up and a few have been reluctant to obey rules banning food and dogs on the creek trail. At least some of the bears also roam the dense neighborhoods nearby.

“Those bears, through their own bad luck, are potentially running into people in their back yards who may have dog food or a bird feeder out or may have visitors from Iowa and, well, maybe throw out a piece of toast because they want to get a picture,” said Barten. “You see a bear at the Mendenhall and you really don’t have any idea what messages that bear has been taught in the last 24 hours, let along in the past year.”

ADF&G has initiated a plan to collar about five Steep Creek bears to learn more about their movements throughout the valley. Forest Service Wilderness Manager John Neary said at first he strongly promoted the collaring for that reason but is starting to conclude that it doesn’t really matter.

“Bears are very adaptable. They have to survive lots of different threats in the neighborhoods and they get fairly wise figuring out how to tiptoe around people,” he said. “We hope that at the visitor center we can provide some kind of consistency so that when a bear arrives here, it says, ‘Oh this is easy, I can deal with this. There are a whole lot of people but they are all doing the same thing day after day.’”

Neary has applied his many years of experience managing the Pack Creek brown bear viewing area to studying the situation at Steep Creek, and he is convinced that establishment of a formal bear viewing area is long overdue. Given the success of their early efforts and some key changes in higher management, he is optimistic it will happen. He is working on a conceptual plan to modify the infrastructure, not just at Steep Creek but at other points in the trail system. The proposal includes some new fencing (electric even in one problem spot), an underpass at Photo Point and culverts that would help channel bear movements, leading them away from roads and people trails while still providing good viewing opportunities.

Neary said some sections of the elevated walkways would be dismantled and reassembled elsewhere so that the entire walkway is on one side of the creek. That would give space to bears that don’t want to be around people.

“If the walkways are staged along the creek, people can still get their bear viewing and salmon viewing and have a nice walking experience,” said Neary. “For those who want to access areas like the Moraine Ecology Trail, I would propose a new trailhead with access well away from the creek.”

Barten is supportive of the proposed changes and, like Neary, would like to see better back-up for center staff during the summer rush.

“For years, they didn’t get a lot of support from the district. It almost seemed like they (the ranger district) didn’t want to acknowledge what was going on. To their credit they are now making those changes but it’s been a little slow,” said Barten. “I think we’re really lucky these are black bears and very well-behaved black bears.”

Anne Sutton coordinates the Wildlife Viewing program for the Division of Wildlife Conservation.