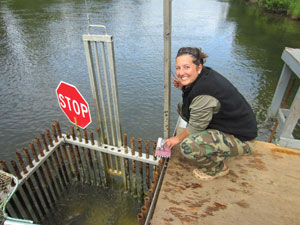 I had just come from a few weeks in field camp on the Nushagak River in Bristol Bay where there was no bathroom, no shower, no oven, no freezer, no heaters, no lights, short tents, cold, rainy, windy weather, and an hour long boat ride to camp to the field site that left you numb and soaked. Those were my exact expectations for the Little Susitna River weir field site where I would be working for the next two weeks counting and sampling coho salmon, while also counting any chum, Chinook, pink, and sockeye salmon that passed through a fish weir.

Fortunately, those expectations were wrong. I arrived at the ‘Little Su’ on a glorious sunny day with my campmate Kiche. To my joyful surprise, the ride to camp was only about twenty minutes, on a shallow, winding, beautiful river. Adding to this happiness, when we arrived in camp I immediately spied the outhouse that was fairly close to my new tent. When I went to check out my new quarters, I was even more ecstatic to find out that it was tall enough for me to stand in and even had a light! Peering into the corner of the tent, I discovered that it had been stocked with a buddy heater and something that looked like a small tennis racket. After a closer investigation, I was pleased to see that it was a bug zapper. It was a surge of relief to know I would finally be evenly matched against the unofficial Alaska state bird: the pesky mosquito! Just when I thought things couldn’t get any better, I walked into the spacious cook tent to find an oven and a large refrigerator freezer combo. The final icing to the cake was when Kiche told me that we would be building a shower, explaining that the Little Su field site had only been up and running for about a week, so there were still portions of camp that needed improvement.

Later, Kiche took me to get acquainted with the weir, as I had never seen one before and didn’t know what one looked like or how it functioned. Kiche explained that it was a fish trap and taught me how to work the cage that the salmon would swim through during my shift the next morning, as well as the boat gate that I would have to lower for anyone who wished to go upstream. I was to work the early shift from 5:00 a.m. to 2:00 p.m., while he was working the late shift from 3:00 p.m to 12:00 a.m. That night, I sat with Kiche for a couple of hours of his shift. I reflected back to my time on the Nushagak where I learned what chum, Chinook, and sockeye salmon looked like, after we had caught them in a net and I could see them up close. On the weir, I had to learn what each species of salmon looked like from above, merely by recognizing body shapes and distinct color patterns.

After watching a couple hundred salmon pass that night, I went to bed anxious for my solo debut. I could hardly sleep that night, dreaming about waking up late and miscounting fish. When my alarm went off at 4:30 a.m., all I could hear was the rattling of the weir as thousands of fish surged forward, trying to get through the bars in their fight to get to the spawning grounds. I dressed hurriedly, ate some cereal, and headed towards the weir. When I looked into the water right in front of the cage, it appeared to be alive. There was a writhing mass of fish waiting for me to open the door to their freedom. I plugged in my iPod, took in the beautiful sunrise and a deep breath, and opened the flood gates—literally. Fish began to pour through the cage. My finger was moving as fast as I could click the tally counter. Then, after about an hour, the whirlwind slowed back down. In order to halt the boredom that could have so easily crept in, I began to sing and dance for the fish, continuing to count until it seemed I had reached a stalemate. At this point, Kiche had awoken and it was time to call in the numbers. That first day I counted about 2,000 chum which was more fish than I had ever seen in my entire life, and throughout the week I would be witness to even more. 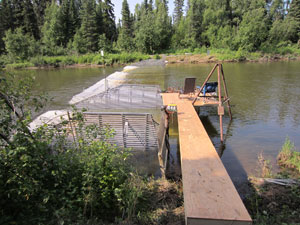 I learned so much in the week I spent with Kiche. He taught me how to identify five salmon species from above, where to take scale samples from coho salmon, how to clean the weir and not fall in, how to drive a boat (an experience we both lived through), how to run a drill and skill saw (we built multiple sets of stairs, as well as the shower), how to use a satellite phone, and how to deal with flood conditions on the weir. This being the first time truly cooking for myself, Kiche took me under his wing and introduced me to delicious fried bananas. I was really enjoying the laid back environment of weir life and hanging out with my new colleague, but still couldn’t wait for the shower to be built. In the meantime, I had gotten a little creative by washing my hair in the rain water that was pouring off a corner of my tent on one of the handful of wet days. I also washed it in the river on one of the gloriously sunny days. Since ADF&G techs work eight days on the weir and have six days off, I was excited and nervous because I knew the rest of the materials for the shower would be arriving but also that Kiche would be leaving.

After Kiche departed, I waited until my new colleagues arrived. I met Don and my new tent mate, Kiche’s younger sister, Kaasan. Kaasan and I hit it off right from the start. We were both excited to finally be working with another person of the same gender, and to top it off we were both put on the evening shift so I wouldn’t have to wake up so early any more. The next day a new recruit was dropped off at camp to be trained over the weekend. We had a full camp with four people, but it made for an excellent learning environment. In the previous week, coho didn’t really seem to be running with only one or two of them a day. This week, although we still were getting thousands of chums, we began to see some spikes of about twenty coho a day so we could finally sample fish. Kaasan was my instructor, teaching me how to net fish from the cage and re-teaching me how to take scale samples and measure the salmon.

During that second week, I got to handle several fish, a challenge I really enjoyed. Along with all the fish handling, I was able to improve my cooking skills: baking my first cake. I felt so self-sufficient! The shower was finally completed so I was able to take my first shower in twelve days, which was definitely a highlight of the trip. But most of all I enjoyed working and hanging out with my new friend, Kaasan. We would talk, laugh, sing, and dance even after our shift was over. When it was raining outside, we would sit in the cook tent playing cards and munching on snacks. And when it was nice outside, we would sun bathe out on the weir.

Living on the weir was an experience of a lifetime. I saw my fair share of salmon, including some massive, deep red Chinook salmon. I watched a family of merganser ducks and a plump beaver find their way over the metal bars barricading their river. I got creative with my showering habits. I learned some very important skills, like how to cook, drive a boat, and use power tools. But most importantly, I made wonderful friends and had enough fun to last me through the school year until I can go back to Alaska and out in the field again.

Emily Hepler is a student at Oregon State University and served in the summer of 2012 as a volunteer with the Alaska Department of Fish and Game's Sport Fish Division.