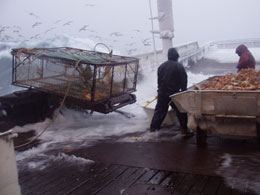 Fans of “The Deadliest Catch” are familiar with the rigors of the Alaskan snow crab fishery. The fishermen who make a living catching snow crab, Chionoecetes opilio, on the eastern Bering Sea work in a rugged environment. While the fishery for snow crab is open from October 15–May 15, fishing occurs primarily during winter, and weather conditions can be severe; the 100 plus-ft vessels regularly work in big seas with freezing spray and gale force winds, and struggle to retrieve pots ahead of advancing pack ice. Despite the rapidly shrinking sea ice extent in the summer in the Arctic Ocean, wintertime sea ice has plagued fisheries in the Bering Sea in recent winters to such an extent that record sea ice extent during the 2011/2012 fishery necessitated a two-week fishery extension.

The difficult weather and remoteness mean that excellent judgment, boat handling, and boat maintenance are required for success over the long haul. Fishing such an inhospitable location during the coldest, stormiest time of year might seem silly, but fishery timing is integrally linked to the crabs’ love life and method of growth. The winter fishery is intended to avoid disrupting molting of large males, which occurs in late spring or early summer, and to maximize yield from hardshell crab.

Snow crabs are also commercially fished in the waters of Atlantic Canada, Greenland, the Russian Far East, and northern Japan. Large, square pots baited with a smorgasbord of chopped herring or squid and “hanging bait” (whole cod or other oily fishes) are used to catch this tasty denizen of the deep.

Over the past 30 years the eastern Bering Sea snow crab fishery has been the largest crab fishery in Alaska, and for several years in the 1990s, the stock produced the largest harvests of any crustacean (crab, lobster, or shrimp) stock in the United States. However, well-known to those who harvest and manage crab fisheries in Alaska, crustacean stocks are notorious for undergoing large changes in abundance from year to year. Snow crab are no exception, the abundance of mature males and females declined by 50 percent between 1997 and 2000, resulting in a dramatic decrease in harvest. Making management more responsive to snow crab population trends requires a better understanding of their life history strategy.

The reproductive biology and life history strategy of snow crab are quite complex. Like all crustaceans, snow crab grow by shedding their shell, or “molting,” and adult snow crab undergo a final lifetime or “terminal” molt when they reach maturity. In females, this final molt generally occurs five to eight years after hatching and marks the beginning of their reproductive life. Expansion of the abdomen during this final molt to maturity creates a brood chamber where females carry their egg clutch outside the body for one to two years.

Female snow crab complete the molt to maturity over a wide range of sizes determined by interactions between growth, temperature, and life history. As females age after the final molt, their shells or exoskeletons become scratched, darken in color, and become home for other marine organisms, particularly barnacles. Differences in the degree of wear, coloration, and accumulation of colonizing organisms (epibionts) are used by biologists to assign a relative “shell condition” index to female snow crab. Females which have recently molted are identified as “newshell,” females with intermediate shell wear and accumulated epibionts are “oldshell,” and the index progresses to very, and then very, very oldshell for females with exoskeletons in poor condition. 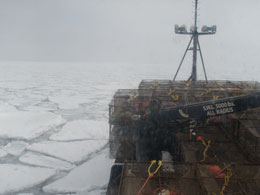 Another aspect of snow crab reproductive biology is the ability of females to store sperm for several years after mating, which allows them to produce viable egg clutches without mating within the current season. So, a large male crab providing the tasty meal on your plate can still be fathering offspring up to three years after your last bite! The “trick” is that sperm are stored in paired organs on the underside of the female, known as “spermathecae.” During mating males grasp females, abdomen to abdomen and sperm is transferred through the female’s gonopore into the spermathecae. The amount of sperm stored after production of the first egg clutch is directly related to the sex ratio during the mating period. When more male than female snow crab are present at the time of mating, females reproducing for the first time can attain sperm reserves greatly in excess of that required for fertilization of their first egg clutch. In crabs from eastern Canada, females were estimated to have acquired enough sperm (more than a billion) in a single mating season to fertilize clutches in several subsequent seasons. However, when females outnumber males, males will mate with multiple available females but give each of his female mates only a very small amount of sperm––a pattern known as “sperm economy.” In this case, the smaller amount of sperm will only fertilize a portion of an egg clutch, resulting in much fewer offspring. Examination of the sperm storage organs can reveal important differences in the amount of sperm stored and how recently the females have mated.

You might be thinking now, “All of this is interesting, but why do we care about the minutiae of the snow crab love life?” Well, the statistical population models used to determine annual catch levels of crab fisheries rely on balancing the relationship between the number or biomass (weight) of individuals removed from the population (i.e. through fishing, predation, disease), the number of young crab growing to adulthood, and the need to maintain the population at a level which will produce sufficient offspring to result in a stable population in the future. Due to an inadequate understanding of variability in the reproductive contribution of female crab, the current model uses information on male biomass only. However, it takes two to tango, as they say. Because the number of embryos reared by females provides the starting point for the number of young crab that will ultimately grow up to form the future parental stock, adopting an index of reproductive potential based on females could more accurately describe potential relationships between reproduction and population fluctuations, such as seen from 1997 to 2000. For snow crab, estimation of stock egg production is complicated by aspects of both the fishery and biology. First, since the fishery harvests only males, fewer offspring are expected if insufficient males are present at the time of mating to fertilize the eggs of all mature females. Second, the importance of female size and age in determining the number of embryos carried is not well understood. Third, since female egg clutch sizes are typically monitored during the summer assessment trawl surveys when embryos are in the early stages of development, there is concern that reproductive output might be being overestimated due to the subsequent death or loss of embryos during the incubation period, which varies from one to two years at warmer or colder temperatures, respectively. 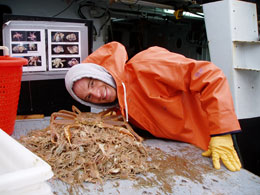 In response to these questions, Alaska Department of Fish and Game (ADF&G) biologists, in cooperation with faculty from the School of Fisheries and Ocean Science at the University of Alaska, and supported by a grant from the North Pacific Research Board (Project #714), initiated a multi-year study to advance knowledge of the reproductive biology of female snow crab in the eastern Bering Sea. This research program had three primary objectives:

To investigate these questions ADF&G biologists, with support from the National Marine Fisheries Service biologists and fisheries observers, collected over 1,000 female snow crab in spring and summer from 2007 to 2009. Scientists estimated the number of eggs carried by each female, determined whether eggs were viable, and evaluated differences in the sperm storage organ.

These data revealed several definitive patterns. Large females had greater numbers of embryos than small females; in fact the largest females carried nearly four times as many embryos as the smallest. The number of embryos was similar among newshell and oldshell crab but decreased dramatically for very, very oldshell females, who carried only one-half the number eggs carried by younger females. The number of embryos carried by females in the summer soon after mating and in the spring prior to hatching was similar, implying that embryo loss or mortality during development was low. Finally, old shell and very oldshell females that had relatively empty sperm storage organs, and/or lacked evidence of recent mating, carried fewer embryos than those who had these attributes. However, this difference was much less than the influence of female size and shell condition on fecundity.

Scientists are integrating the results of this study with historic data on the abundance of female snow crab and using ocean temperature records to predict shifts in the duration of the reproductive cycle with the final objective of estimating an index of annual egg production. Estimates of egg production by time period will then be compared with abundance of small crab several years later to determine whether variability in annual egg production is related to the dramatic changes in abundance observed for the snow crab stock. Ultimately, results will be used to alter the management strategy for setting annual catches to one that recognizes the role that female crab play in the process to sustain this valuable fishery for future generations. This study illustrates one aspect of the investigative research needed to advance knowledge for making better informed management decisions about Alaska’s valuable marine fishery resources.