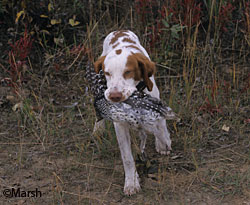 The setting seemed more Great Plains than Alaska: rusting farm machinery backlit by a fiery sunset, barley fields rippling in golden swaths, the horizon a living canvas of geese and sandhill cranes whirling in noisy flocks. Yet to the south a mountain range marched, and the September breeze fresh off the Arctic Circle blew brittle and permafrost-cold. Those subarctic clues left no doubt. The loam beneath my feet was a long, long way from North Dakota, Kansas or, really, anyplace else.

Awash in a mix of sunlight and long evening shadows, Sundance trotted out front, nose to the ground. A full day of hunting had taxed the little Brittany, though even now he remained alert for one final covey. I brought up the rear, shotgun over one shoulder, thighs worn out from miles of walking.

The day had been good. I’d found solitude and broad spaces to hunt, luxuries never far away from we who live and wing-shoot in Alaska. More to the point, I’d come seeking a prairie connection. And beyond the geese and cranes and sunsets over grain fields, I had found it in the wings of an unlikely grassland bird.

Not so long ago, just beyond the fringes of written history, interior Alaska was a vast prairie linked to the steppes, or grasslands, of Eurasia. That connection was lost about 11,000 years ago when the ice of the last glacial age, the Pleistocene, dissolved in a global warming trend and raised sea levels 300 feet or more.

Scientists who sift peats to collect and study pollens and silts accumulated over the eons tell us that, prior to the warming trend, interior Alaska was – even more than today – a land of extremes, a dry country of freezing winters and torrid summers. Meanwhile, more evidence gathered in Alaska and eastern Siberia points to the prehistoric existence of the Bering Land Bridge, a connection that once linked Eurasia and North America, providing ready passage for grassland animals and plants. In common to both continents are discoveries of bones, tusks and, on rare occasions, the bodies of Ice Age creatures deep-frozen in remarkable – even edible – condition.

Today the Interior is a massive basin drained by arterial rivers such as the Yukon, Tanana, and Nenana. The basin is cradled to the south by the Alaska Range and to the north by the Brooks Range, the northernmost extension of the Rocky Mountains. Travel into the high country on either side, where alpine valleys twist into remote box-canyons, and it is possible to feel you’ve stepped far back in time. Ice Age winds still moan through these places and, in your mind, they can resurrect the woolly mammoths, Pleistocene horses and steppe bison that once roamed here.

Ultimately, the Pleistocene’s end was marked by climatic changes and the land evolved accordingly. Shrubs and boreal forests began to appear and, over time, animals of the vanishing grasslands that could not adapt died out. Today, only remnant survivors persist. Moose, Dall sheep, and American bison (thought to be direct descendants of the steppe bison that moved south to populate the steppes – or Great Plains – of what is now the Lower 48) are examples of Pleistocene leftovers.

And so I had come to the Delta area east of Fairbanks, shotgun in hand and bird dog in tow, in search of an evolutionary holdout, a creature perhaps humbler than a bison, though to hard-bitten wing-shooters no less intriguing. I’d come to hunt a vestige bird, a prairie grouse whose origins can be traced to Alaska’s bygone steppes. Commonly associated with the fields and dry gullies of the American West, the bird I pursued was the sharp-tailed grouse.

In camp that night, I watched Sundance sleep, his legs twitching in fitful spasms while out in the fields, not far beyond the campfire glow, gangs of coyotes yipped. If bird dogs can dream – and I believe that they can – the Brittany was almost certainly reliving the day, envisioning the fields and burns and coveys of sharptails that cackled and sailed away like fleeting prayers on polka-dotted wings. 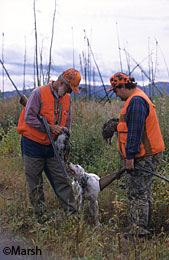 We’d gotten into them early in the day along an old fire road traversing a burn. Knee-high wild rose and berry shrubs flanked the road, offering likely cover and forage for adaptable grassland grouse. Then, in the yellow dust atop the hoof prints of a bison herd, I found a set of three-toed, chicken-like tracks.

Beyond the rose and berry shrubs, the burn was wide open, overgrown with grasses and sparsely punctuated by the dead, spine-like trunks of charred spruces. The country was too exposed for forest grouse – ruffed and spruce grouse share the region – so there was no mistaking what made those tracks. Nose low, Sundance slipped into the shrubs, focused on a scent, moving in fast, ever-tightening circles. I checked my shotgun, a blonde-stocked SKB 20-gauge. The air seemed suddenly electric. I brought the gun to port arms, ready; that little Brittany was not one to lie.

Abruptly, Sundance stopped and turned 90 degrees toward the thick cover. A lone grouse launched on thumping wings. It was a straight-away shot and I never heard the report; just felt my heart beat once, then saw the puff of brown and white feathers.

Sundance fetched the bird and, before the smell of burned powder cleared, I was examining those distinctive polka-dotted wings and that wispy, pointed tail. The yellow combs arched over liquid-brown eyes. The proof was unequivocal: We had found the prairie grouse. Right there in the heart of subarctic Alaska.

Sharptails thrive in places like the Yellowstone country of western Montana where I’ve hunted them on past occasions. Set in the shadow of the Absaroka Range, the autumn air frosty and spiced with sage, the cheat-grass hills form a high-prairie region that probably resembles Alaska’s Ice Age steppes.

Interestingly, paleontologists who ply interior Alaska soils for Ice Age fossils have documented the presence of grassland birds that are likely ancestors of, if not direct precursors, of today’s sharptail grouse and willow ptarmigan. In a fascinating chapter of Interior Alaska: A Journey Through Time, scientists R. Dale and Mary Lee Guthrie write: “Occasionally, pebbles of polished white quartz turn up in the wash screens. For a long time they remained a mystery.” It took some time before experts solved the puzzle. “The pebbles,” write the Guthries, “turned out to be gizzard stones of Pleistocene grouse and ptarmigan.”

In Alaska today, sharp-tailed grouse are found in the Yukon River Valley from the Canada border to Holy Cross. Scattered populations appear in the upper regions of the Koyukuk, Kuskokwim and Copper river valleys.

Although the broad steppes where they once flourished have largely grown into forests, the birds survive in marginal habitats. They prefer open spaces such as old burns, spruce bogs, manmade clearings and fields – places similar as possible to their prehistoric grasslands. Look for them near clearings bordered by cover offering cranberries, blueberries and rose hips. The birds feed on these berries and, early in the fall, range into the fields, burns and meadows to stuff themselves on grasshoppers and other insects. Sharptails can also be found in semi-open areas of stunted spruce and tundra where bugs and berries are prevalent.

Like the prairie chickens, sage grouse, and sharptails of the Great Plains, Alaska sharptails gather in certain areas each spring for breeding. These places, called leks, are in open areas where males attract mates by dancing, fluttering their wings and inflating yellow-green sacks on their chests that resemble yolks fried sunny-side up.

The area I hunted – it’s been several years ago now – was the site of a 1978 state-sponsored agricultural project in which nearly 60,000 acres of timber were cleared for the production of barley. For various reasons, many of the farms failed, and the fields abandoned. Walking along the overgrown windrows, it was hard not to feel in the empty barns and collapsing fences a haunting sense of heartbreak. 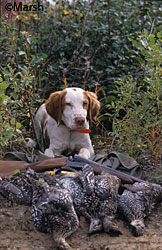 Not all of the barley operations have gone the way of the mammoth. Some have held on while others have been revived. Along the way, bison and coyotes – all prairie denizens – have generally prospered. Though it hasn’t always been that way.

I learned several years ago in an interview with state wildlife biologist Ken Taylor (since retired) that Alaska’s native wood bison, direct descendants of Ice Age populations, died out as recently as 450 years ago. Taylor’s calculations were based on radiocarbon samples taken from the Interior. “I suspect if we had a larger sample size we would have samples that are even more recent than that,” Taylor told me.

Even more intriguing are the stories still passed on among local Athabascans. “We do have some indications from some of the villages that there is an oral history of people hunting bison,” Taylor said. “We’ve talked to some of the elders (and) they remember their distant relatives having done it and passed the stories down. And most oral histories are probably less than 400 years old.”

The roughly 900 Plains bison roaming interior Alaska today were introduced from Montana in 1928. Like the sharptailed grouse, natural habitat is limited to open river plains, burns and meadows of grasses, vetch and sedges. But the Delta barley project expanded habitat for the bison, still prairie creatures at heart. And at the same time, the micro-grassland biome cleared by the hard work of hopeful settlers benefited sharptails in ways that delight upland sportsmen.

After that first sharptail, Sundance and I walked for perhaps three miles along the road through the burn. The overcast September day had grown warm, the walking easy. At one point, the dog put up a pair of birds that I missed cleanly with both barrels. I managed to take one of them on a follow-up flush in the burn where fallen timber created a difficult obstacle course that forced the dog to crawl, snuffling, and me to high-step awkwardly.

By early afternoon, we returned to camp to rest and plan the rest of the day. There were plenty of old fields around to hunt, places edged with berries and cover needed to sustain large numbers of birds. Meanwhile, the nearby Tanana Hills promised good hunting for ruffed and spruce grouse, birds of a different feather that promised their own shooting challenges.

As it turned out, though, the sharptails weren’t through with us yet.

I was sitting, finishing a sandwich with Sundance curled up nearby, resting his yellow Brittany eyes, when I looked up and saw them. Not 30 feet away, over ground we had just hunted, a covey of a dozen or more sharptails appeared, tentatively poking their heads out of the grass and shrubs beside the road.

I picked up my shotgun. Sundance popped up from his bed, ready in an instant. Within a half-dozen steps the air was filled with drumming wings and grouse cackles. Seconds later, as birds sailed over the burn in all directions, Sundance was retrieving the two I had dropped.

By the fire that night, Sundance stopped twitching and the coyotes in the fields quit yipping. The sky cleared, the stars silver and burning as they did 15,000 years ago when interior Alaska was a place of great, furry elephants. From their high places, those stars have seen a lot of changes down here. But as I crawled into my sleeping bag, it was good to know that a few things, particularly little things that cackle and fly on polka-dotted wings, remain very much the same.

Ken Marsh has lived in Alaska since shortly after the last Ice Age and has been fishing and hunting the Southcentral region since before the Parks Highway was built. He has never actually seen a live woolly mammoth and today works as the information officer for the Division of Sport Fish in Anchorage.