Moose, Black Bears and Goshawks
All in a Day's Work for Wildlife Biologists 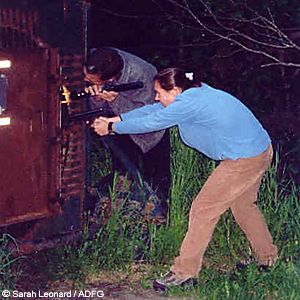 It's 8:15 a.m. and Jessy Coltrane, assistant area biologist in Anchorage, is outside my office door.

"Want to come look for moose?" she asks, glancing at my clothes, with a large mug of coffee in her hand.

She had on her everyday Fish and Game garb - Carhartts and boots. It's not hard to visualize Jessy, a petite but athletic woman, responding to calls about bears in dumpsters and calming residents' fears of marauding moose.

Jessie came to the department with a Masters of Science in wildlife ecology and conservation and a Bachelors of Science in biology. She has worked on wildlife issues in such exotic places as Micronesia and the Amazon.

She is not only good at her job, she's extremely enthusiastic about wildlife and educating people about wildlife-related safety issues - a challenge because of the variety of animals in the Anchorage area. The number of brown bears, black bears and moose in close proximity to 350,000 people creates interesting wildlife encounters.

I wanted a look into the world of urban wildlife management, and this was the day. In her office, Jesse showed me the receiver, antennae and frequency numbers of five moose we were going to locate. We headed outside and piled into a Fish and Game truck with Rick Sinnott, Anchorage area biologist.

The effort today, Jessy explained, was to see if and where the five collared moose had calved this spring.

"Sometimes it's hard to see the females this time of year, because they don't let you get close to check on them and their new calves," Jessy explained as Rick headed up the Hillside, an Anchorage neighborhood where the styles of homes provide their own type of scenic wonder.

We cruised along winding drives surrounded by new home construction, neighborhood elementary schools and city parks, and Jessy held the antennae out the window, listening to the transmitted beeps of a collared moose.

"Which way? To the left?" Rick asked while Jessy maneuvered the antennae and simultaneously fiddled with the receiver knobs as the beeps varied between loud and soft.

"This one loves Flat Top," Jessy said, referring to a popular mountain-top in the Hillside area. "She was up here the last time we looked for her."

Jessy and Rick discussed where one moose had calved the year before, and which wooded area they had found another moose in last time they looked. Simultaneously, they caught coffee mugs sliding across the dash and answered cell phone calls from elementary school principals or residents with bears or goshawks in their backyards.

Between looking for the collared moose and taking phone calls, we investigated a dead moose along a Hillside road, checked out a report of a goshawk attacking a homeowner near Kincaid Park and looked for a potentially injured black bear.

Each wildlife situation was dealt with professionally, calmly and even with a bit of humor.

"Here Sarah, put on this ball cap and head out there," Rick told me as we parked in the driveway of the home of the goshawk attack.

The highlight came fittingly near the end of the day. I struggled to keep up with Jessy and Rick as they easily hiked through boggy, thick brush tracking a moose and her calves. Jessy hiked with her head down, the cumbersome receiver antennae in one hand and the radio in the other. I concentrated on keeping track of her bright orange baseball cap. Suddenly, after several quiet minutes, we were racing up to higher ground to catch sight of the moose.

"See them?" Jessy pointed excitedly across the brush. In the short distance, we made out the large, brown form of the female moose, with two delicate calves in tow, their shapes moving in and out of the trees below.

The next thing I knew it was already 4:30. We pulled back into the Fish and Game parking lot, a little more muddy and tired than when I started, but happy for the chance to see Jessy and Rick in action.