An Alaska Ambassador Goes to Sweden 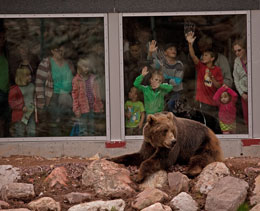 The future ambassador didn’t realize at the time of his rescue that he was being saved by the world’s foremost expert on Kodiak bears. Simultaneously, his rescuer didn’t fathom that the heart-wrenching saga would result in an internationally orchestrated event years in the making.

It all began in November 2010 when Dr. Larry Van Daele received a phone call at his Alaska Department of Fish and Game (ADF&G) office on Kodiak Island. He learned that a bear sow had been shot about 20 miles south of town in a “Defense of Life or Property” incident, leaving behind three orphaned nine-month-old Kodiak bear cubs. Van Daele traveled to the area with his team, but the cubs were wily and evasive in the thick brush, and they were only able to capture one of the cubs. The little guy was subdued by a tranquilizing dart and brought back to town. After a short time in Kodiak, Northern Air Cargo transported him to the Alaska Wildlife Conservation Center (AWCC) near Portage, Alaska, an hour drive southeast of Anchorage.

The Yup’ik word for brown bear, Taquka (to-COKE-ah), quickly became the name for this orphaned cub and would eventually be spoken by thousands across the world, including mayors, governors, and diplomatic officials.

Five years before that fateful rescue a courtship was brewing. Representatives from the Orsa Grönklitt Bear Park in Sweden visited Kodiak Island and expressed interest in obtaining Kodiak bear cubs for display at a permanent home. Van Daele explained to the Swedes that such an opportunity was rare, but despite the caution, Orsa Grönklitt continued their pursuit.

ADF&G is the permitting authority responsible for the placement of Alaska’s orphaned animals. The department operates under stringent protocols to confirm a facility is financially sound, can provide the best care for the animal and is able to deliver a public education benefit. After years of close communication with the department, Orsa Grönklitt demonstrated they were the real deal. It was determined that even though providing an orphaned bear to a country halfway across the globe was going to be a logistical headache, it would be worth the challenge.

As Orsa Grönklitt started the process of designing, fundraising, and constructing an expansive facility, Taquka found his new, albeit temporary, home at the Alaska Wildlife Conservation Center. Staff not only conditioned him to be a good zoo bear, but also to be comfortable around other animals and people. During his 18-month stay, he warmed the hearts of visitors and staff alike as he reveled in the human attention and entertained all with his antics and interest in learning exciting ways to interact with his new environment.

Meanwhile as the bear park project was underway, Anders Björklund, head of the Carnivore Center at Orsa Grönklitt, emphasized a few key objectives for their new facility. Foremost in the design was a large natural-type enclosure for the bears. The resulting layout included three acres of hills and grasslands, as well as three ponds connected by streams and plenty of places for bears to hide if they wanted to be away from people. Park administrators wanted to ensure the natural behaviors of the bears by incorporating enrichment activities, such as hiding food in special places and putting out live trout once a week in the fish ponds so the bears would have the opportunity to hunt. Another goal was to put numerous bears together so the socialization opportunities would be endless. The park also sought to promote public education through the many interpretive panels (in both Swedish and English) revolving around themes such as Alaska, Kodiak bears, ADF&G, and sustainable salmon management. 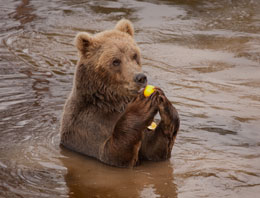 While Taquka’s story is heartwarming, such successful matchmaking is a rare occurrence. Wild bear cubs might be cute and cuddly in the beginning, but they turn into massive adult bears. Almost all cubs that are orphaned in the field die in the field, either because they cannot be found or because there are not any good long-term homes for them. “It makes it even more of a tragedy when any animal, but especially a bear, is orphaned because of negative human-bear conflicts,” Van Daele said. “Everything we can do to prevent orphaned cubs is to our advantage.”

Bears in captivity can live more than 30 years and require a long term and expensive commitment. “We are strict in where we allow our animals to go,” Van Dale said. “We don’t want to see our critters abused, and we don’t want to condemn a bear to a life in prison. It’s a public resource, and we have a responsibility to treat the animals in the most respectful way we can.” Orsa Grönklitt’s passion for teaching people about bears, their corporate culture, and the dedication of their staff to the animals’ welfare were all traits that shone through in the decision-making process to place Taquka abroad.

Matthew Van Daele, Larry’s son, has unsurprisingly followed in his father’s footsteps as a biologist and was also active in Taquka’s internationally-organized relocation. Matt, who started his career at ADF&G in high school, college, and graduate internships, currently serves as an environmental scientist for Koniag, Inc., one of thirteen Alaska Native Regional Corporations created under the Alaska Native Claims Settlement Act of 1971.

In the 50 years since Alaska’s statehood, ADF&G has been a caretaker of the animals of Kodiak. For the 7,000 years prior to that, the Native people of Kodiak were the stewards of this important resource. Naturally, the Kodiak brown bear is an important cultural icon for the Alutiiq Natives, and the corporation recognized Taquka’s role as a respected representative of their traditional way of life and sought to introduce the cultural side of these majestic bears to the world.

“Another reason for this trip abroad was to increase international cooperation in terms of bear research and management and education, but also to raise awareness overseas that Kodiak bears are a success story,” said the junior Van Daele, who attended the event in Sweden. “We have an obligation to be sharing what we have learned so that people can apply what works for us and hopefully be able to use that in their situations, too.”

The difficult task of raising international awareness wasn’t the biggest challenge, however. “Our number one predicament was trying to figure out how to get a 400 pound animal from here to there,” Larry Van Daele said. To solve the problem, AWCC’s Director of Development, Steve Mendive, had a large aluminum crate specially designed and built to be aircraft certified. After much coordination, in mid-June FedEx flew Taquka, Mendive, and Taquka’s handler, Dr. Jordan Schaul, to John F. Kennedy International Airport in New York. Scandinavian Airlines was slated to fly Taquka from New York to Stockholm. Unfortunately, in true Murphy’s Law fashion, the aircraft to Stockholm had a mechanical problem and was delayed in New York City for 24 hours.

Grounded on the East Coast unexpectedly, an Alaskan brown bear in an aluminum crate in 80 degree heat warranted clever problem solving. In a resourceful turn of events, a refrigerated van was rented so that both the bear and his Alaskan chaperones could chill out while the plane was being repaired. Taquka was so well trained that his handlers were able to open the crate partway and completely change his straw bedding without tranquilizing him. 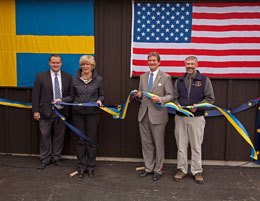 En route across the Atlantic Ocean, the Swedish pilot occasionally went down to the cargo hold to check on Taquka, likely giving him Swedish lessons along the way. Once in Europe, the Grönklitt experts immediately retrieved Taquka for the five hour drive to the center. “We were communicating in real time. None of us slept for two days,” Van Daele said.

When Larry arrived in Orsa a couple days later for the grand opening, both he and Taquka were apprehensive. Grand openings of this scale were notorious for being anti-climactic as animals are usually in hiding for the first few weeks of their placement, a disappointing reality for ceremony goers. Taquka was initially pacing along a remote part of the fence line, but soon all the human-bear interaction training paid off. As the day progressed, Taquka became more comfortable with his newfound surroundings.

“As soon as the 250 invited guests started showing up, it’s like a light bulb went on in Taquka’s head,” Larry Van Daele said. “He went right over to the people along the main viewing area, and once the ceremonious fiddle playing started, he did everything short of tapping his foot.”

Rather than host a ribbon cutting ceremony, Orsa Grönklitt opted for a highly symbolic ribbon tying ceremony. The Swedish ribbon, like their kingdom’s flag, was blue and yellow; the Alaska ribbon was hand-stitched with blue and gold symbolizing the eight stars of gold on a field of blue in Alaska’s state flag. As traditional music played in the background, the two ribbons were tied together in a bow, signifying the value of ambassadorship and the relationship between Northern peoples.

During the ceremony, Deputy Chief of Mission William R. Stewart of the U.S. Embassy in Sweden proclaimed, “You’ve come to Sweden at a very good time, Ambassador Taquka, because Sweden currently is the chair of the Arctic Council where it works closely with the United States and other nations and indigenous peoples to protect and preserve the Arctic ecosystem. You are an excellent example of cooperation between the United States and Sweden, setting a diplomatic example for all of us to follow.”

Orsa Grönklitt has over 180,000 visitors annually from across Europe and the rest of the world and is an amazing opportunity to showcase Alaska. Indeed, this is the beginning of a long relationship between our two countries, and Taquka will experience it firsthand. Since he grew up with another enclosure mate while living in Portage, the decision was made that he would get two Swedish girlfriends. His new mates are also orphaned brown bears around the same age, very sociable, and have had similar training. “Companionship will be very important to these bears. They will have a good life,” said Pernilla Thalin, Orsa Grönklitt’s park chief.

Larry Van Daele commented on his fondest memory of Taquka. “When we were able to capture him I knew almost immediately he was going to go to a good facility, and that we were taking advantage of a rare opportunity to help both this bear as well as wild bears. That was a good feeling.”

Candice Bressler is the statewide Workforce Development Program Coordinator for the Alaska Department of Fish and Game and is based in Juneau.