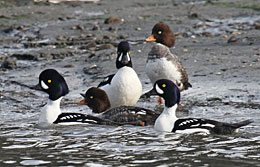 On an early spring day a flock of black and white ducks bobs in the waters of the Gastineau Channel near Juneau. They’re goldeneyes, and a closer look reveals a mixed flock of Barrow’s and common goldeneyes. An even closer look reveals that one duck sports a short antenna. In coming months, this duck will provide biologists with a wealth of information about the migration ecology of Barrow’s Goldeneyes.

In April, biologists surgically implanted small satellite transmitters in 35 Barrow’s goldeneyes in the Juneau area. The devices are programmed to activate for two hours every four days and transmit the location and body temperature of each bird. It appears that many of these goldeneyes tagged near Juneau in April are now spending the summer in the Canadian Arctic between the Beaufort Sea and Great Bear Lake – more than a thousand miles to the north.

“We’ve got several males that just moved into the Yukon Territory, some females appear to be in the North West Territories and the Yukon Territory as well,” said state wildlife biologist Jason Schamber. “Most of those males are not far from the coast.”

Schamber works with Dan Rosenberg and Mike Petrula with the Alaska Department of Fish and Game’s Waterfowl Program. They’re part of a team of researchers that includes Alaskans Tim Bowman with the U.S. Fish and Wildlife Service and Jerry Hupp with the U.S. Geological Survey; as well as Dan Esler with Simon Fraser University in Vancouver, British Columbia, and Sean Boyd with Environment Canada.

The biologists want to better understand where Barrow’s goldeneyes nest and raise their young, where they spend winters, and how they move within and between these areas. Animals that consistently use specific areas tend to be identified and managed as discrete populations, and goldeneye populations are not well understood. There is much to learn about the population dynamics and ecology of these sea ducks, and it’s important to identify areas that may be particularly important to these birds. They also want to learn the degree to which the birds use the same areas year after year, something known as site fidelity.

Fidelity is one important component maintaining that distinctiveness between the populations. “It allows us to delineate between discrete management units,” Schamber said. “Do we look at them as a whole, Pacific-wide population, or as smaller subpopulations of the Pacific population? If their population dynamics are different, we might manage those subunits separately.” 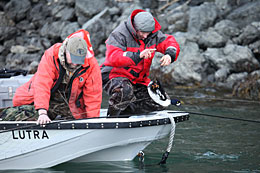 Conservation of areas is another future step, Schamber said. “Once you determine these populations are using these areas across years, independent of other populations, you can examine whether or not development or industry might have impact on that population.”

While common goldeneyes are broadly distributed across North America, Barrow’s goldeneyes are much more limited in range and spend winters almost entirely in coastal areas. Juneau proved to be a good place to find Barrow’s goldeneyes in April. The core of their winter range is coastal British Columbia to northern Southeast Alaska, with some scattered populations in Prince William Sound and lower Cook Inlet. The ducks winter in near-shore marine habitat – bays and inlets – and move from saltwater to freshwater and back.

“We saw some flocks of a couple hundred ducks by Point Hilda (on Douglas Island), and one flock of four or five hundred,” Schamber said. “We’d find a flock of hundreds of birds one day and the next day they’d be gone. That’s not too unusual that time of year; they’re getting antsy to head out.”

The ducks migrated to their nesting and summering areas between late April and mid-May. When they left, almost three dozen of the goldeneyes each carried a 26-gram transmitter, about the size of two double-A batteries side by side. At just under an ounce, this is about two or three percent of the duck’s body weight. The transmitters are programmed to potentially last three years.

The ducks were caught using mist nets set up on floats on the water. The nets, about 36 meters long and three meters high, are nearly invisible, especially in the pre-dawn light of the capture operation. The biologists set up goldeneye decoys near the nets to help attract ducks. As soon as a duck was caught in the net, biologists skiffed over and extracted it.

“The surgery itself takes about half an hour,” said Schamber. “Then there is a recovery period from the anesthesia of about an hour, and then the duck is released at the capture site.”

The transmitters are an incredible tool for biologists. Researcher Dan Esler has worked for decades with a variety of sea ducks. He's also involved in several projects that involve satellite-tracking scoters in British Columbia and Alaska. He said an array of satellites receive the signal from the duck’s transmitter, pinpoints the bird’s location, then sends that information back to Earth for the scientists. 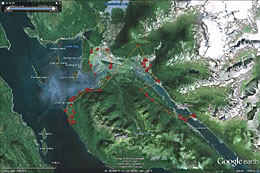 This map shows the locations of one of the tagged goldeneyes as it moved around the Juneau area. The Juneau airport and Mendenhall wetlands are near the center of the frame, with Douglas Island below, Stephens Passage to the left and Gastineau Channel to the right.

Another tremendous advantage is that the device does not need to be retrieved to collect the data, and the information becomes available within days. Data from the ducks tagged in April shows that many of the ducks moved short distances around the Juneau area where they were captured for a few days or weeks, then headed north. One of the ducks covered almost 1,300 miles in just a week, another 900 miles and another almost 800 miles.

Like most sea ducks, the males leave the females shortly after the females start incubating eggs and move to molting areas. They are unable to fly for a brief period while they grow new feathers. Females will lay and incubate the eggs in a tree cavity.

“They’re cavity nesters,” Schamber said. “They find deadfalls in the boreal forest, or standing dead trees that are typically around fresh water.”

Goldeneye chicks are precocial, meaning that when they are born they are far more proficient than the nestlings of songbirds or raptors. An eagle hatchling is entirely dependent on parental care for several months, for protection from nest predators and daily feedings; but a baby duck can swim, walk, forage and feed itself immediately after hatching. They jump out of the nest cavity and follow their mother to water. After growing rapidly in the short summer in the Arctic and sub-Arctic, they’ll head south in their first migration.

Provided they survive mishaps, marauding eagles and other predators, for the next three years the tagged ducks could provide a fairly detailed map of where they go and how long they spend there.

Including the captures in Southeast Alaska this spring, more than 235 transmitters have been deployed in this project over the past six years at five different locations. And as the information continues to roll in, biologists will develop a better understanding of the movements and ecology of Barrow’s goldeneyes.

Riley Woodford is the editor of Alaska Fish and Wildlife News. He saw his first common goldeneye with her ducklings on a backcountry lake in the Oregon Cascades in the mid-1970s and has been a fan of goldeneyes ever since.