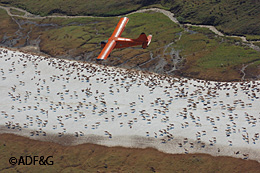 Flying over the Western Arctic Herd. To conduct the census, animals are photographed from the air with a special mapping camera and then counted on 9 by 9-inch contact prints. In a process that takes months, the photos are laid out and overlap lines are drawn so animals are not counted twice or missed.

Alaska‘s largest caribou herd, the Western Arctic Herd, numbered about 325,000 animals as of July 2011 according to a census recently completed by the Alaska Department of Fish and Game. This represents a five percent decline since the last census was completed in July 2009, and a continuation of the four to six percent annual decline since it last peaked at 490,000 caribou in 2003. This trend is consistent with annual estimates of increasing adult cow mortality and declining calf survival.

State wildlife biologists have good reason to believe the count numbers are accurate. Caribou bunch up in tight groups in summer in response to harassment by flies and mosquitoes. Radio collared caribou within the herd help biologists flying aerial surveys locate these groups. The number of known collared animals relative to the number actually found is an indicator of completeness.

“Out of 97 collared caribou, we found 96 of them during the census,” said biologist Jim Dau, who has worked with the herd for decades. He said that remaining collared caribou was later located as well.

Animals are photographed from the air with a special mapping camera and then counted on 9 by 9-inch contact prints. In a process that takes months, the photos are laid out and overlap lines are drawn so animals are not counted twice or missed. In this recent count, the photographs were very clear. These factors suggest that the 2011 census was reasonably accurate.

The Western Arctic Herd ranges over a 140,000 square-mile area bounded by the Arctic Ocean, the lower Yukon River and the trans-Alaska pipeline. About 40 communities and 13,000 people live within its range. For the indigenous people of these communities, the herd is both a vital link to their cultural heritage and a staple source of food. The Western Arctic Herd is also important to visiting resident and nonresident hunters, and is an important source of income for commercial operators that provide services to them. Because of its tremendous size, the ecological importance of the Western Arctic Herd to Northwest Alaska is incalculable. Although they are important prey for wolves and bears, Western Arctic caribou directly and indirectly impact the entire food web through nutrient cycling - affecting organisms from bacteria to vegetation to moose. 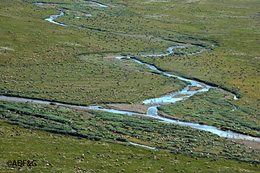 A portion of the Western Arctic Herd

Even though the Western Arctic Herd has numbered over or around 300,000 caribou since 1988, health assessments conducted by the department and reports from hunters indicate that the body condition of caribou from this herd remains good.

There is no indication that this population decline will reverse anytime soon. In addition to icing events and relatively high numbers of predators, the Bureau of Land Management has documented measurable long-term changes in winter range condition, and demand by hunters for food and recreation has remained stable despite the declining number of caribou. Although this herd is still very large, the department is cautioning people that it may become necessary to reduce harvests in the future if this trend continues.

“Harvest has been pretty liberal for the past 20 years, but if the trend continues the state is definitely going to respond,” said Dau. “We’re not anticipating restricting any hunting right now though.”

Dau said subsistence harvest has been between 14,000 and 16,000 caribou per year for a long time. Harvest by others who don’t live within the range of the herd has been less than 800 per year for many years.

“Caribou harvests from this herd by nonlocal hunters are very small compared to the subsistence harvest,” Dau said.

A management plan is in place if it becomes necessary to limit harvest opportunities, thanks to the work of the Western Arctic Caribou Herd Working Group. The group includes subsistence users, other Alaskan hunters, reindeer herders, hunting guides, transporters, conservationists, biologists, and natural resources managers. The group meets once each year, with additional sub-committee meetings as specific needs arise.

“We just spent over two and a half years updating a management plan that outlines how we would recommend restrictions in the future should that become necessary,” Dau said.

Part of that plan recommends additional scrutiny of the herd as numbers decline. Some types of surveys are conducted annually while others only need to be repeated every two or three years.

“As soon as we saw the first evidence of a population decline, we decided to census this herd more often,” Dau said. “Regardless of how frequently we census this herd, we estimate calf survival (recruitment) and adult cow mortality annually.That fills in the gaps between censuses and also helps explain what’s going on with census numbers – is the population declining because adults are dying or because calves aren’t surviving?”

In this case it appears both adult mortality and calf recruitment are factors.

The next census is scheduled for 2013.

Riley Woodford is the editor of Alaska Fish and Wildlife News. Jim Dau is a wildlife biologist with the Alaska Department of Fish and Game, based in Kotzebue.