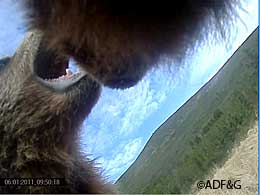 A collar camera image of a cub playfighting with his mother. This was captured from a 10-second video clip. The four collared bears provided about 12,000 short video clips recorded between mid-May and Mid-June, 2011.

A sunny, pond-ice melting day in late May and Boar 6041 was not long out of hibernation. This mature, 700-pound brown bear smelled a sow, her breeding scent mixed with meat. Caribou, already dead. He found her, bred and ate caribou. Over the next few weeks, he bred many times with at least three other receptive sows, and likely more, in the Copper River Basin of Southcentral Alaska. He also killed and ate another bear, a number of newborn moose calves, a few caribou calves, a hare and a beaver – and he scavenged a dead moose and a pile of winter-killed fish.

An innovative device documented the action - a collar mounted video camera and GPS unit. Every 15 minutes for a month, the unit recorded a 20-second video clip and a waypoint. In mid-May this year, Alaska Fish and Game biologists equipped four brown (grizzly) bears – a lone sow, two sows with one cub each, and 10-year-old Boar 6041– with collar cameras. When the cameras were retrieved in mid-June, biologists downloaded almost 12,000 video clips.

Biologists want to understand the effects of high hunter harvest rates on this bear population as well as the bears’ impacts on the moose population in this area. This pilot study using these new devices is part of the Nelchina Brown Bear Project, and it promises unprecedented insights into their behavior.

State biologist Bruce Dale said viewing the videos is highly addictive. “The clips are quite short, so you only get a glimpse of what they are up to. If they are not sleeping, you really want to see the next clip to find out what happens next.”

As Dale viewed the clips, a couple details jumped out. “It’s surprising just how active they are when they are active, they are doing something with purpose,” he said. “It was also surprising the lack of time spent foraging on vegetation, they are not spending a lot of time digging tubers and that sort of thing. Instead these bears are eating lots of meat this time of year.”

Who are these bears and why study them?

That predatory and scavenging behavior is a key aspect of the study, especially when it comes to newborn moose and caribou calves. Calf mortality research documents that up to 85 percent of the moose calves born in the study area die before autumn and most are killed by brown bears. Bears show different dietary preferences and abilities to catch prey, and how these traits are acquired is of keen interest to biologists. Parenting plays a role, but watching bears shows that enterprise and opportunity play a part as well.

“We have sows that kill, boars that kill, young ones and old ones that kill," said state biologist Becky Schwanke. "We have two- and three -year-olds observed on kills the very first year away from mom.”

Schwanke has watched a lot of bears. She grew up hunting and fishing in Alaska, and lives in Glennallen, where she’s the area wildlife biologist for Game Management Unit 13 and for this study. The project area is bordered by the Little Nelchina River on the south and extends 40 miles north to the Susitna River. Over the past five years, Schwanke has monitored 137 study bears in this area, most via aerial surveillance using VHF radio collars, which allow biologists to find the bears. Researchers have located Boar 6041 66 times since the spring of 2007, providing a wealth of information.

“This boar has been observed on nine fresh kills over that time, four adult ungulates (moose or caribou) and five moose calves,” she said.

Predatory behavior varies from bear to bear, and some bears have never been seen on a dead moose or caribou.

For the past few decades, VHF radio collars have enabled researchers to locate bears and other animals. In the Copper River Basin, an airplane helps, but the observations are fleeting.

“We tend to make assumptions about what happened," Schwanke said. "We’ll fly over with a Super Cub, they’ll be eating an ungulate, sometimes it’s pretty obvious, there’s a calf and a cow moose standing nearby, other times it’s a bury pile. Sometimes you find a two- or three -year-old on a kill and he’s pretty antsy - he’s come across it maybe knows he shouldn’t be there, he didn’t kill it but found it.” 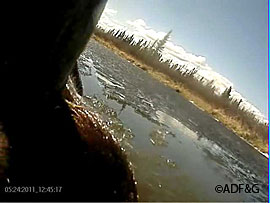 Flying over an animal once or twice a day provides a three-minute snapshot of life, Schwanke said. "It's such a conundrum. What are they doing the rest of the time? And specifically, what are realistic kill rates for bears taking moose calves?”

The new GPS collar cameras may help answer those questions. Three were programmed to take a 10-second clip every 15 minutes, one took a 20-second clip. Each camera shut down for a few hours every day to extend battery life. The clips show the bears’ chin at the side of the frame and what the bear sees in front of it.

"We’re very curious if we can link known siblings, sons, and mother daughter pairs,” Schwanke said. “We have quite a few collared bears that have never been observed on kills. If we have a sow we’ve never observed on a kill, is it likely that her offspring are going to be ‘ground squirrel killers’ – eating ground squirrels and eating sedges, berries and roots, as opposed to bears that are consistently killing and eating ungulates?”

Bear 6007 is providing some insights. She’s a prolific mother, and four of her offspring have been collared as 2-year-olds. Bear 6007 is good at killing ungulates, and the same seems to be true now of three of her four offspring.

“Bears must learn life skills from their mother. We suspect predatory characteristics are among these skills,” Schwanke said.

To test the new technology, the four camera bears were chosen specifically because they are known predators and the cameras were deployed at a time of high predation. While these bears provide insights into predatory behavior, they do not represent the behavior of all bears.

What do Bears do?

State biologist Chris Brockman reviewed and sorted many of the clips and summarized the behaviors as sleeping, eating, moving and breeding. Two of the study bears, the lone sow and the boar, were sexually active and engaged in a tryst with each other.

“Bears do a lot sleeping and a lot of staring at trees,” he said. “There’s a good portion of each day where there’s not a lot going on. The activity didn’t seem to have real specific times, some bears were active through the night and others slept through the night. Some would eat a calf and nap four or five hours, then get up and move. They sleep eight or maybe ten hours a day, at any time during the day.”

Like a flyover, the clips represent a moment in time. Many clips show bears eating, a few show them hunting, and even fewer show them actually killing.

Brockman suspects the bear smells the moose and hones in, speeding up as he approaches his prey. “We couldn’t see it in the camera footage, but he knew it was there. It was lying down, hiding, and he knew it was there and just ran over and grabbed it. Once he knew where it was and that it was close, I’d say it didn’t have a chance. We didn’t see cows, which leads me to believe the cows don’t seem to be challenging him, or perhaps we were seeing calves that were not immediately accompanied by the cow.”

Brockman said one of the sows and her cub spent a week basically parked on a moose carcass, and the clips show a steady progression of their feast. The GPS data will corroborate exactly how much they did or didn’t move, and this winter biologists will process the footage. 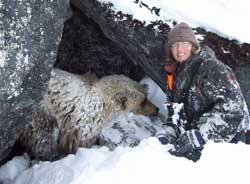 Biologist Becky Schwanke with a study bear in winter.

The clips also show that the sows tolerated a lot of play fighting and wresting with their yearling cubs, but the abuse took a toll on the cameras. “The two (collars) with the sows with cubs failed at some point,” Brockman said. “You’ve got the cubs wrestling with mom and that collar is right in the middle of it. We probably need more armor on those.”

The cameras recorded sound, including some rather brutal reminders of life and death in the wild. But Brockman was surprised by some of the audio.

“I was really surprised at how little noise the bears make, mainly you just hear brush whacking on the camera. I’d think with the placement by their mouths if they were making noise we’d hear it.”

“Part of the goal of the pilot study is to determine what the best video schedule would be,” said Brockman. “I would love to set a camera to go into a sleep mode when the bear is inactive.”

“The one thing we’ve all talked about is to have a camera turn on when the animal’s heart rate goes up,” Schwanke said.

The devices are manufactured by Lotek, and while these units were prototypes, Lotek released a commercial model this spring. Mario Henriques and Oana Bantus of Lotek said that some improvements are in the works, including stronger housing, better electronics, and doubling the memory from 16G to 32G. Shutting the camera down during periods of inactivity is a priority. They said running the camera nonstop would only provide about 32 hours of footage - a 30-second on, 30-second off mode would be more practical.

State wildlife biologist Sean Farley worked on an early prototype of a collar camera and tested a unit on a black bear in the Anchorage area a few years ago – with the Unit 13 bears in mind. That camera took still images at timed intervals and showed promise. Farley’s not involved with the Nelchina Brown Bear Project anymore, but he’s watching the developments closely.

“We know that bears eat ungulates, but we have an incomplete understanding of predator success rates, degree of intake, and even the searching and attacking strategies used by bears to take calves and adults,” he said. “The camera collars, when paired with data on diet, genetics, and productivity will be a real boon to improving our understanding of predator-prey dynamics.”

Researchers collected hair and blood samples from the study bears before and after moose calving season. They've also been collecting DNA samples to evaluate genetic variation between bears in the Copper River Basin and to better understand how bear migration into and out of the area affects bear population dynamics.

It won’t be hard to find the study bears next spring. Schwanke and her colleagues have 22 bears equipped with radio collars. This pilot study shows the technology has potential to provide insights into little-known reproductive behaviors as well as predator-prey dynamics between bears, moose and caribou.

“It’s got amazing promise for learning about all aspects of bear behavior,” Brockman said. “Especially predation, since they eat the evidence.”

An assortment of nine short bear video clips are available for viewing. Two feature sows playing with a cub, several feature scavenging and feeding, and several feature encounters with other bears.

Brockman has assembled a set of clips, all recorded on May 26 by Boar 6041, into a 24-hour vignette, “A Day in the Life of a Bear.” That 13-minute video can also be viewed there. Give it time to load before starting.

Riley Woodford is the editor of Alaska Fish and Wildlife News and produces the Sounds Wild radio program.